Deprecated: The $control_id argument is deprecated since version 3.5.0! in /home/oq5ayjaeetjt/public_html/wp-content/plugins/elementor/modules/dev-tools/deprecation.php on line 304
 The Extract Trial: Not Guilty - Cannabis Digest
Skip to content

In April 2012, our argument for extracts had been successful in the BC Supreme Court, effectively legalizing medicinal cannabis extracts for federally licensed patients, and eventually their caregivers, in British Columbia. However, the judge ruled that my trial should proceed regardless of the constitutional victory because “society’s interests in having the charges against Mr. Smith tried on their merits outweigh the violation of Mr. Smith’s liberty right, at least sufficiently to deny him the judicial stay he seeks.”

We assumed that because only about 10 percent of the members of the V-CBC have federal licenses, we would still have some explaining to do. The rest of the club members have been diagnosed with permanent physical diseases or disabilities. With this large community of people standing behind us, each awaiting a chance to explain how at the end of their long painful paths they’ve persevered to find that cannabis works for them, we prepared for the Jury Trial.

The members would help us present the defense that it was necessary for me to break the existing law in order to prevent their ongoing suffering. The classic example of the defence of medical necessity is “To steal a loaf of bread to feed one’s starving family,” though in my case, nothing was stolen, and an entire community were benefiting. We reasoned that it would be difficult to find 12 people who don’t have someone among their friends or family who have benefit from using medical cannabis. 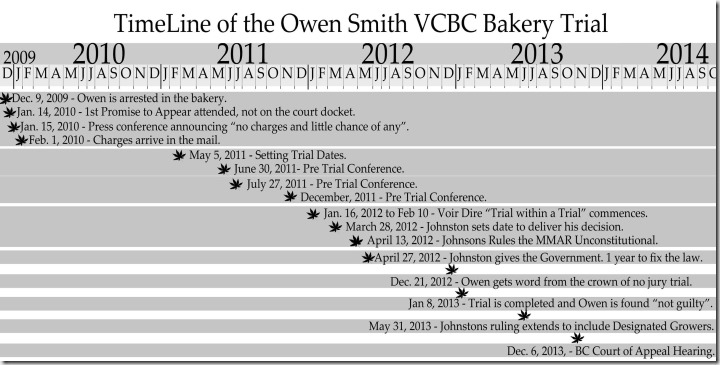 Nine months later, On Dec. 21, 2012, I received a phone call from my lawyer Kirk Tousaw, revealing that the Crown did not believe they could convict me, promising an acquittal and cancelling the jury trial. At the short trial in Jan. 2013, I was found not guilty after the Crown chose to present no evidence. The Crown explained that because the judge had ruled the law unconstitutional, their case was “significantly impacted” and by using the common law defense of necessity, I would only win. The judge didn’t look impressed.

The Crown then entered their appeal and prepared to ask the higher court to overturn Judge Johnston’s decision and order a new jury trial, one where Johnston’s decision would no longer exist. They did not appeal the solid scientific facts of the case. The Crown appealed on the basis that the law had been misinterpreted in a number of ways by the BC Supreme Court Judge.

Being found not guilty was a victory but the issue of my personal relationship to the charges would resurface a few weeks before the BC Court of Appeal hearing. The court asked whether a person who is not in any way licensed under the federal regulations can be allowed to challenge those regulations in the first place. There is existing Supreme Court of Canada precedent on the issue of standing in the case of Dr. Henry Morgentaler.

by Ted Smith One of the most important figures in American hemp history is Lyster Dewey. His efforts to revitalize hemp brought a new wave of interest in the plant at the turn of the 20th century. Farmers and industrialists alike were drawn to his vision. As the person in charge of the USA Department […]