The War Of The Flowers

At 10:30 on the morning of October 3rd, 2017, Cannabis Culture on Bank Street in Ottawa was raided – again – by the brave and heroic Ottawa Police Service as part of a set of four busts across the city that day. Having eliminated every other crime in Ottawa – solved every murder, caught every bad guy, and having the odd distinction of being the only police force in Canada to have eradicated their city’s fentanyl problem – Ottawa’s Boys In “Brass Knuckle” Gloves have once again set their sights on the dangerous and dastardly Marijuana Dispensaries. Arrested at CC and release the same day on bail are Nick Massia, Taryn Morrison, Anthony Floyd and two others. Three of the five were back working at CC just thirty hours later when it re-opened, in brazen violation of bail conditions.

If you noticed a hint of sarcasm in the previous paragraph: good catch. The reason I am so snarky about this is that I can no longer take it seriously. Police are merely embarrassing
themselves by using up time and money on something that presents no danger to the community, offers a badly-needed, widely-desired, and frequently-used service, and – if 12
court rulings are any indication – is technically legal. 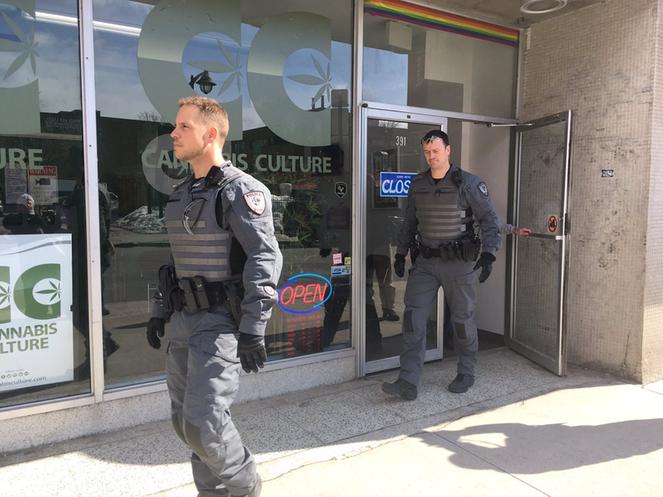 But at the same time, they have to keep up the public facade of “upholding the law” and “protecting the public”, tasks which conflict directly when it comes to busting marijuana dispensaries. The cops are smart enough to know that these places serve a purpose and are wanted by the community (who have been lining up to patronize the 17-20 dispensaries operating at the time of this writing), and that they will never be able to get rid of them all. But they also have to show the public that they are still In Charge. If they were seen on TV shrugging and saying “We can’t stop pot dispensaries, so we don’t bother enforcing that any more.” they would look like shiftless boobs unwilling to do their jobs, on one hand, but realistic and priority-minded on the other.

This bust comes on the heels of the Ontario Government’s public declaration of war against dispensaries in early September, but it is likely that the Ottawa Police were investigating Cannabis Culture in preparation for this bust for many months.

I understand the Ontario Government’s public insistence that dispensaries are illegal and they will all be shut down, however. I don’t like it, and think it is insane and dangerous, but I understand it. They are the government. They cannot just come out and say “Yeah, sure, we’re gonna get to the dispensaries and lounges eventually…” because if they had, then 2000 new dispensaries would open across Ontario within a week! There would be a price war, quality would drop, places that have been around for years would go out of business, replaced by three McPothead’s on the same block. Also, they are the government! There is no way they are going to shrug about something that most people still think is illegal, looking like they are siding with the civil disobedients. Sure, ok, it is only pot, but it sets a precedent that they simply want no part of.

So they wag a finger, they make laughable, toothless threats, and then drop a flaming turd of a proposed regulation scheme to replace the dispensary system that is working quite well. And bless them for it, because it blew up in their faces.

Their plan, of course, is to replace the existing dispensaries with a Crown Corporation
similar to their booze monopoly LCBO. 40 stores opening on July 1, 2018, with up to 150 more
stores across the province by the end of 2020, that would sell pot that came only from
ACMPR-licensed growers. It is nonsense. Those stores would serve about 1% of the market
that exists today, and the market is growing fast. The plan’s projected startup costs and
operation overhead promises to eat up any and all potential tax revenue.

Even right wing pundits, who would be entirely against the legalization of pot under normal circumstances, were decrying the plan as ridiculous, embarrassing, expensive, and insulting. The Ontario Conservative opposition is now stuck in the awkward position of having to defend dispensaries as “small businesses” being “pushed out” by a “government monopoly”… for marijuana! The whole thing is nonsensical! 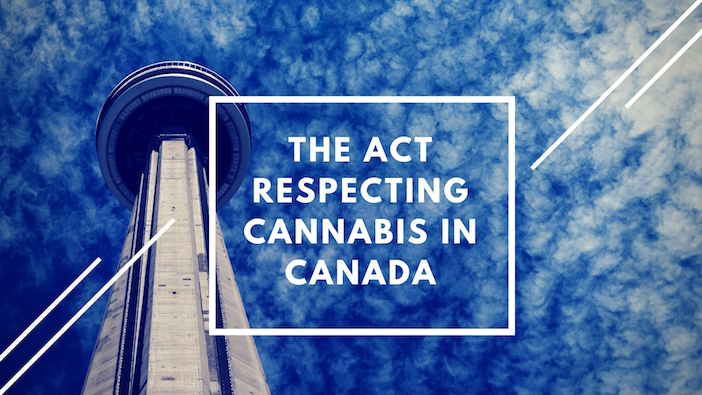 Of course, it is merely a proposed regulation, and by the time they try to implement it, the whole thing is likely to change drastically. The government’s alcohol monopoly served Ontarians so badly that the government have made ongoing modifications to the regulations for years, allowing beer in small corner stores, wine kiosks in grocery stores, and other access increasing provisions in a province with a large and expensive booze-related public health problem.

But, being the government, they can’t even discuss the option of regulating dispensaries until pot is actually 100% fully legal at the federal level. Which seems odd, because the cities of Vancouver and Victoria seem to have figured something out, officially regulating several dispensaries in each of those cities.

Personally, I think C45 won’t pass the tory-stacked Senate because it was designed not to. The CPC have made it pretty clear that they won’t pass any bill that allows home-growing, and I think the Trudeau government were counting on that when they had cops and corporations write it for them. The Liberals don’t want this bill to pass – yet – because, if the many media reports about projected shortages of pot on the first day of legalization is any indication, their LP cronies can’t get enough pot grown between now and July 1st of next year.

Think about it: if the bill fails to pass the Senate, then the Liberals can campaign through the next election on “finishing the job” of legalizing pot. They can point to all the hustle and work they’ve put in to this project throughout 2017, blaming the tories for “stalling a crucial bill” that would “protect children” and “get organized crime” out of the game.

Potato-faced goon Andrew Scheer’s message of reduced civil rights and liberties for every Canadian is not likely to resonate with voters, so (the election of Jagmeet Singh to leader of the NDP notwithstanding) we are pretty much guaranteed another Trudeau government after the next election. By then, the Senate is likely to be Grit-stacked, so the LPC can pass their revised Cannabis Act through both houses quickly, timing it so that their LP cronies can get their wares ready to sell to the public. Sure, they might only make a 15-20% dent in the existing pot market when 2020 comes, but it is better than the .6% dent they would make if they tried to jump into the recreational market next summer.

You’ve got to hand it to the Liberals… their plan is pretty elegant. It is smart politics, and really smart cronyism, even if it is horrible public policy.

Next article Growing Cannabis: A Gateway to Gardening

Papa Puff·1 week ago
There are 4 comments 4 comments

Why Not Hemp Paper?