Deprecated: The $control_id argument is deprecated since version 3.5.0! in /home/oq5ayjaeetjt/public_html/wp-content/plugins/elementor/modules/dev-tools/deprecation.php on line 304
 Trudeau on the International Stage: Implications for Cannabis Activists - Cannabis Digest
Skip to content

This past weekend, Victoria BC played host to a matched set of visitors: British Royals, Prince William and his partner, Kate Middleton; and Canadian Prime Minister Justin Trudeau accompanied by partner, Sophie Gregoire. The intense ceremony that surrounded this event reminds us that, for citizens of a classless society, at least in principle, we Canadians harbour a bizarre devotion to social rank. Otherwise, why the elaborate efforts by the City and Province to house, feed, and entertain the guests? And why all the media descriptions of the spouses, and the children, and the couples’ expected compatibility? (Apparently, they’d yet to meet.) 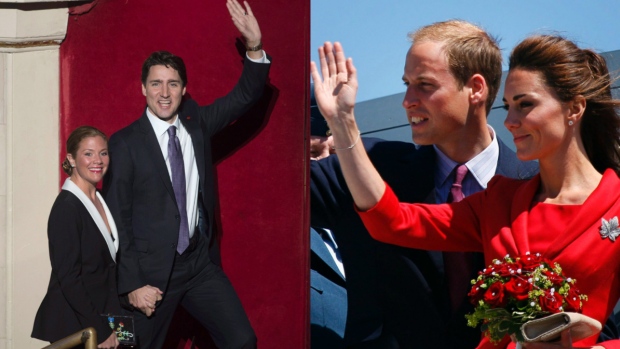 Whatever the sentiment, it has to be said, there is more to this event than pomp, or rank. The royal visit serves, more importantly as an occasion for Trudeau’s rehearsal of his version of Canadian identity. That identity is traditional, as in ‘promenading with royalty;’ but independent and forward looking, as in, ‘legalizing cannabis.’ It is also dynamic, and young and handsome, if a national identity can have such qualities. Some Victorians will have flocked to see the visitors, others will have walked the other way, and still others probably tried to ignore them. But however experienced, this weekend’s visit was less a show of class, in my view, than an invitation to consider Trudeau’s vision of Canada at this special, post imperial stage of history.

Cannabis activists are familiar with Jack Herer’s argument, that lumber and oil barons played an important role in the early suppression of cannabis in North America, and elsewhere. Similarly, we recognize the anti-cannabis, economic tug exerted today by pharmaceutical companies, alcohol producers and, in some places, prison unions. In British Columbia, if not in the rest of the country, we recognize the anti-dispensary, LP lobby as a bid to own the industry, or at least to control it solidly. Such are the economic roots of prohibition, in a money mad world. But wealth does not act alone. It needs the help of governments, and political leaders. And leaders have agendas of their own. Consider, for example, the agenda of William Lyon Mackenzie King, the federal Liberal leader whose 40-year political career ran from 1908 to 1948. King is famous for having crafted the anti-Asian, anti-opium laws of 1909, and of representing them at the International Opium Commission in Shanghai, that same year. He is famous, too, for having added cannabis to the schedule of controlled drugs in Canada in 1923, a decade and a half ahead of federal prohibition in the US, in 1937. These policies had little to do with money, but much to do with King’s exercise in nation building.

Until the passing of the Statute of Westminster in 1931, Canada remained a creature of the British Empire. The Statute granted Canada independence in managing its international affairs. King, who had by 1923 had become Prime Minister, was a force for Canadian sovereignty. He had plenty of materials with which to work. Older Empires, then in clear decline, were easy to show up as corrupt, and hypocritical. They had, for example, pushed the planting of ‘narcotics’ in their colonies. The Netherlands had fostered the planting of coca, and Britain, the planting of opium poppies.

This contorted past set the stage for ex-colonies to present themselves as examples of the newer, cleaner, morally advanced society. In this game, Americans, the new rising ex-colonial stars, had already taken the lead. What better way for King to establish distance from Britain than to sidle up to them? Two years ahead of the 1925 Geneva Convention, the first to mention “Indian Hemp,” King seized the moral initiative; he took the extraordinary step of adding it to Canada’s restricted list without, it seems, explaining this move to anyone. He would have been influenced as well by anti ‘marijuana’ hysteria in the writings of Canadian magistrate, Emily Murphy. But Murphy took her lead from the Americans too. Her stories were derived entirely from US police reports.

Today, Canada remains a signatory to three major international drug conventions: the 1961 Single Convention on Drugs (amended in 1971); the 1971 Convention on Psychotropic Substances; and the 1988 UN Convention Against Illicit Traffic in Narcotics and Psychotropic Substances. All three are relics of prohibition; all are still heavily US dominated. In announcing his government’s intention to legalize and regulate cannabis, Trudeau has chosen to walk away from this structure, and toward some form of liberal pragmatism. Over the past months, this intention has struck cannabis activists as weak, as arrests continue, and all efforts to reason with this government on the subject have failed. But when seen from the international perspective, regardless of process, legalization remains a bold move; a move destined to seize the international stage.

It seems significant that when, last April, the Minister of Health unveiled the time frame for legalizing cannabis, she did so first at the 2016 United Nations Special Assembly on drugs, in New York. Like King before him, Trudeau chooses to play to the globe. The allegiances have changed; cannabis legalization is a bid for independence from the UN, and a move away from American drug policy. The moral props have changed too. Old style critiques of corruption in empires have given way to charges of clumsy ineffectiveness in the current drug laws. To the old guard—Japan, Russia, or Indonesia, not to speak of the DEA—Trudeau’s most powerful response, should he find himself censured, is his stated intention to keep cannabis away from Canadian youth; something that prohibition has clearly failed to do. To secure his position Trudeau plans, I think, to dazzle the world with the safest, most secure, most controlled, and most child friendly, legal cannabis plan ever imagined.

For that project, I’m guessing, he would picture no better model than Canada’s Licensed Producers: super securitized, super sanitized, and big. For distribution, if I’ve got him right, Trudeau’s favoured options would be pharmacies for medical cannabis, and liquor stores for elective use. Their lobbies have already made bids based on their claim to superior standards of control; liquor stores claim the best skills in checking ID. Of course the provinces will have much to say on distribution.

To be sure, the plan to protect youth with an ironbound market is silly. Even if we grant the superior ID-checking skills of liquor store employees, it has to be said that young people obtain liquor every day. Do we blame the liquor supply chain for this fact? No. Under age users do not get their booze from shops. They get it from older friends. Nineteen year-olds, who identify more with 17 year-olds than with people in their twenties and thirties, are inclined to share their beer with their younger buddies, who, in turn, offer it to still younger people. Or the teens get alcohol at home, from parents who practice their own form of harm reduction. The same conditions will obtain for youth access to cannabis. It is unrealistic, then, to imagine that the security provided by LPs, liquor shops, or any other shops, would alter youth consumption. But to a broadly international audience, Trudeau’s promise of world-class security for kids might be persuasive. Indeed, in some Canadian conservative enclaves, it works pretty well too. 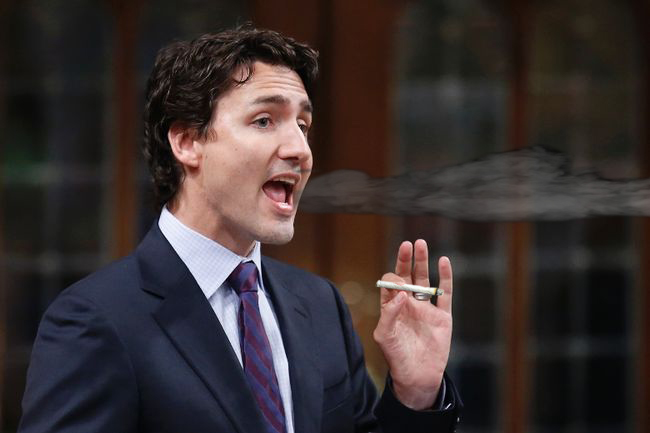 This attitude affects life in the cannabis community. It is increasingly obvious to BC activists that that feds are choosing to ignore their cannabis industry. Health Canada has condemned dispensaries, labs that provide testing for dispensaries, and indirectly, the unlicensed growers and producers that supply them. This is a cold war style response, and is central, l have been arguing, to an internationally oriented, Canadian identity-building strategy. When Trudeau says that Canada is not interested in fostering a ‘boutique industry,’ he is not talking to pro-cannabis Canadians. He’s peddling his super-Canadian, ultra secure model to the world: Trudeau’s version of CANADA THE SAFE AND SOUND, not so far off from Mackenzie King’s ‘Canada the Civilized.’ Constitutional issues notwithstanding, thus, I do not imagine that the regulation scheme to be revealed in 2017 will include personal, recreational gardens. If I’ve judged his inclinations correctly, Trudeau will argue that this kind of freedom will leave Canada with no way to limit youth access. Health Canada will add to the mix, of course, whatever ‘science’ it can amass to demonstrate that, for the young, cannabis is uniquely bad.

That’s not good news for 2017, but it is a clear signal that the BC Independent Cannabis Association is on the right track in approaching both municipal governments and the Province. Like the feds, these governments, too, have agendas. Happily, their agendas dovetail much better with the needs of cannabis activists. What better legacy for a BC Premier than to help foster a world class, tourist friendly, locally bred, cannabis industry? And what better way for city governments to appear progressive than to adopt public health oriented, pragmatic approaches to dispensaries? Now to keep this activism up long enough for BC Bud to become Too Amazing to Fail.

I was raised in some of the most socially and politically conservative parts of Canada. As a child and young adult, I was well educated in the harms associated with illicit drug use. I had no reason to believe that those lessons were based on bad information. I kept my distance from drugs and had […]

A Rastafari Perspective By Ras Kahleb “The reform measures approved by Cabinet have been primarily driven by the human rights and constitutional considerations prevailing in the Jamaican environment” ~ Mark Golding These were the words of Jamaica’s Minister of Justice, Mark Golding, during his address to the Jamaican people in regards to amendments being made […]

Cannabis and the Problems of Modernity: Thoughts on fragmentation in Cannabis Culture By Judith Stamps 1. Under the Best Circumstances, Communication is Difficult. If you had lived in a pre-20th century rural community, or small town, you, your spouse, your friends, and your workmates would have shared a history, and a common culture.  You would […]