This year marks 18 years of gathering at City Hall in Victoria B.C. on April 20 to smoke copious amounts of cannabis.  With an expected crowd of 2,000, it is one of the largest annual protests held in the provincial capital.  Many wonder how it got so big.

The beginning of meeting at 4:20 pm to smoke cannabis goes back to 1971 at San Rafael High School.  That fall a small group of high school kids decided they would meet when detention was over at 4:15 to go looking for some plants rumored to be growing nearby.  After a few unsuccessful attempts, one of the crew pulled out a joint at the Louis Pasteur statue they choose as their meeting spot.

At some point 420 grew beyond the one high school.  Grateful Dead fans in particular used it as a code for smoking herb.  When I came to Vancouver and joined Hempology 101 in early 1995 the group was itching to hold a rally in the spring.  Under the leadership of Hemp BC manager, Danna Rosek,  April 20 was picked as the date for that event.  I was the master of ceremonies.  Keynote speakers included Marc Emery and Rev. Leroy Campbell, with several bands playing music for us in Victory Square, right across the street from Hemp BC. 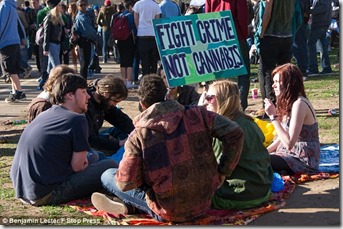 When I moved to Victoria, Ian Hunter from the Sacred Herb was already organizing weekly 420 meetings, first downtown and then in Beacon Hill Park.  In the spring of 1996, an event was held on April 20 in Beacon Hill.  Unfortunately the police soon after broke up the weekly 420 meetings.  In 1997 we only held a very small April 20 event with no advertising so the police would not bug us..

That changed in 1998, when a small group of about 50 young cannabis lovers decided it was time to make a stand.  At 4:20 we gathered in a circle on the front lawn of City Hall on Douglas Street.  Big joints were pulled out and smoked without a cop in sight.  This during a time where there was almost constantly a police officer in Centennial Square.

The next year the group was much bigger and once again no police even drove by City Hall.  It is unclear to me when the event got large enough for me to try and speak for a few minutes just before and after 4:20 pm.  It is also uncertain when we began having a costume contest, giving out bongs from local headshops to the best costumes.

In many ways, the April 20 event in Victoria is much different that the one in Vancouver, which is unique in the world.  We have never had a permit, which demands a lot of insurance and other expensive requirements, so there has never been power for bands nor the ability to bring in large food booths and other vendors.  A few small vendors have popped up selling fruit, pipes and other goodies but these are generally pretty small and not connected to a business. 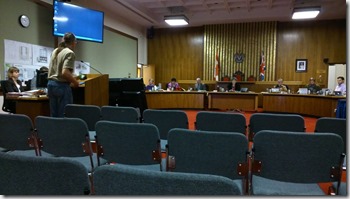 City council has spoken with me about 420 on a few occasions when I made my annual speech for International Medical Marijuana Day.  There was a concern about how many young kids seemed to be skipping school so they could hang out all day in the square.  While I would prefer the youth spent the day in school myself, the fact is so many high school kids take off the day that Vic High and the Vancouver School District have given students April 20 off, as it made little sense to have the school open with so few students in attendance.  All I could promise the council was that I would be there to make sure there was no trouble among the youth or with the old drunks that generally live in the square.  Since the police generally avoid the area for the day, it is better that they all gather where I can keep an eye on them and try to make sure they are not drinking alcohol, too.

There have been a couple of a times when we have actually had to call emergency services to 420.  A few years ago a young girl jumped off a ledge, fell and hit her head on the cement wall, knocking herself out.  The following year a young guy got a head rush and fell back, hitting his head on the cement fountains.   Then last year, in the stupid stunt of the year, some kid lit a palm tree on fire, which I was almost able to put out with my bare hands but not quite.  The fire department and police came to make sure the fire in the tree was put out.  Luckily it happened after 4:20 pm and most of the crowd had already left.

Though it is on a Monday, there is no doubt that this year will be as large if not bigger than last year.  For the past few years it has seemed like the numbers grew from about 1,600 to 1,700 in 2012, to approaching 2,000 last year.  As each year passes, more and more people are making celebrating 420 a tradition, helping crowds swell around the world as people lose their fear of being seen smoking the herb in public.