After I finished high school there were just a few social groups that I remained in contact with: there were my soccer buddies and my weed smoking friends, two groups that overlapped.  Part of this overlapping group were some of my closest friends.  After a day of smoking cannabis and running around kicking and juggling soccer balls for hours on end, we would return to one of our friends basements to play soccer video games and smoke more weed.

One night while our thumbs twiddled manically in this stereotypical stoner setting, we struck upon an idea.  After naming all of the players in our video game after our friends we thought the next logical step should be starting our own soccer team made up of all our friends. Light bulbs turned on. Our new team would be dubbed “The Blazers” because blazing was one of the common term we use for smoking cannabis and also an inconspicuous term for those parents/fans who weren’t ‘in the know’.

We started an offshoot business called Blazing Earth Works and sold our labour for various gardening and landscaping jobs to raise funds. We chose jobs that were suitable for an afternoon smoke break, no heavy machinery. We began recruiting friends and siblings who we knew would be excited by the idea of the soccer team who all smoked weed. We met regularly to juggle together, play passing games and run about after a thorough smoke session. 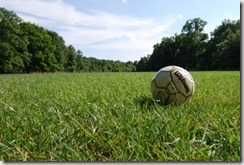 It just so happened that we were really good.  According with the Vancouver Island Soccer League rules, we launched our team into division six, the lowest of the men’s leagues. We finished first and were promoted. The added social experience together that we had while smoking cannabis contributed to team cohesion and good attendance to practices. The following year we finished first again and were promoted from the fifth to the fourth division.  Perhaps our highest point was defeating a top level team in a cup match at their home stadium and then hot boxing their changing rooms.

It is a solemn fact that sports incur injuries and I saw some of my friends fall victim to serious permanent physical damage. As I entered my twenties it became apparent how many players on my team or others were wearing knee or ankle braces. This was all the incentive I needed to stop playing competitive level sports. My injured friends were restricted to video games in their respective basements/bedrooms where their cannabis use served medicinal purposes on top of the enjoyment that was customary.

I soon left Victoria and The Blazers behind in search of deeper purpose in my life, but I remember fondly the bonds that were forged by this small group of soccer-loving cannabis-smoking friends. After traveling British Columbia with my backpack for a few years I returned to Victoria and soon became a cannabis baker at the V-CBC. When I was arrested in 2009 I was left to sit for 8 hours in the Victoria police interrogation room. I had recently lost my wallet and all of my identification with it. The officers believed that I might be concealing my identity and began asking series after series of questions to determine if I was indeed who I said I was. 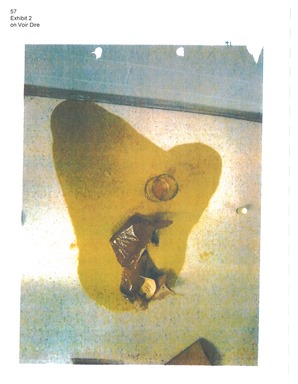 By a stroke of luck, unbeknownst to me, one of the former blazers had since become a Victoria police officer. He happened to stroll by the interrogation room and decided to take a peek inside. Recognizing me he confirmed my identity and entering the cell said, “Hello Owen, I wouldn’t expect to see you in here”. This officer was later involved with moving all of the infused oils that were seized from the bakery into the evidence locker. They dropped one jar that broke on the concrete floor. The smell must have been overpowering and the liquid lecithin that was stirred into the oils is terribly difficult to clean up.

The blazers finished fourth in division 2 in 2012 before disbanding, the team had slowly moved from a pioneer weed smoking franchise to a run-of-the-mill beer drinking boys club. The clubhouse had been damaged during keg powered dance parties and one team member tragically died after a night of heavy drinking. The rise and fall of the blazers offers an example of how the bond formed among cannabis users can be utilized to enhance other areas of our lives. We were bold and took risks that other teams in the country would never have dared. As prohibition is repealed and cannabis using people feel safe to come out of their basements, we will see the stereotype of a pot smoker as the lazy loner replaced by the cannabis user as a successful team player.

For those who live in Victoria, BC, Hempology 101 organizes Team 420 events that harness the co-operative spirit of healthy and happy cannabis users. Stay tuned to the Cannabis Digest Blog for upcoming events.

A Personal Interview with Ted Smith

Cannabis Digest publisher Ted Smith has accomplished a great deal as a cannabis advocate: from founding the Victoria Cannabis Buyers Club, to hosting the largest student club at the University of Victoria, to runnning 4K in a 10 ft. tall pot leaf costume in under an hour. He has led numerous legal challenges against bad […]