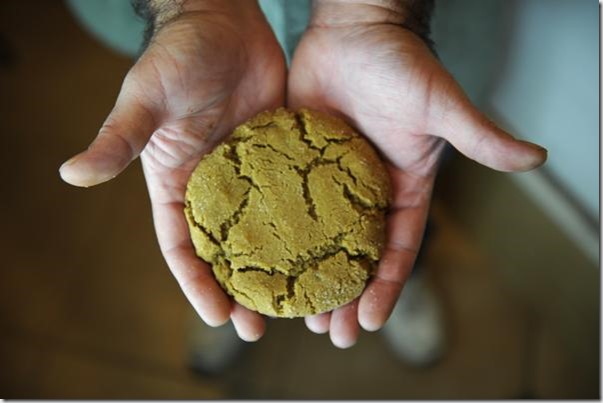 I began my foray into the role of a medical cannabis caregiver at the bakery of the Victoria Cannabis Buyers Club in 2008. Previous baking experience and a keen interest in learning about the cannabis plant as medicine made me an ideal candidate. Although I took a pay cut, i learned a great deal over the next year until I was arrested late 2009. The response to the arrest was a constitutional trial that made cannabis extracts legal for patients in BC in 2012. This decision was recently upheld by the BC Court of Appeal so that patients in the other provinces may now separate the dried plant material from the medicinal ingredients held in bulbs at the end of tiny hairs on the plants surface.

For those patients now exempt from the extract restriction, I designed a video tutorial to explain the simple steps we use to decarboxylate and extract the dried cannabis into vegetable oils to make a variety of products. This accompanies the dispensaries’ recipe book which only covers the basics of simple extraction, an art which has grown into a modern science in places where extract producers have been legally permitted to work. The recipes and methods continue to be revised and can be viewed at the V-CBC website.

Decarboxylation is the act of heating the plant material carefully to activate the THC from its dormant acid form. This process happens naturally as the plant matter dries, but through a series of tests, we determined that heating at approximately 300 degrees fahrenheit for 30 minutes can transform close to 98 percent of the inactive cannabinoids. Chemically, this process removes CO2 from the THC molecule, making it available to the cannabinoid receptors. The chart shows the results of decarboxylation over three tests with an infused grapeseed oil. The left column measures how many milligrams of ^9 THC are found in a single ‘Ryanol’ capsule, while the bottom bar shows the temperatures used for the three testing sessions. 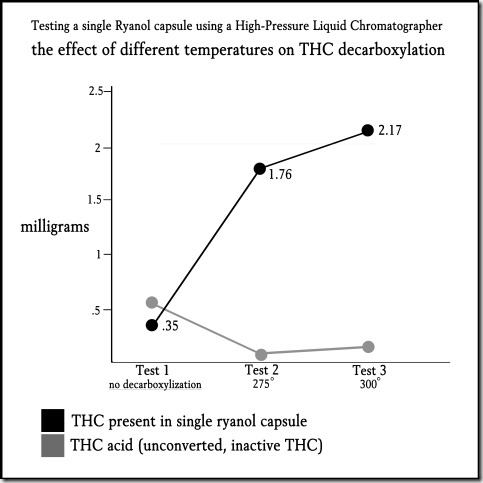 For the first test, we used a double-boiler to cook the leaf into the grape seed oil for five to six hours, which is the technique we had used for over 10 years. The second test involved heating the leaf for 30 minutes at 275 degrees before double boiling the leaf. For the third test, we increased the temperature to 300 degrees for 30 minutes before adding it to the oil. As the Chart shows, the third and final test has maximized the conversion of THC acid to active ^9 THC; increasing the temperature any more could risk combustion or the break down of some of the cannabinoids. The decarboxylation process can be performed before the creation of any medicinal cannabis product to maximize the presence of active medicinal ingredients.

What About the Children?

Cannabis being used successfully to treat a myriad of ailments in kids When it comes to cannabis prohibition, you’ll often hear the words, “What about the children?” I ask, yes, what about the children? If the research was done, would children benefit? Would they be restricted to pharmaceutical mediations, or would they also be allowed […]

Cannabis plants have been cultivated since before anyone can remember; yet the skills and love for the art are only now set to be reintroduced to the public. With many ‘Reefer Madness’ myths being busted and banished, the ancient love and art of growing cannabis will soon be accessible to every adult in Canada.  The […]