On a cold December morning, 4 years after my arrest, I attended the BC Court of Appeal to witness the oral arguments of the two crown prosecutors and my lawyer, Kirk Tousaw, in front of three BC Appeal Court Judges.

Just two days earlier, we received a Memorandum from the Appeal Court Judges. Surprisingly, after four years of appearances and conferences, and two trials, the Memorandum requested that we discuss “Standing”: that is, whether or not I have the right to raise the constitutional argument at all.  It said:

“Specifically, the division wishes counsel to address the question of how Mr. Smith’s admitted trafficking in marihuana, when he has no authorization to do so in any form under the Marihuana Medical Access Regulations, raises any question of the constitutionality of the restriction in those regulations on the form of marihuana distributed.”

As I am not seriously ill, I do not have a license to possess; as I am not a cannabis grower, I do not have a license to grow for a patient. Under the medical marihuana regulations there is no license to make cannabis infused vegetable oils to bake cookies, make lozenges, or fill gel capsules. I considered it my duty to help fill this void by providing edible products to people in bona fide medical need. Besides clubs like the Victoria Cannabis Buyers Club, there still is no secure way for critically ill people to obtain edible cannabis products that have been refined for quality control. 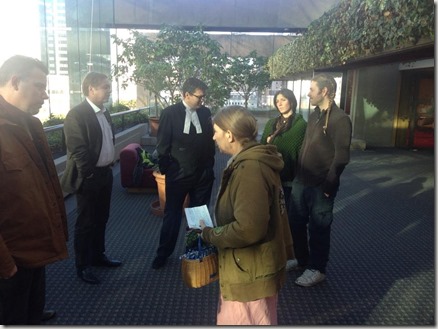 (A small crown gathered outside the BC Court of Appeal)

Before the hearing, my partner Coco and I had breakfast with Kirk and Ian Mulgrew, veteran columnist for the Vancouver Sun. Ian warned us that this experience would be excruciatingly boring and that the court of appeal likes to ‘punt’, avoiding any opportunity to make a final decision. The single row of seats at the back of courtroom was full. The three judges entered together, casting stern straight looks at the audience.

They began the day by addressing the “Standing” issue raised in their memorandum. They asked the Crown if I had the right to make the challenge, to which the crown prosecutor responded that there was a lot of precedent established that I did. Kirk agreed that the Supreme Court of Canada ruled in 1988 that no one can be convicted under a law that is unconstitutional even if their rights are not infringed.

When asked why I had not been been prosecuted like any other drug trafficker, they stated the position that “after studying the reasons and assessing its case, the Crown concluded that the constitutional ruling significantly impacted on the Crown’s ability to present its case to the jury”. The Crown repeated this point a number of times, even paraphrasing what I would have said on the stand in the jury trial.

They were sure that the jury would be made aware of the Judges’ constitutional ruling and would be obliged to decide in accordance with it. These arguments raised the question of how much impact the decision in the “Voir Dire” actually has on unlicensed extract producers who clandestinely operate compassionate kitchens for sick people across the country.

Although most of the morning felt like I was watching Boba Fett brood over the chance to offer another carbonite statue to Jabba the Hut, Kirk Tousaw offered brief but decisive flashes of reason. At the break, Ian Mulgrew gave his straight impression. “You’re busted” he said, seeing the Judges’ focus on the issue of Standing to be an avenue the court may seek to use to dismiss the case altogether.

stay tuned for more in this series on The Extract Trial