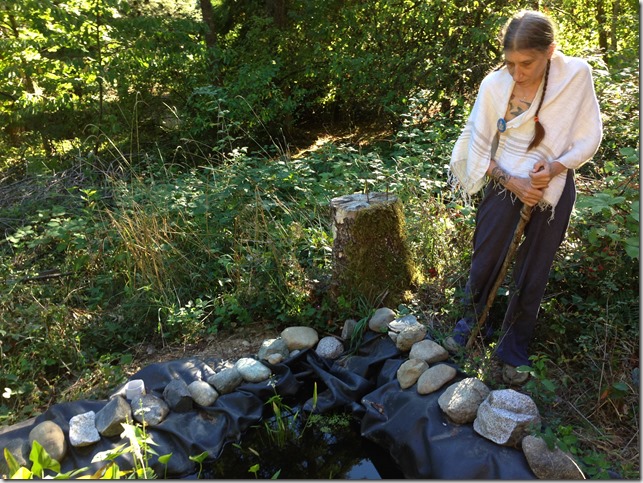 (Gayle in her backyard overlooking her pond)

I owe my introduction to preparing cannabis medicines to one woman, Gayle Quin.  Years before I began my work as a cannabis baker at the local dispensary, I met Gayle at a series of Hempology101 student club meetings at my college. Gayle is the life partner of Ted Smith, founder of the Victoria Cannabis Buyers Club. Over the course of a decade, Gayle assisted the V-CBC in expanding their edible and topical cannabis product line. Most of the recipes that I have previously shared with readers originate with Gayle Quin.

As I write this, I am visiting Gayle at her home where she is bedridden from bone cancer.  She has access to the most up to date, in my opinion, forms of cannabis extract including high CBD varieties processed through a CO2 extractor into tiny capsules. Gayle has a long history of medical conditions for which the use of cannabis and other herbs have played an essential role. She was one of four women who testified before the BC Supreme Court judge in 2012.

At a young age she suffered from dysmenorrhea, a little understood condition at the time, that causes severe menstrual cramps. She used medical cannabis to successfully treat this condition and bore two healthy sons.  She was then diagnosed with hepatitis C which destroyed her appetite and made it difficult to sleep. After several surgeries were unsuccessful and her doctors had exhausted their options, she sought help from a local naturopath. She changed her diet and began eating lots of cannabis, 11 years later the Hepatitis C had disappeared.

Due to mercury poisoning, Gayle suffers from an intolerance to chemical products including many traditional medications. After the Hepatitis C treatments she became so chemically sensitive that she had to remove all of the plastic from her home and found it difficult to go out where someone’s deodorant or perfume would make it hard for her to breath. While confined to her home she developed her knowledge of herbs, kinestheology, acupressure, reflexology, and massage.

By using a combination of alternative treatments, she was eventually able to return to a normal life and soon began to protest the cannabis laws. Ted Smith and Gayle Quin united to fight prohibition but were destined to become much closer. When she began working at the Victoria Cannabis Buyers Club, not only did she improve the baking and expand the product line but Gayle provided valuable health tips to members who she spent a lot of her time speaking with.

Gayle insisted that all of the ingredients used in the club’s medicinal products be sourced organically and locally where possible. She replaced the white flour with a healthier whole wheat blend. She taught me how to make Ghee, which involves clarifying butter of moisture and non-fat milk solids. She introduced Lecithin to the infused oils to aid the body’s use of the oil-soluble cannabinoids by emulsifying them into a form we can use.

Gayle defeated breast cancer soon after she testified in the BC Supreme Court in 2012. However the cancer returned and spread to her bones. Recently her condition deteriorated, finding her in hospital; but today she is dancing in her bed: the cheerful, loving woman who began my journey to help people access medicinal cannabis extracts.

By Ted Smith Everyone in the cannabis industry fears it will be taken over by large corporations now that the federal government has committed to legalizing cannabis.  Since the Liberals have not introduced a detailed plan, there is a legitimate concern that lobby efforts from large companies will pressure the government into creating tight rules […]