Deprecated: The $control_id argument is deprecated since version 3.5.0! in /home/oq5ayjaeetjt/public_html/wp-content/plugins/elementor/modules/dev-tools/deprecation.php on line 304
 Health Canada VS Cannabis Digest - Cannabis Digest
Skip to content

The war of words just got a little more interesting.  One day before calling a federal election, Health Canada announced that a renewed effort will be taken to stop illegal dispensaries and websites from advertising.  This puts the Cannabis Digest newspaper square in the forefront of another legal battle with the federal government.

Of course, Rona Ambrose, the minister responsible for Health Canada, is keen to do anything possible to curb the proliferation of dispensaries across the country.  “The law is quite clear that dispensaries, whether they are online or a store-front, are illegal and they should not be allowed to advertise these illegal services. I have directed Health Canada to take a more proactive approach to compliance in order to protect the health and safety of Canadians.”

It is hard to believe this announcement will have much effect, as it seems absurd the government would issue a statement that advertising the sale of an illegal product will be targeted when it is clear Health Canada can do little to stop the illegal activity that is the root of their ideological fight.  Since Health Canada seems incapable of stopping cities like Vancouver and Victoria from creating bylaws to regulate dispensaries, this appears to be the best can do to fight the growing number of storefront and on-line cannabis distributors.  However it appears these threats have not stopped either print newspapers from printing ads or brought down any web sites.

This is not exactly news, as Health Canada has already made it clear advertising for a dispensary is illegal.  In June they sent a letter to a Vancouver radio station warning it that selling ads to dispensaries was illegal.  It appears to have worked, so now they are targeting other media companies.

“To date, Health Canada’s activities around illegal marijuana advertising by non-regulated parties have been primarily complaint based. Under the new approach, the department will be more proactive in identifying and addressing cases of illegal advertising. In addition to more traditional advertising in print, radio and television, Health Canada will monitor web sites for various businesses, including dispensaries, to identify any advertising that may be taking place.”

This places the Cannabis Digest squarely in defiance of the law, creating a possible showdown between the publication and the federal government.  With several dispensaries advertising and more apparently interested, the Cannabis Digest would not even exist without the support of the Victoria Cannabis Buyers Club.  While other publications may scare easy if the government threatens them, our newspaper will stand and fight against these laws to the Supreme Court of Canada if necessary.

Of course, the Licensed Producers, who are greatly restricted in the types of advertising they can do, are cheering Health Canada on with this renewed effort to attack dispensaries.  Though many LPs will admit they desire storefront cannabis pharmacies to provide the medicine, most hope the federal government can shut down the existing dispensaries so they can move in later. 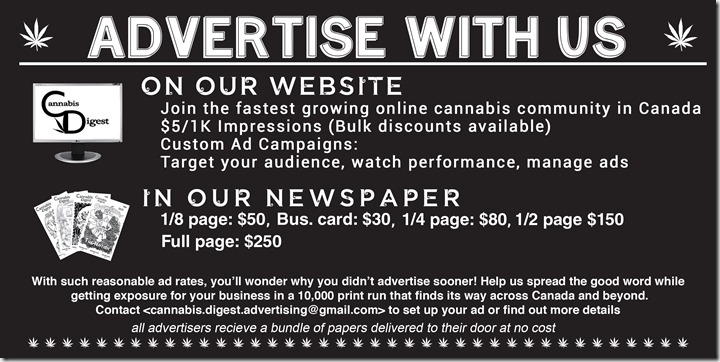