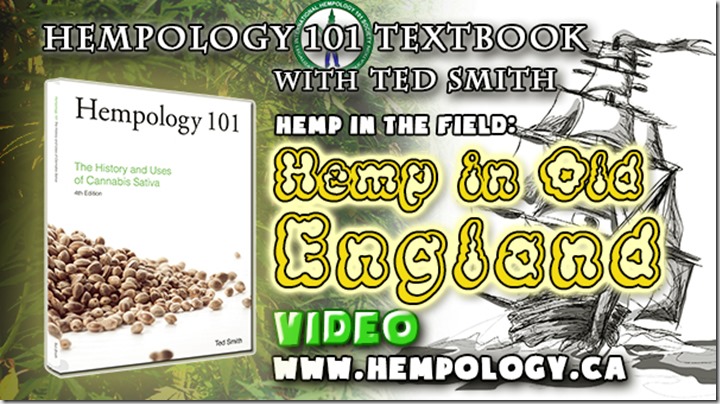 Relying upon sailboats to expand trade and conquer territories meant the English had to gain access to large amounts of hemp rope and canvas.  Since being raided by the Romans, canvas sails made from hemp and hemp rope became very important for their navy and commercial fleets.  While most of this hemp came from mainland Europe and eventually the USA, there is some evidence to suggest that it was grown in the UK, despite the poor weather and soil.

Several clues exist that suggest hemp was grown in ancient Britain.  The most convincing is lake sediment samples that show cannabis pollen existed in the air centuries ago.  Combined with parish and government records indicating hemp was one of the crops grown in the Middle Ages, there should be little doubt it was used for fiber and seed.  However, given the climate of Britain the cannabis grown would have little THC, giving it virtually no noticeable psychoactive effects.

With names of existing towns like Hemphill and Hempriggs, and many old places on maps with names such as Hemp-buttis, Hempisfield and Hempriggis, it is clear that hemp was an important sector in the local economy at certain time periods.  When America was first settled, some invaders noted that the hemp grew twice as large in the conquered territory that it did back in England.  The English crown even let settlers pay their taxes in hemp that was shipped back home to be processed before being sent back to help fight for more land.

For more of the fascinating history of the hemp plant, please subscribe to our Hempology 101 Youtube channel, where we are making a series of videos to break down the information contained in my book HEMPOLOGY 101: THE HISTORY AND USES OF CANNABIS SATIVA.