Deprecated: The $control_id argument is deprecated since version 3.5.0! in /home/oq5ayjaeetjt/public_html/wp-content/plugins/elementor/modules/dev-tools/deprecation.php on line 304
 Into the Breach, Part 1 - Cannabis Digest
Skip to content 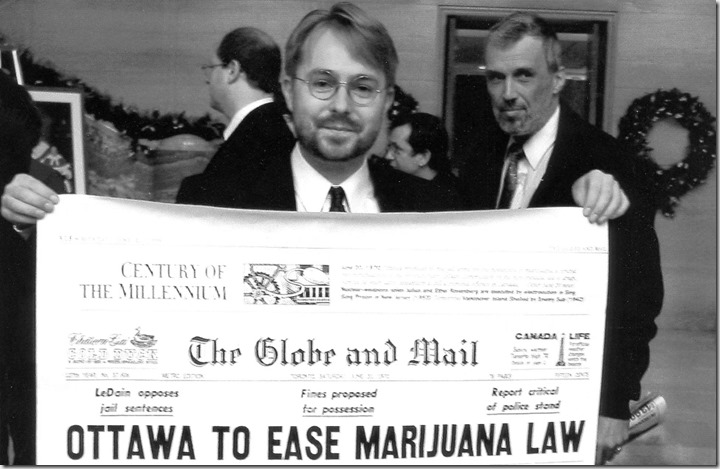 “Once more unto the breach, dear friends, once more.” – William Shakespeare

I never even entertained the thought of failure, but there it was – with the Supreme Court ruling, the last, best hope for ending cannabis prohibition in decades had collapsed, and I was spent.

It’s now twenty years since I was arrested for selling cannabis and, to my surprise and joy, I’m selling it again.  There are huge cracks in the walls of prohibition, and I’m heading into the breach to help with the final push.

My story begins with the Great Canadian Hemporium which, ultimately, grew out of my own fears and experiments surrounding pot.  In 1992, at age 21, I spent a summer in P.E.I. studying photography as part of an intensive, 12-week program administered by Ryerson University.  Sixteen of us were selected to live in cabins by the ocean, shooting photos using old-fashioned 4×5 cameras while taking advantage of modern, on-site darkrooms.  Soon after we arrived, pot began arriving by courier as one of the students introduced the rest of us to the wonders of cannabis.  Combined with the school’s impressive film selection (featuring consciousness-raising documentaries like Koyaanisqatsi and Manufacturing Consent) my worldview transformed during a single season and I entered my second year of studies in Toronto questioning everything. 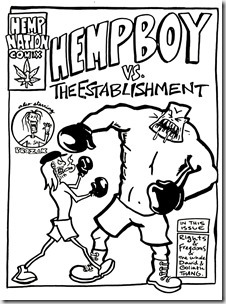 My second year at Ryerson was much less intensive, so I spent increasing amounts of time in libraries to see what I could find out about marijuana.  Although I had thoroughly enjoyed my summer awakening, in the back of my mind I was concerned that I may have caused some serious damage to my mind and body.  Over the years, I had heard all kinds of scare stories related to cannabis use including immune system suppression, cancer risks, infertility, and chromosome abnormalities.  In particular, Dr. Gabriel Nahas, Nancy Reagan’s “Just Say No” scientist, had published hundreds of now-discredited articles in scientific journals, making outrageous claims about marijuana that resulted in ominous newspaper headlines around the world.

I quickly discovered a vast amount of research on cannabis that suggested it not only was relatively harmless, but that it had a number of medicinal properties.  Indeed, it confirmed what I had suspected, since I found it very helpful with my ADHD.  I was especially impressed by the findings of the “Le Dain Commission of Inquiry into the Non-Medical Use of Drugs” when I stumbled upon its final report in the school library.

Around the time of my birth, a Canadian royal commission had spent 3 years and $3.5 million, exhaustively examining cannabis prohibition.  The report concluded that “the costs to a significant number of individuals, the majority of whom are young people, and to society generally, of a policy of prohibition of simple possession are not justified by the potential for harm of cannabis and the additional influence which such a policy is likely to have upon perception of harm, demand and availability.  We, therefore, recommend the repeal of the prohibition against the simple possession of cannabis.” One of the commissioners, criminologist Marie-Andree Bertrand, went even further – in a minority view, she wrote that prohibition is “expensive and ineffective,” and recommended that the federal government “immediately initiate discussions with the provincial governments to have the sale and use of cannabis placed under controls similar to those governing the sale and use of alcohol.” 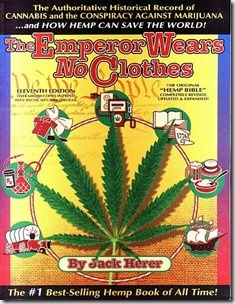 I’m somewhat obsessive by nature, and as my anger grew at the injustices of prohibition, I began copying and filing the information I was gathering.  By the following spring, I had already filled a small filing cabinet full of studies and was getting more and more fired up.  I also bought a copy of Jack Herer’s classic book, The Emperor Wears No Clothes (which was then banned in Canada) from the Mystic Bookshop in London, Ontario.  Then, two things happened that sealed my fate.  First, a poster in downtown Toronto caught my eye… Featuring a Canadian flag with a pot leaf in the middle, it announced an upcoming “hemp fest” at a local pub.  Intrigued, I attended the event and an activist, Adrian Plant, handed me a photocopied list of suppliers for various cannabis-related products – hemp fabric, hemp seeds, books and more.  Soon afterwards, I caught a brief news clip on the radio that announced a new store in Texas called “Legal Marijuana: The Hemp Store.”  Before long, I was ordering my first products and as soon as school ended, I booked a booth at the Gibraltar Trade Centre in my hometown of London, Ontario.

“If you are the big tree, we are the small axe. Ready to cut you down, cut you down.” – Bob Marley

The flea market booth grew exponentially and, a month later, my booth at Lollapalooza was the busiest by far; it was time for a store.  On July 24, 1993, the Great Canadian Hemporium opened its doors.  Attracting national media attention the day after opening, the shop grew quickly.  At the time, industrial hemp, medicinal cannabis and recreational marijuana were all illegal, all lumped together under the same draconian laws, and my shop reflected this.  It carried a full range of cannabis-related products (many of which were technically illegal) and evolved to include a small cannabis history museum.

In 1994, I added viable seeds to our inventory.  Meanwhile, knowing I was continually pushing the boundaries, I met with Osgoode Hall law professor Alan Young and star Toronto lawyer Paul Burstein to discuss the possibility of a constitutional challenge if I was ever charged at some point… It turns out I wouldn’t have to wait long.

By early 1995, the next step seemed obvious.  To save growers the time and hassle of starting and sexing seedlings, I would sell clones, or cuttings.  Clone sales commenced on May 17, and four hours later I found myself in jail and the constitutional challenge was underway.

I was released on bail after the weekend, and was devastated to find that my entire store had been looted by police while I was behind bars.  Virtually everything was gone – even books and hemp clothing.  Undaunted, I rented a huge, 2,000 square foot location around the corner from the first shop, and within a few weeks was up and running again under the banner “Hemp Nation”. 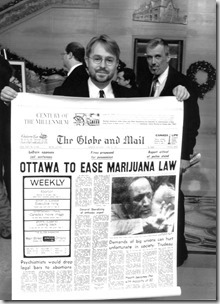 Over the next few years, I raised over $100,000 to fund the challenge by selling “Victory Bonds.”  Each cost $25 and will be redeemable for ¼ ounce of marijuana once prohibition ends.  Lawyers Paul and Alan donated countless hours of their time, as most of the funds were needed to fly in expert witnesses from across North America, including Harvard psychiatrist Dr. Lester Grinspoon; two Le Dain Commissioners, Dr. Heinz Lehmann and Marie-Andree Bertrand; SFU criminologist Neil Boyd; and many more.

After several weeks of hearings, Justice John McCart ruled that marijuana was relatively safe compared to alcohol and tobacco… but he did not believe that prohibition was unconstitutional.  We then lost in the Ontario Court of Appeal and, ultimately in the Supreme Court of Canada.

Considering that I was no longer even using cannabis, it seemed like a natural time to move on.  In my mid-twenties, I had developed anxiety and social anxiety disorder (both of which run in my family); THC made both conditions worse.  Meanwhile, the legal challenge was over and lobbying the Harper government for change was obviously pointless.  I retreated into a quiet life as a web developer, working from a home office and supporting environmental groups when I could.  I had donated websites to a number of non-profit societies over the years, but my years as an activist seemed over.

For ten years, I rarely smoked cannabis – as ever, I found it helped my ADHD, but without fail it worsened my anxiety.  I tried all manner of pharmaceuticals to manage anxiety, none of which worked without causing unacceptable side effects.  Meanwhile, I had less and less social contact with people who were outside of my small circle of friends and family. 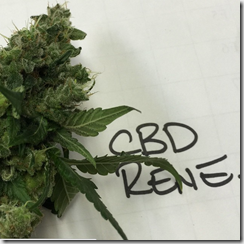 I was aware that some people found cannabis helpful with anxiety, so occasionally I would try a new variety in the hopes it would help.  Last fall, on a rare visit to the Vancouver Island Compassion Society (VICS) in Victoria, I noticed a strain on the board named CBD Rene.  It’s a cross between Rene and Cannatonic, developed in Vancouver Island’s Cowichan Valley by House of the Great Gardener.  Curious about CBD, I bought a small sample and knew immediately I was on to something.  The 1:1 ratio of THC:CBD felt nothing like any medication, cannabis or otherwise, I had used before, and it completely changed my life. A series of awakenings led me, ultimately, to abandon my career, venture out in the world again, and open another cannabis store.

By Owen Smith Kirk Tousaw is one of Canada’s top Cannabis lawyers. Born in the state of Michigan, Kirk has been an advocate for cannabis legalization since high school. He obtained a degree in Political Theory and Constitutional Democracy before moving to Vancouver in 2002. There he completed his Masters thesis on the “Malmo-Levine case” […]