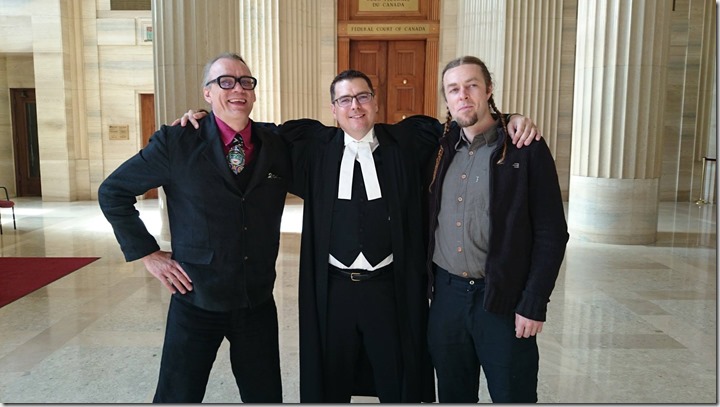 Last Friday March 20 was a dream come true for myself and many other cannabis activists.

Normally I would say you had to be there, but in this case there is actually a recording that will forever show the government dismally fail in its defense of the medical cannabis regulations.  Over the next while Owen Smith and I will be writing several blogs about this historic experience to help document what happened when the cameras were not rolling and to explain what happened with the judges.  It will help pass the time the next 3 to 5 months while we wait for the decision.

While we were waiting for the courtroom to open, news came to the lawyers that two judges would not be in attendance. This means that only the 7 judges that heard the case will make the decision and write the recommendations to the government. *Unfortunately I was told otherwise when I wrote this and hope this correction is read by everyone concerned. On a positive note, the two missing judges are considered by many to be the most conservative.

Visually, the defense lawyers and intervenors for the defense team dominated the courtroom floor.  With 4 rows of 11 lawyers on one side of the room and just two representing the government of Canada, if this was a case of David versus Goliath it looked the other way in court.  The fact that the crown lawyer was the same one from Vancouver that lost in the BC Court of Appeal showed how little effort Health Canada was putting into the hearing.

Before the judges entered the room some activists were taking pictures with their cameras, something normally strictly forbidden in courtrooms.  But is did not stop there.  Not only were a few pictures taken when court was in session, but when it was over it seemed everyone pulled out their cameras or started posing for shots of the historic day.  Though it was my first time in the SCC, I have no doubt that we had one of the biggest celebrations at the end in Canadian history and for good reason. 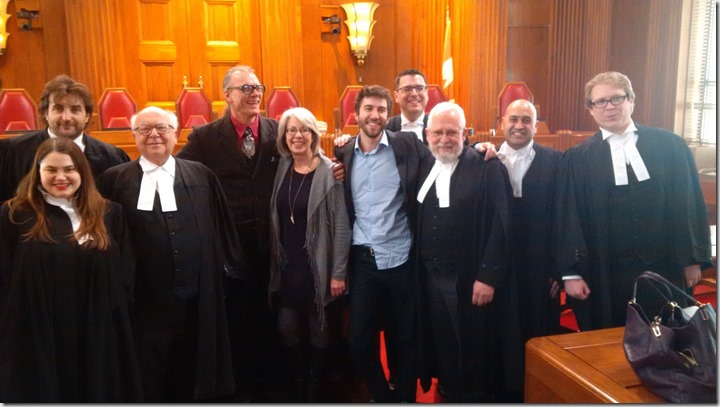 The room was packed full of people wanting to witness what was said.  An overflow room with a big screen quickly filled up, and when they erupted in noise they were moved to a bigger room farther away which was full by the end of the hearing.  The court sheriffs were wonderful, making sure as many people fit into the courtroom as possible.

In fact, the sheriffs were awesome.  Twice the room broke out in applause after the judges criticized the crown lawyer, despite several of us trying to keep everyone quiet.  A few people were even vaporizing and eating cookies while the proceedings were going on, without so much as a blink from the sheriffs.

Ultimately, it was the judges of the high court that were the highlight of this day.  From the beginning, they grilled the crown on his reason for the appeal.  Some could not help but make faces when he argued things like smoking is healthier than eating cannabis and that we should apply common sense instead of the law in certain circumstances.

In sharp contrast, the judges spent most of their time with Kirk discussing the potential remedies they might write into their decision.  While they took few notes when the crown spoke, they wrote furiously at certain times when Kirk was speaking, hopefully using his ideas to include in their decision.  They were listening intently to Kirk the entire time he spoke and did not seem to challenge his ideas as much as they were asking for clarification of certain points.

The energy in the courtroom was electric.  Truth and justice finally seem to be on our side.

At the end of the hearing the Chief Justice bluntly told the crown he needed to come up with a point that mattered if he expected the court to listen.  He did not say much more.  It was very clear that the judges were not impressed at how the government is managing the medical cannabis program.  Hopefully their decision will convey an equally strong, clear statement to Health Canada that will force them to make cannabis extracts legal for patients from now on.

As soon as the judges left the room, I could not help but lead a large cheer for the fine work of Kirk Tousaw.  Everyone tasted victory in the air, even the typically sceptical lawyers.

Owen Smith is a true champion of cannabis.  His glowing demeanor shone through the courthouse in radiant splendour as justice was served cannabis cookies.  It was truly a moment in history that many of us will remember forever.