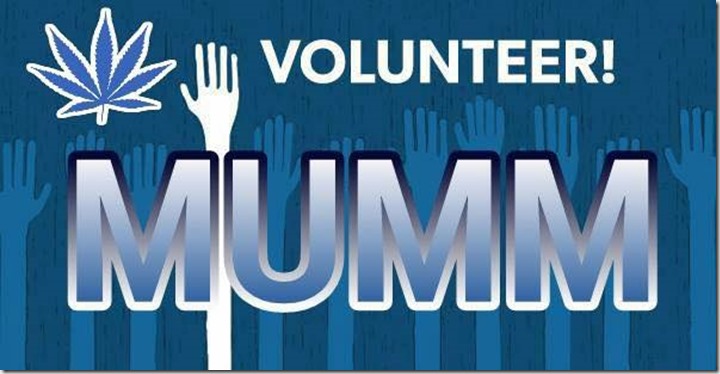 In March of this year, as reported in the Spring Issue of Cannabis Digest, Halifax City Police and the Integrated Street Crime Unit charged medical cannabis patient Bob Dillman and his wife, both from Dartmouth, with possession and production of cannabis. Dillman had fallen into a legal quagmire created by the Allard decision in federal court, British Columbia, and changes to the federal medical cannabis program that sought the elimination of home gardens for medical cannabis patients and their caregivers.

Dillman’s last federal exemption was dated February 2014. With the previous program winding down, he was unable to renew his paperwork through Health Canada before it expired, despite the fact that his doctor continued to sanction his medical use. Living on a limited, fixed income, Dillman was unable to afford cannabis from Licensed Producers. In fact, the cost of obtaining corporate cannabis would exceed his monthly income by $18.00. Even a financial guru couldn’t make that equation work!

On May 11th, Dillman received word that his wife’s charges had been dropped. The following morning, in Dartmouth Provincial Court, he learned that his charges would follow suit. Dillman said that after their names were called in court, the crown claimed that ‘evidence was an issue.’ Therefore all charges were withdrawn. Yet the RCMP had confiscated at least 18 plants and an undisclosed amount of cannabis the day of the raid.  Just days after they learned of their fate, Dillman and his spouse joined with Maritimers Unite for Medical Marijuana Society (MUMM) for a press conference at the High Life Social Lounge in Halifax. As a result of this press conference, Ray Bradbury, Global News, Halifax, extracted the following statement from the Public Prosecutor Service of Canada: “The charges were withdrawn in this matter because the public interest was no longer best served by prosecution.”

Increasingly frustrated by, and concerned over, the on-going arrest of patients who utilize cannabis for therapeutic purposes, MUMM kick-started a petition at Dillman Park (a.k.a. the Dartmouth Commons), Dartmouth, at the 20th annual Cannabis Day celebrations on July 1st. The petitioners are requesting that the province of Nova Scotia work with law enforcement and the Public Prosecution Service of Canada to ensure that the arrest and prosecution of chronically ill Nova Scotians be stopped immediately. Our executive is also awaiting an appointment to discuss our concerns and suggest alternatives to arresting patients with the province’s recently appointed Provincial Justice Minister, Diana Whalen.

Sadly, another patient and spouse were arrested and charged under the CDSA on August 5th. In March of this year, Rob Roy and his spouse, who fall into the same grey area as Dillman, were raided, and are now set to appear for finger printing and mug shots on October 5th at the Kingston RCMP detachment, and later that same morning at the Annapolis Royal Courthouse. MUMM and Halifax Anonymous Hemp Sector will be on hand to offer support, and will be holding a rally outside at both the RCMP detachment and the courthouse, which, by the way, is the oldest court in Canada. 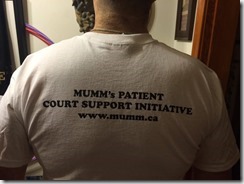 James MacDonald, featured in a CD spring article on patients in Nova Scotia who have been prosecuted, was sentenced to 60 days by Justice Del Atwood at the Pictou Provincial Court on January 8th 2015.  He was convicted of marijuana production. Caught in a void between Health Canada medical marijuana exemption approvals, this 36-year old Stellarton man dealing with debilitating Crohn’s disease was arrested in February, 2014, when the Pictou County Integrated Street Crime Unit executed a warrant to search his home.  MacDonald successfully obtained a new authorization for his medical cannabis several months later.

MacDonald appeared in the Nova Scotia Court of Appeal on September 9th to appeal his CDSA 7 marijuana production charge based on previous ineffective counsel. He concluded, after meeting with his lawyer just moments prior to court, that he had lost faith in her ability to represent him. After briefly convening court, the appeal judges returned to the bench to grant MacDonald’s request.  Justice Beveridge acknowledged that this case was of importance to MacDonald, and that it was therefore crucial that he had counsel of whom who he felt sure. Beveridge apologized to “Mr. MacDonald’s supporters, some of whom have come a distance to be here, for making the trip in vain.”

MUMM had held a rally with 16 supporters prior to this hearing, and it received excellent front-page coverage in the provincial paper: The Chronicle Herald. Once again the mantra “Stop Arresting Patients” was heard in this province, so we certainly didn’t concur with the judge’s assessment that our time had been wasted!  MacDonald will be back in Appeal Court on Oct. 1st to set a new date for trial. 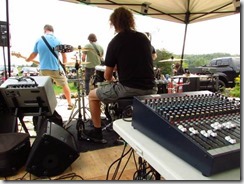 The last weekend of August marked MUMM’s 8th annual Harvest Fest, and the distribution of the judge’s gift bags to start the John Cook MUMMorial Cup. This event was held in the beautiful Annapolis Valley’s Mount Denson. (Follow “The Maritimers Unite for Medical Marijuana Society” on Facebook as details of next year’s event evolve!)  John Cook was MUMM’s original Vice Chair and Co-founder. Sadly, due to health complications in 2012, John was forced to resign as Director of Cannabis Buyer’s Club of Canada’s Halifax outlet after nearly 10 years of helping patients to access their medication; on August 31, 2013, he passed away. Words like selfless, compassionate, heart of gold, understanding and empathy were prominent in his obituary.  John was a constant shining example of leading by example, of how to run an open, transparent compassion club, and how to be an activist with real integrity. John’s dedication to patients and the medical cannabis cause was unwavering. Therefore, it was with great pride that MUMM dedicated its inaugural annual cup to John’s memory. When the name: ‘The John Cook MUMMorial Cup’ was proposed, it seemed like such a natural fit and a wonderful way to create a legacy for John!

Although each category in the cup was awarded a trophy or medal at MUMM’s Annual General Meeting and Awards ceremony on September 12 by John’s wife, Krista, a “Judge’s Choice” trophy has been designated to bear the name of the individual who scores the most overall points, by average, in all categories. This cup will rotate among the various shops that sponsored this event, and will travel with us as we host various educational events here in Atlantic Canada.  Jose “Pedro” Dominguez, of Quebec, will have his name engraved as this year’s Judge’s Choice for his amazing New York City Diesel entry.

Who knows, maybe next year it will have your name on it.

Next article My Human Rights Complaint

Digest Admin·July 19, 2016
There are no comments yet No comments

A Note From The Publisher