Deprecated: The $control_id argument is deprecated since version 3.5.0! in /home/oq5ayjaeetjt/public_html/wp-content/plugins/elementor/modules/dev-tools/deprecation.php on line 304
 Minister Ambrose on Cannabis Dispensaries - A Translation
Skip to content 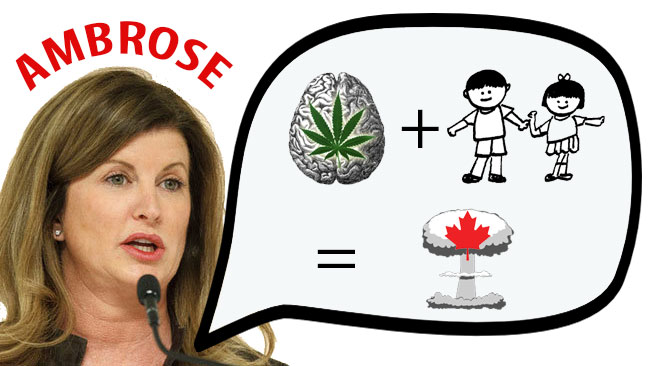 If you are not a Canadian, let me introduce you to Rona Ambrose, Canada’s Minister of Health and Nurse Ratched for the Harper Government, Canada’s ruling so-called Conservatives.  On April 25 she was speaking with CBC host Stephen Quinn, responding to the Vancouver City Council’s recent decision to regulate medical cannabis dispensaries as legitimate businesses.  Canadians who want medical cannabis, said Nurse Rona, must stick with the Harper plan.  That plan is mail order only from over-securitized licensed producers only, not dispensaries.  Private mega grow-bunkers, security cameras and barbed wire.  That’s it.  Sensible BC’s Dana Larsen has called for a competition to remix this interview.  I don’t do sound remixes.  But here’s my take, alphabetical style.

Stephen Quinn:  Does marijuana not have some medicinal value?

TRANSLATION:  Before there were clinical trials on earth, there were no medicines.  So marijuana could never have been a medicine.  Further, marijuana is not likely to go through pharmaceutically funded trials of that sort.   So it will never be a medicine. Also, it is not a medicine unless we say it is.  A plant does not produce medicine until we say it does.  In fact, plant chemistry does not define what is medicinal.  Health Canada Does.  It is important for Canadians to understand this idea before the next election.

Stephen Quinn:  But there are thousands of Canadians who feel that it helps to alleviate symptoms of their illnesses.  Are they just making this up?

Nurse Rona:  It’s not for me to say.  There is no research to show conclusively that marijuana helps with any illness.  We are focused on youth, and the science tells us irrefutably that marijuana will damage the developing brain.  Canadians need to know this.

TRANSLATION:  When we took office in 2006, we made sure to un-fund the five cannabis research projects funded by the previous government.  So as I said: There is no research.  Moreover:  Time to change the subject.  It’s about youth, Stephen.  Our government has looked at studies on cannabis and youth.  Scientists cannot agree on the results.  This fact proves irrefutably that marijuana is bad for youth.  There is an election coming.  Canadians need to be on board with this.

Stephen Quinn:  So why do you have a program to sell marijuana at all?

Nurse Rona:  About 10 years ago the courts ruled that if certain Canadians believe that marijuana helps them, they should have access to it.  They can mail order dried marijuana from our Licensed Producers.

TRANSLATION:  Certain Canadians have odd beliefs.  When their pain and Illness goes away they think they are being helped.  What can we do?  The courts are on their side.  At least we make sure they only have access to the dried stuff.  The derivatives must remain illegal.  They look too much like medicine.  Canadian voters need to get a grip.  There is an election coming.

Stephen Quinn:  The Canadian Centre for Mental Health, Chief Medical Officers for BC, Saskatchewan and Nova Scotia, and the Canadian Public Health Association support legalization.  Why don’t you heed them?

Nurse Rona:  A UNICEF study tells us that too many Canadian young people use marijuana.  If we legalize it then we normalize it, and that sends a bad message to our youth.  They will think that it is not dangerous.  But it is very dangerous.

TRANSLATION:  Actually, Stephen, this government doesn’t care about the opinions of Canadian professionals.  That is why we have muzzled scientists, and shredded their libraries.  And this government never wants marijuana to be something normal.  Medicinal marijuana patients are never to feel normal—ever.  It is only when they realize that they are quintessentially abnormal that our youth will be safe.  It is only when they feel abnormal that Canadians will be safe.  There is an election coming.  Do you want marijuana stores on every corner?

Stephen Quinn:  But wait.  Shouldn’t we regulate it like alcohol?  We don’t have alcohol stores on every corner.

Nurse Rona:  We do not want a Trudeau style Canada with a marijuana store on every corner.

TRANSLATION:  Stephen, when I say “a marijuana store on every corner” Canadian parents tremble.  And that’s the kind of response we need.  There is an election coming.  This is no time for comparisons.  I’ll say it again.  Listen Canada.  THERE COULD SOON BE A MARIJUANA STORE ON EVERY CORNER.

Stephen Quinn:  But the polls show that the majority of Canadians are in favour of liberalizing the laws.

Nurse Rona:  Our government does not rule by polls.  As Health Minister I am concerned about our youth.  Marijuana is a public health issue.  It causes psychosis, schizophrenia, and permanent brain damage.

TRANSLATION:  Yes.  We saw the polls.  Our key task, if you haven’t noticed, is to change the subject.  We are prepared to spend 7 million more dollars terrifying every Canadian voter who is a parent, and every Canadian parent who is a voter.  Parents:  This is Nurse Rona on CBC radio.  There is an election coming.  Do you want that Liberal, Justin Trudeau, to tamper with your kids’ brains?  He wants to sell them marijuana—on every corner.

Stephen Quinn:  But proponents do not advocate the idea of corner stores.  They say they would like a properly regulated system.

Nurse Rona:  We do not want a Justin Trudeau Canada, with marijuana stores on every corner.  And the dispensaries out there are not regulated at all for safety or efficacy.  And they are operating illegally.

TRANSLATION:  I checked my notes this morning, and calculated that I could say “corner store” combined with “Trudeau” at least 10 times during this interview.  Our government believes that this number is essential for our message to sink in.  We have done the cognitive research.  How many times does that make now?  We need a few more.  TRUDEAU-CORNER STORE MARIJUANA; TRUDEAU-CORNER STORE MARIJUANA; TRUDEAU……

Anyway.  The dispensaries are operating illegally.  This fact proves that they are not properly regulated.

SUB-TRANSLATION:  Before the advent of modern governments like ours, nothing was ever regulated.  There were never any guilds or other professional associations—no beer makers or baker’s guilds, no masons, carpenters, tanners, cobblers, cloth makers, candle makers, or apothecaries.  Remember, Stephen: dispensaries do not create regulations.  Health Canada does.  And by the way, there is an election coming.  So—CORNER STORE MARIJUANA plus TRUDEAU.  I think that makes 6.  Hold on: let me repeat that four more times.

Stephen Quinn:  Thank you for your time today, Rona

Nurse Rona:  Thank you Stephen.  We will talk again later.

TRANSLATION:  We are going to have cut these idiots’ budget again.   Maybe we can shut them down altogether.  We can’t have the CBC undermining our election plans.  There is an election coming.  Voters, here is the all-important pre-election mantra:  CORNER STORE MARIJUANA—TRUDEAU—YOUTH PSYCHOSIS—SCHIZOPHRENIA—BRAIN DAMAGE.  The money we save from junking the CBC will help us all to repeat this mantra often.

Don’t give your child’s brain to Trudeau.  Give it to the Harper Conservatives.  We too have oil…tar sands oil—good for what ails you.

PERSONAL NOTE:  Soon after this interview, Victoria City Council decided to follow Vancouver’s example.  In my fair hometown, there will now be regulated medical cannabis dispensaries.  I hope that Nurse Rona’s interview helped motivate the Victoria City Council, whose members voted almost unanimously on the regulation issue.  If the Conservatives can produce this sort of rubbish for long enough, we may even dump them next October.  The sound remixes will help too.  Keep it up Nurse Rona.