How the NDP missed its chance to come out strong on marijuana, and why it’s not too late to make it right

For four decades, the NDP was the standard-bearer for sensible marijuana laws.  From the time of the LeDain Commission report of 1971, it was the most progressive voice in Parliament for marijuana reform. So how did the NDP manage to lose that position to Trudeau’s Liberals?

In 1971, the NDP introduced a bill to decriminalize marijuana possession, but it was voted down by the Liberal majority. In 1978, decrim became official NDP policy, and party leader Ed Broadbent made it a part of the 1980 election campaign.

In 1999, the NDP convention reaffirmed the party’s support for decrim, and in 2003, new leader Jack Layton boldly appeared on Pot-TV with Marc Emery, saying “our party is in favour of modernizing our marijuana laws.” Layton called upon Pot-TV viewers to join the NDP.

NO ROOM FOR LEGALIZERS

Yet as Layton’s popularity grew and the NDP saw its support increase, his advisors encouraged him to distance himself from the cannabis community.  Marijuana was included in the NDP’s 2004 election platform, but has not been mentioned in any platform policy book since.

Layton’s subsequent waffling on the marijuana issue came from a disconnection between his true support for full legalization, and pressure from advisors like Brad Lavigne to avoid the issue.  His clear and easy going discussions of the issue on Pot-TV were replaced with a confusing, unsure message.

My run as a federal candidate in 2008 certainly didn’t help.  I had to resign a few weeks into the campaign after Liberal party operatives released heavily-edited videos showing me smoking pot and taking LSD.

In his book Building the Orange Wave, then NDP National Director Brad Lavigne writes that he knew in advance I would be a problematic candidate.  Yet instead of approaching me openly about any potential problems before the campaign started, he and the party’s inner circle treated me with disdain.  They then humiliated me by forcing me to resign as a candidate in the middle of the campaign.  With a few respectful conversations, this could all have been avoided.

A year later, Lavigne went so far as to ban me personally from the NDP Convention in Halifax.  He also did his utmost to destroy the pro-legalization movement within the party. His team acted undemocratically by manipulating the convention voting process to ensure that a resolution on legal marijuana never made it to the floor for debate.  Despite the fact that legalizing marijuana had broad grassroots support, Lavigne made it clear that the NDP power brokers did not want any help from the legalizers.

Upon becoming leader, Mulcair had the opportunity to rebrand the party.  Unfortunately, he decided to be more like Brad Lavigne and less like Jack Layton.  Mulcair immediately alienated the marijuana movement. Instead of focusing on the core issues around ending marijuana prohibition, he brought up tired myths about marijuana’s increased potency.

NDP strategists seem to think that marijuana is only an issue for fringe parties, and that becoming a serious mainstream contender means giving up on such impractical idealism.  The success of Trudeau after announcing his pot policy shows that they are wrong.

It’s true that most Canadians don’t rank marijuana as a top issue when a pollster calls, but it is nevertheless a powerful issue for drawing attention and stirring debate.  Marijuana is a potent wedge issue, one that quickly serves to define a candidate.  On marijuana, Harper is mean and vindictive, Mulcair is evasive and shifty, while Trudeau is honest and modern.

Trudeau has released very few policy positions, and of those, his stand on marijuana is the only prominent one that is entirely in opposition to the Conservatives.  Indeed, Trudeau’s stand on marijuana is by far his most well-known policy.  If the NDP had adopted a better marijuana policy when they had the chance, Trudeau would be left without a defining issue.

By being reluctant on this important issue, Mulcair’s NDP left an opening for the Liberals, which they have taken.  I’m sure that the NDP now feels that to come out strong on marijuana will make them look like they’re falling into line behind Trudeau’s stance.

A PRESCRIPTION FOR VICTORY 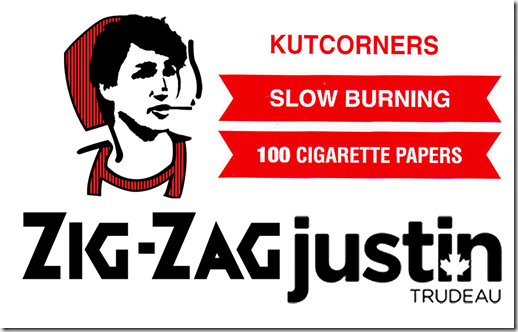 Trudeau has taken ownership of the marijuana issue, and at this point Mulcair is likely to keep his current stance, supporting a vague form of decriminalization while tut-tutting about the dangers of increased potency. Yet this would be a mistake.

Marijuana is an issue that is growing in strength and prominence every year. This fall, voters in Alaska, Oregon and Washington DC will have the chance to bring their states into the legalization fold with Colorado and Washington. It is going to seem more and more inevitable that Canada can and should also legalize.

I believe that if the NDP had fully embraced legalization under Layton, they would have been ahead of the curve, and could have used this issue to showcase their forward-thinking approach.  I am also convinced that if Mulcair had called for legalization upon becoming leader, the NDP would be leading in the polls today.  Trudeau would have been left without a signature issue, and his endorsement of legalization would have been seen as just following the NDP lead.

Instead, the NDP was too afraid of controversy, and now they’ve lost the momentum they gained under Layton.  The NDP has fallen back to third place in the polls, and their evasiveness on marijuana policy is a big part of that drop.

My prescription for the NDP is to get back to their roots, embrace the populist honesty that marked Jack Layton’s campaign style, and present a detailed plan on how they will repeal marijuana prohibition upon forming government.  That is a winning strategy, and it’s not too late to make it happen.

SENSIBLE BC FIGHTS ON

Sensible BC was launched last year to try and force a marijuana referendum in BC by collecting signatures. Although we didn’t hit the target to get a provincial vote, we did build an impressive team of volunteers and activists across the province.

We’re continuing our push for marijuana reform, and have been busy building local chapters, putting on protests and growing our team strength. We just hosted our first provincial convention in October.  Sensible BC has become Canada’s largest legalization team, and we invite you to join us!

Sensible BC will be working across the province to help elect the candidates who most support reform marijuana reform and who have the best chance of winning. We have the numbers to start making a real difference, but we’ll need your help!

Our approach will be non-partisan. For example, we would almost certainly be endorsing sitting MPs Libby Davies (NDP), Joyce Murray (Liberal) and Elizabeth May (Green) as all three have been outspoken in their support for legalization.

I invite you to get involved with our growing network of community leaders and local activists. We can help you to make change a reality, in your own neighbourhood and all across the country. Don’t let this opportunity pass you by, contact us and become a part of the Sensible BC team today!

Russell Barth I sometimes think that if Earth ever joined some sort of Galactic Federation, Ottawa would be known throughout the galaxy – not just the world – as the lamest place to visit. Name anything from public transit to entertainment to City Council, and if you don’t find yourself getting bored or angry, you’ll […]

A Survey of American Medical School’s Acceptance of the Science of the ECS (Endocannabinoid System) By Dr. David Allen, Nathan Stewart, Sioux Colombe and Ron Mullins   Introduction The discovery of the endocannabinoid system (ECS) is the single most important scientific medical discovery since the recognition of sterile surgical technique. As our knowledge expands, we […]