Deprecated: The $control_id argument is deprecated since version 3.5.0! in /home/oq5ayjaeetjt/public_html/wp-content/plugins/elementor/modules/dev-tools/deprecation.php on line 304
 Police Raid Plans: Are You Prepared? - Cannabis Digest
Skip to content

Anyone working in the illegal cannabis industry needs to be prepared to get arrested at any moment.  A recent rash of police raids on medical cannabis dispensaries across Canada have shown that some organizations are much more prepared than others to deal with the consequences.  Since the Victoria Cannabis Buyers Club survived 4 police raids in 2002-03, and one on it bakery in 2009 that lead to a huge victory for extracts at the Supreme Court of Canada, I feel like it is important for me to share some of my experiences, insights and concerns.

Now I should remind everyone that I am not a lawyer, I just have a lot of experience getting arrested and going to court as a defendant or a witness.  A brief history of my fight with the law would take up an entire blog.  This is not legal advice as much as common sense.

Rule number one is: If you cannot do the time, do not do the crime.  While many of us feel the law is wrong, putting yourself on the front line puts you personally at risk of going to jail, losing assets and/or exposing yourself to friends, family and the government, and also makes you a poster-child for the cause.  If you have a embarrassing criminal record, have children or otherwise are not prepared for the kind of public scrutiny that comes with a police raid, then you should likely step back and let someone else take the risk.

One of my other big rules is to break just one law at a time.  Avoiding the sale and possession of other drugs, even if you firmly believe you have every right to use them too, is the best way to ensure that if you get arrested at work you will not face other charges that could harm your credibility.  While I strongly believe the war on drugs is a failure on a catastrophic level, I also realize it will be best dismantled one drug at a time.

Organizations involved in public cannabis sales needs to have a clear plan for employees to follow in case of a raid.  Employees need to know what to do when police enter, how to behave when being searched and questioned, what to expect when spending the night or weekend in jail, who their lawyer is and have a backup plan if the organization collapses.  While it is impossible to foresee every possibility, being prepared is the best way to feel comfortable at work and ensure if the worst does happen that the damage caused by a police raid is kept to a minimum.

Never have all of the organization’s cannabis openly available to police where they can easily find it, including safes.  Every time our club was raided the police were not able to find large stashes of herb that allowed us to reopen almost immediately.  If it is all hidden they they will search until it is found, but typically they do not like to get down on their knees and look around or otherwise look too hard if they have found some already.

If the police enter during operating hours and tell everyone they are under arrest, then the best thing a senior staff person can do is loudly declare that all of the cannabis in the store belongs to them.  This virtually stops the police from prosecuting anyone else unless they have proof that the person they arrested had full knowledge and control of the facility.  This was something I did during the second police raid at the VCBC and it totally threw the police off, letting everyone else walk out of the club after a quick search.

Generally one does not want to admit to anything to the police when being arrested or interrogated as they tend to twist anything one says around in court.  It might seem righteous to condemn them for their actions but admitting you are involved in the distribution of cannabis for any reason could make a conviction stick in front of the wrong judge.  If at all possible be polite to the police, as it is important to convince them that people in this industry are nice, compassionate, concerned citizens and being angry only helps them justify being mean to us.

Even though you may think they caught you red-handed, do not admit to knowing anything about the organization.  It actually takes a lot of evidence for the crown to prove you have control over a situation, unless you have sold to an undercover police officer or other informant already.  Just knowing a lot is not enough to find you guilty and just being in the space does not prove you are in control.

Wear appropriate clothing every day you go to work, for both the public and any potential judge you may end up in front of.  They can be very judgemental of the appearance of a defendant.  After spending a night in jail one often looks pretty rough.  If you are smart enough to have long underwear on, then pull them up to your knees during the search or they will take them away for fear you may hang yourself in the cell.  The cells are very cold, even in the summer, so having a warm shirt is also very important as they only allow you to wear one in the cell.

Having a good relationship with a lawyer before a police raid is wonderful but is not always possible.  At the very least, employees in dispensaries need to know the name of one local lawyer along with legend Kirk Tousaw.  His very name will strike fear into the hearts of prosecutors across Canada.  However, since Kirk is so very busy he cannot be counted on to help someone in the process of being arrested, especially in the cases of multiple raids, so it is very important to know at least one local lawyer. 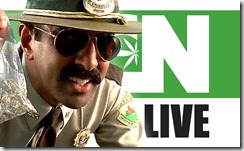 Most often the police will make claims that you will be punished quite harshly by the courts and will suggest that it is best to sign a release form rather than spending the night in jail and going before a judge the next day.  The release form will have a number of conditions that you have to agree to.  I have never signed a form and have spent two nights in jail so I could get in front of a judge. Usually a judge will set conditions that are less severe.  Though spending a night in jail is uncomfortable, getting in front of a judge gives you an opportunity to argue the conditions would be an unreasonable hardship that you should not have to suffer while awaiting trial.

To be honest, I have broken many of the conditions imposed upon me by judges in regards to not selling cannabis to patients because I considered supplying medicine to be more important than my own personal safety.  The nights I spent in jail unable to sleep were helped by thinking of people in wheelchairs or dealing other pains that stopped them from being comfortable on any night if they did not have a good supply of the herb.  Of course getting caught breaking your conditions can result in harsh punishments but I always found that by being careful I could break court conditions like no contact orders and no consumption of cannabis.

Since there is a chance that employees busted in a raid will be unable to talk with their former employer upon release, it is good to have a person prepared to help communicate between all parties that is not the lawyer.  Having a solid dispensary member to act as the main source of information for the group after a raid is an excellent way of coordinating legal and fundraising efforts.  Having someone not involved in the distribution of the herb speak to the media and coordinate the legal fight is the safest way to continue operating after a raid.

If the organization is strong enough to open after a raid, which most functional dispensaries should be prepared for, will mean that there is a means to pay for the lawyers with ongoing sales and other fundraising.  Employees charged in police raids at dispensaries should never be forced to pay for their legal costs, even if the store cannot remain open.  It is the responsibility of the people in charge of these organizations to ensure the staff have the full support of the group when taking the risk of direct sales to the public.

There are many more things to consider during a police raid but this should help those getting involved in the cannabis trade while it is still technically illegal some things to think about.  While the chances of getting arrested in this field are diminishing on a daily basis, until legalization protects people from the law these basic thoughts will help minimize the damage these raids can cause to the individuals and organizations involved.

Compiled and written by Ted Smith and Jacq Kittel We are pleased to present our formal answers to Health Canada’s review of the Cannabis Act. They are conducting this review as a key component of the legislative process to gather public input via online engagement. The Cannabis Act has been highly problematic and inadequate since […]