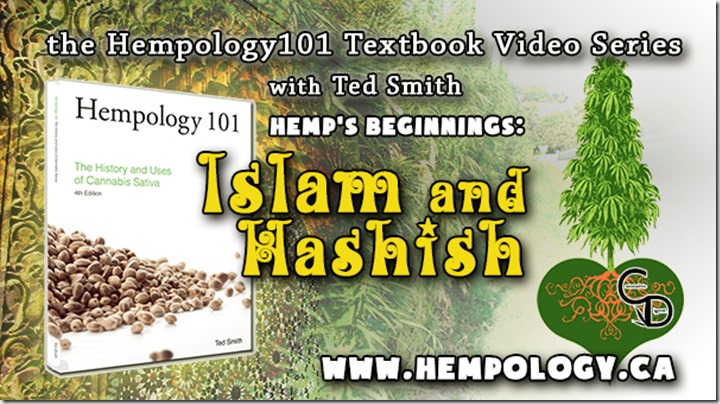 While it has been understood that hash has been used by Islamic followers since its beginnings, the history of cannabis in that religion has been obscured and hidden.  Certainly hash was not an integral part of the life of Mohammed, but it is not certain whether or not he ever used it himself.  However, there are cannabis clues sprinkled throughout Islamic lore.

No doubt early followers of Islam would have been in constant contact with the Gnostics and followers of Mithra, both of which religions used cannabis in ceremony.  The mysterious Sufi sects of Islam shared several traditions with these other religions, including a seven stage initiation process.  The Sufis drank bhang in honour of the Moslem prophet Al-Khidr, the “Green One” or “Verdant One”.  Al-Khidr is the Islamic patron saint of cannabis.

In his book, GREEN GOLD, THE TREE OF LIFE: MARIJUANA IN MAGIC AND RELIGION, Chris Bennett highlights the story of Sheik Haydar, a Persian founder of a Sufi sect.  According to Bennett, Haydar ‘discovered’ the joys of eating cannabis while wandering outside his monastery, sharing this knowledge with his followers but asking them to keep it secret.  Haydar is quoted as saying, “God has granted you the privilege of knowing the secrets of the leaves.  Thus when you eat is your dense worries may disappear and your exalted minds may become polished.”

While the use of cannabis is generally frowned upon by the leaders of Islam, eating and smoking hash has been a common tradition by many of its followers for centuries.

In the next segment in this series of videos I will discuss the most known hash loving sect of Islam, the Hashishins.  These short videos are being made to share information contained in my book, HEMPOLOGY 101: THE HISTORY AND USES OF CANNABIS SATIVA.  Subscribe to our Youtube channel to see them all or better yet buy my book.

David B. Allen M.D. msbluesman@cableone.net The Rootless Transport Mechanism There is an easy way to deliver substances to your plant leaves by capillary action. This can be done by bypassing the plants roots. Much like a rose or other flower in a vase of water, cannabis can uptake fluids and actually remain “alive” if the […]