There are two Ottawa’s really: The federal government Ottawa, that Canadians from coast to coast complain about when they watch TV or read the news papers; and the city itself.

Having lived in Ottawa since Halloween of 1994, I have almost become accustomed to the cultural retardation that pervades so much of daily life here.  Sure, Ottawa is clean, it looks pretty nice, has a few nice museums, and it has a low crime rate.  Even the “shady” parts of town are still pretty safe for old people and kids to walk around in.  But just as Ottawa lacks the dangers and discomforts of a larger city like Montreal or Toronto, it also lacks, in my opinion, any of the cool things that come with living in a city of nearly one million people.  Like marijuana vapour lounges, for example.  The kinds of places that have been more-or-less accepted in cities like Toronto and Vancouver would be considered outlandish and outrageous to the podunk sensibilities of a city like Ottawa.

Imagine a cross between the movies Pleasantville, The Truman Show, and Groundhog Day, all sitting in a bowl of Fawlty Towers sauce, and you get an idea about what it feels like to be living in Ottawa.  To me, it is like the city is trying to stay stuck in the year 1964.

But in late April of 2015, a local man named Wayne Robillard opened a marijuana vapour lounge in an aging building at 29 Montreal Road in the Ottawa neighbourhood of Vanier. For countless years before that, the address had been home to a used clothing store. 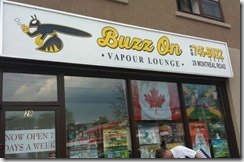 At first, I was very skeptical.  Every attempt to open a compassion club in Ottawa had failed – for varying reasons – so the idea that Ottawa’s lazy cops, ridiculous city council, or the Gladys Kravitz-like hand-wringers that make up a big chunk of the city’s population would tolerate such a gathering place was – to me – outlandish. When BuzzOn first made the news in late April, I emailed an Ottawa Sun reporter with the subject line “Vapour Lounge” and said simply: “I give it a week.” “That’s generous,” was his reply.

Many could assume that I was skeptical about the people running the place, it being Ottawa and all.  But not so.  I didn’t know Robillard or the other people involved, so I had no way of knowing what kind of operation to expect.  I figured that I would not be frequenting the place often, or at all, because I was pretty sure that I would spend a lot of time talking to cops if I did.  Crime is low in Ottawa.  So low, in fact, that the police seem to be trying to find ways to busy themselves to justify their numbers, their powers, their costs, and their behaviour.

But then something totally expected happened: Ottawa Mayor Jim Watson – a ribbon-cutting smile-bot who seems more interested in giving speeches at seniors’ homes and serving up burgers at public functions than he is in actually doing what needs to be done for the city – denounced the lounge. He voiced his opinion in a scrum on April 29th, saying: “I think it’s the last thing this city needs,” and “If someone has a medical license for marijuana, then please go and use that product on your property in your own house, but please don’t bring it in an establishment where other people can be affected by the second-hand smoke.”

When I told my epileptic wife (who is pretty much stuck at home 95% of the time, tethered to her volcano), she cried. My decision to not bother going to BuzzOn was immediately replaced by the decision to go there as often as possible, for as long as possible.

My wife and I even volunteered there one day, as Robillard and his associates all had to be somewhere for a few hours.  Only one patron came in during that three-hour afternoon stretch, and since it was this young man’s first time using a volcano, I coached him through the procedure.  Coached several others over the four-day period we were there as well. 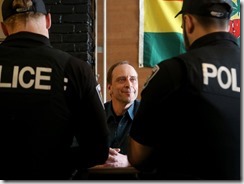 Despite the fact that the police visited a few times (dragging one guy out and taking his weed without charging him), the operation seemed to be going pretty smoothly for the first few weeks.  Attendance, however, was quite low, averaging about 10-15 customers per day for the first week or so, until the media coverage got their numbers up to 40-60 a day.

Then, on May 15th, Robillard closed the doors temporarily to deal with a growing list of building and licensing issues.  Was it a lounge or a retail venue?  A private club or public space? City Hall seemed determined to make BuzzOn “earn it”.

Further, the building itself was in need of upgrades, so it wasn’t like The City “shut BuzzOn down” because it was a pot lounge.  They just made Robillard jump through all the hoops that any similar business owner would have to jump through.  It would seem, however, that they were given none of the leniency extended to other upstart businesses to get certain things accomplished.

“I spoke to many other business owners,” said Robillard, “and they had never heard of a place being so closely scrutinized and repeatedly hassled as we were.”

Robillard suspects the Mayor himself was behind a lot of it, ordering his minions to make life as difficult as possible for BuzzOn because of how he personally felt about it.  I would tend to disagree, based on my assumption that Watson was too busy kissing the rings of local developers to even bother with some upstart pothead venue in the poorest ward in town.  But someone at City Hall sure seemed to have their bum in a knot about it, and BuzzOn was sent inspector after inspector, and cited with violation after violation in regards to exits, lighting for exit signs, disability access, ventilation, and exterior appearance.

It took until Oct. 15th before Robillard could open the doors to the public again, and attendance has been picking up steadily.

The venue itself is quite nice.  As you enter, you are greeted by a bar/counter where you pay to rent the gear and get the volcano bags and snacks. There are seats for as many as 90 people in total, with a total of seven Volcanos on tables in the rear half of the lounge.  A large TV screen and video game console sits in the northwest corner at the back, and a large PA system provides a variety of music.

The newly built bathrooms are accommodating to those with or without wheelchairs, and aside from drinks and snacks being sold at the lounge itself, food from select local vendors can be ordered for delivery to the lounge.

The rules are simple: You have to bring your own cannabis products as none are sold on site, you must be 18 or older, no booze, no mooching, no tobacco, and no selling.  Sharing joints and volcano bags is obviously tolerated, as the whole point of the operation is for pot users to socialize somewhere other than their own homes or in public parks.

The lounge operates on the premise that anyone who wants to use cannabis there is a licensed user.  But since no one but a cop is allowed to ask anyone if they are a licensed user or not (it is a violation of people’s privacy rights), Robillard simply assumes everyone who comes in is a licensed user.  He asks only for proof of age, and the “18 and older” rule is a formality, as licensed pot users come in every age group from toddlers to seniors, and no law says they cannot enjoy the lounge like adults.

Since their re-opening in October, attendance has been averaging about 20 a day, but some days are very slow.  What the future holds for BuzzOn, no one knows for sure, but Robillard and his associates have dug in their heels for a long fight. “We aren’t going anywhere,” he said.

They have placed ads in the Ottawa Sun (the only publication that would welcome their advertising), but word-of-mouth seems to be the main way that Ottawa residents are finding out about the lounge.

Personally, I hope BuzzOn succeeds, because unlike Mayor Watson, I think a pot vapour lounge is exactly what this city has needed for a very long time. 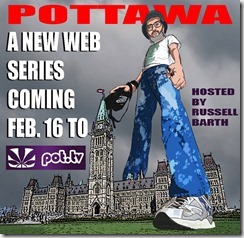