Deprecated: The $control_id argument is deprecated since version 3.5.0! in /home/oq5ayjaeetjt/public_html/wp-content/plugins/elementor/modules/dev-tools/deprecation.php on line 304
 Trial by Fire – Part 3 - Cannabis Digest
Skip to content

What I see forming through these trials and tribulations is a kind of symbiosis between the courts and various activist groups, mediated by the now random and circumstantial police interventions that result from nothing more than broken laws. These broken laws force encounters between us and an overburdened judicial system.

Despite the unfortunate albatross that these trials tie about the court’s neck, history has shown that in continuing to endure these processes, we not only have an opportunity to make our voice heard to those with the power to enforce change, but also an opportunity to learn directly from these people how we can continue to change our own practices and policies in order to together create a model that balances the bureaucracy’s need for institutional homogeneity with the many and diverse needs and circumstances of our membership. In this sense, all of the legal proceedings that have happened since the implementation of the MMAR surrounding the medicinal use of cannabis have, in fact, made up a sort of incredibly expensive and inefficient interim solution to the plethora of problems created initially by the MMAR.

Though this relationship might seem less than ideal, it is the best tool we have at the moment for continuing to create positive change in the MMAR and the anti-prohibition movement in general. Owen’s success in his challenge to the Supreme Court of BC was a great one, but the Supreme Court of Canada will have final rule. This hearing will be on March 20, 2015, and will be brief.* 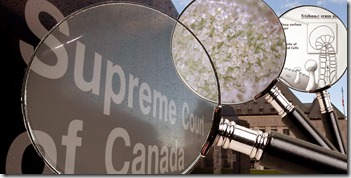 Much ground has been broken in this ongoing fight, the law is still broken, and so there will doubtlessly be more senseless confrontations between a frustrated court system and a legalization movement that, though it is stronger now than ever, continues to grow with increasing momentum, and continues to gain influence and change society in ways that seemed impossible 10 years ago.

And so, with the support of the media, the courts, many politicians, and the majority of the public, Owen will go back to court next week to once more beat a broken law that was declared unconstitutional in 2012. Let this “trial by fire” continue, and let it burn away at the farcical restrictions imposed by the MMAR, leaving behind what will fundamentally amount to a restoration of the basic right of all living beings to eat, smoke, and drink as they like.

*updates added by the editor