Deprecated: The $control_id argument is deprecated since version 3.5.0! in /home/oq5ayjaeetjt/public_html/wp-content/plugins/elementor/modules/dev-tools/deprecation.php on line 304
 Gayle Quin: The Legend Lives On - Cannabis Digest
Skip to content 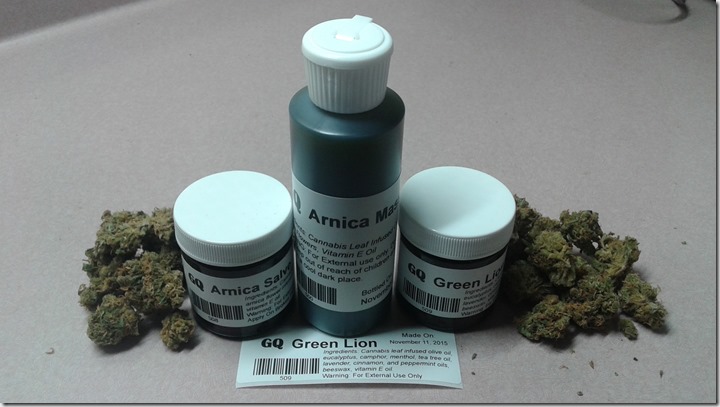 One year ago this month it seemed cancer was taking the life away from one of the country’s most dedicated activists, my love Gayle Quin.  While she has not recovered to her former self, there is still a faint hope that between cannabis and other medicines we can bring her back to the dance floor again.  No matter how much longer she lives, Gayle Quin will always be remembered as a pioneer in the medical cannabis fields and her legacy will grow far beyond even her wildest dreams.

For many, Gayle Quin has become an inspiration.  Her life story is full of struggle and perseverance.  With front page stories featuring her in Skunk Magazine, Monday Magazine and of course the Cannabis Digest, her professional accomplishments are only overshadowed by her majestic personality. 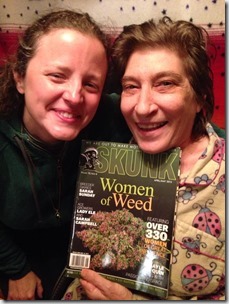 Cancer is such a scary disease that it is easy to give up hope against it.  When she first lost her breast and part of her armpit 4 ½ years ago, we made sure that every second of our lives together was filled with love, laughter and hard work.  We went to Jamaica, toured across the country, published my textbook, organized the Owen Smith trial and turned the Victoria Cannabis Buyers Club into a non-profit society.  We tried to fill every moment possible with meaningful activities.

Then two years ago another lump of cancer was removed and she learned it had spread into her bones. Her health went downhill as each month went by.  During this time she tried all sorts of natural medicines to fight the cancer, including cannabis pills made with hash.  Every day she ate dozens of capsules of cannabis and other medicines.

Then one year ago it seemed all was lost.  Two of her vertebrate collapsed to about ⅔ their normal size.  The drugs they gave her to kill the pain made her nauseous and after the fourth day of not eating there was little to hope for.

It was at that point we started giving her cannabis suppositories, something that was fairly new to almost everyone at the time.  The cannabis suppositories made a big difference, calming down her stomach enough she could start eating a grape at a time and some cannabis pills, too.  They also clearly helped her relax more, helping her sleep despite being in a hospital. 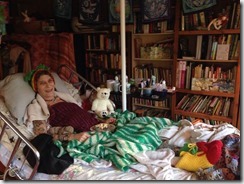 Since she could barely eat there was no use trying to eat any pills other than the cannabis ones, as they were the only ones that were definitely helping a little with pain, eating, sleeping and relaxing her muscles.  Her fear of consuming cannabis oils made with solvents disappeared, as death seemed close and relief was more important than anything at that point.  Many, many people began contributing cannabis and cannabis oils in a desperate attempt to ease her suffering.  She started eating massive doses of cannabis oils every day.

When she was brought home last November, the nurses were so sure she was going to die soon they were reluctant to leave more than a few days worth of diapers, sorry briefs.  Since she was taking nothing from the doctor to fight the cancer, all of the medical professionals she worked with felt her time had come and the best we could do was try to kill the pain as much as possible.  She was taking a steroid, tummy medicine and fentanyl (an opiate painkiller), but with a long history of liver problems she was certain they were killing her as much as helping.

Aside from eating massive doses of cannabis oils, Gayle also did a few other things to help fight the cancer.  Very soon upon getting home she started using a small device that emits magnetic energy.  The brand name is Sota.  I began turning it on and placing it near her broken back and in less than a week it there were noticeable improvements.  As her food intake increased she began to eat a few more medicines, like chaga mushrooms ground up into capsules.

In March, I went to Ottawa to witness Kirk Tousaw defend Owen Smith before the Supreme Court of Canada.  Her health had been improving so much that when I returned we began lowering her dose of the narcotic.  Her pain levels did not seem to increase much, and the steady donations of cannabis meant that she had plenty of painkillers around for when she needed them.  By the end of June she was off all of the prescription drugs.

In the meantime her mobility was improving.  By the New Year she was able to get out of bed and into a wheelchair long.  Very soon after she was having a shower, with a stool.  By the summer she was spending 6 to 8 hours a day in the wheelchair.  We started to put cushions in a wheelbarrow so I could take her around the yard, bringing her to the garden to watch me work, the tipi to cook a veggie dog, and even taking her downtown Cobble Hill to go through a drive-through where we got hot chocolate to drink in the park.

Then in early August the pain in her back reappeared, putting her back down in bed.  About a month later her right leg started to become very painful.  As the weeks went by the pain got worse.  In a desperate attempt to know what was happening, we sent her to the hospital for xrays.  When the doctor told us that her leg was bending and breaking it seemed all hope was lost.  Then a surgeon stepped up and said he could fix the problem.  The next day he put a stainless steel rod down her right femur bone, from her hip to her knee.  That was Oct 16. 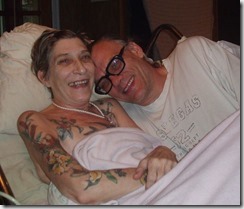 About one month later and her leg and hip are feeling better, though she has still not sat up on the side of the bed.  That is likely because her back is in such a bad state.  We were surprised to learn that there were 2 broken vertebrae in her back according to the new xray, one that broke last year and a new one.  The xrays also show the cancer progressing in her hip bones.

Despite everything she has gone through, Gayle still displays an unbelievable will to live.  She is constantly making new crafts and trying new things to help her health turn around.  She is still eating volumes of cannabis oils, though donations have slowed down over time.  We are so eternally grateful for all of the donations of money, cannabis, food, and cannabis oils that have sustained us during these dark days.  My work with the Cannabis Digest and Hempology 101 has been fulfilling but I have not been able to draw a paycheck in over a year and would never have been able to support my love without the support of others. 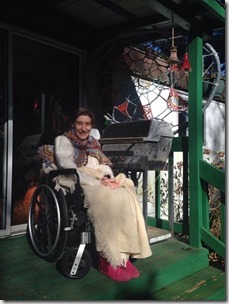 It has been an incredible year to withdraw from work.  While I have been saving my lover’s life with cannabis resins, we have helped make those very medicines legal for the first time in modern Canadian history in a unanimous decision by the highest court in the land.  Gayle was one of the four women that testified in that case, though she had barely recovered from her first surgery, and we were so scared she would never get to see the final outcome.

Then last month a federal government gets elected after promising to legalize cannabis.  While there are a multitude of issue to work out, it is a huge change from the draconian Harper mob that seemed entrenched.  Cannabis might not be for sale in stores yet, but it is amazing to feel this bitter uncivil drug war against the herb is ending internationally, with Canada in the lead.

There is no doubt that memories of Gayle Quin will remain etched into the souls of many individuals for a long time.  Her passion for healing others with natural medicines was infectious.  Her talent of developing formulas of herbal medicines helped many recover from surgery, if she did not help them avoid it entirely in the first place.  Constantly trying to share her knowledge and learn more, Gayle showed others during her entire life how to live life to the fullest by giving to others in need.

Indeed, one of our favourite things to do when we ran the club was invent new edible and topical products.  We had a few basic products when she joined in 2003, like Ryanol caps, Budda balls, salve, massage oil and, of course, cookies.  Over time she helped us add a number of topical products including cannapatches, massage oils with St Johns Wort, arnica, comfrey, canfor and mint, salves including one with aloe and another with a mixture of essential oils that we call Green Lion Salve.  She helped us expand our edible line, putting products cooked with bud on the menu and a few other food items we have experimented with.

To honor the work Gayle Quin has done for the VCBC, the board of directors decided to name the clubs product line after her.  It is humbling to know that patients could be using products named after her for a very, very long time.  Hopefully the VCBC will be able to help supply many more other dispensaries soon, selling Gayle Quin Medicine Woman products from coast to coast one day.

This is a legacy that few will ever be able to achieve.  Changing federal laws, developing innovative cannabis products, saving lives and touching hearts, Gayle Quin has been an incredible beacon of light, love and laughter.  Every day that we get to share of her life is a blessing to those able to be near her.

(Owen Smith and Kirk Tousaw at the Victoria Courthouse) By Dean Schwind It is not often that I send out a plea for money for someone other than myself, but I’m nothing if not an adventurous soul, so I thought I’d take a wack at it.  Now, be prepared my lovely Digest readers because I’m […]

Thurs Jan 30, 2020 For Immediate Release Victoria, B.C.: In an unprecedented move to protect a compassion club, Victoria city council voted unanimously to request the BC Cabinet to grant an exemption to the Victoria Cannabis Buyers Club on January 9, 2020.  After being raided by the Community Safety Unit on Nov 14, 2019, the […]