From the tender age of 13, Gayle Quin was destined to be a cannabis activist.

It began in 1970.  Her mom threw out plants she found in the house. Gayle defiantly picked the plants up and replanted them near her home.

There was a very good reason she has fought so hard for this plant.  She would not be alive without it.

Her first period was so severe she was in bed for days until her sister smoked her some hash.  That changed everything.  What was a party drug to everyone else became the difference between lying in bed and enjoying life.

Tracing back through Gayle’s medical history we see she has struggled with a multitude of problems.  Mercury poisoning from dental work compromised her immune system.  Fibromyalgia, chronic fatigue syndrome and arthritis have plagued her over the years, along with knees smashed in a car accident as a teenager.  Getting Hep C from her husband in the 1980s made matters worse.

Taking prescription drugs has not worked very well, usually causing very adverse negative side-effects .   That is why she turned to herbs and foods as medicine.  Through trial and error, Gayle has managed to help herself with various medical issues by using simple herbal teas, salves, and other preparations.

She joined the Victoria Cannabis Buyers Club in the summer of 2003, homeless and finally free from a terrible ex-husband.  Spending time in the club’s small smoking room, Gayle quickly got to know the members and staff. It was not long before she started working at the front desk of the club.

The help could not have come at a better time. The VCBC had barely survived police raids in Jan, March, June 2002 and Feb 2003. The debts were piling up.  It was hard to find good help with all of the cops, robbers, scammers, leeches and very sick people that were constantly coming at me. To make matter worse, the stress was causing my girlfriend at the time to fall apart.

At a meeting held for volunteers, Gayle suggested we start a newsletter. With so many court cases pending, new Health Canada regulations, scientific discoveries, medical cannabis dispensary activities, political developments and events to report upon, it was definitely needed to help the VCBC grow. However, it was decided that the publication should be done by the International Hempology 101 Society, as it fit the mandate of that group more than the dispensary. The Cannabis Digest was born in 2003.

All of those trials were held in 2004-05 and Gayle attended court more than anyone. She testified, sat quietly listening and encouraged others to attend at every opportunity, even taking her lunch break to go to court if she had to work. In the end, the club beat every single charge laid against the staff or members. My debt load was slightly less than $100,000, but by the end of 2005 our legal troubles were dealt with and everything seemed to be going well.

Everything except for my life at home. My girlfriend was losing it. The strain of my work had taken its toll upon her. Though we had been together for almost 10 years, our relationship was draining me. I was thin, pale and rarely laughed or smiled.

Meanwhile, Gayle had finally got her divorce money and wanted to buy a home. My girlfriend and I needed to find a place to live. Gayle bought a property with 2 homes, a house trailer and an old cabin that needed lots of work. Instead of embracing this opportunity, my girlfriend soon refused to live there.

Things only got worse. At the 10th anniversary party of the VCBC, I thanked Gayle for making everyone a cake before I thanked my girlfriend and others for helping me. I was told that meant I loved Gayle more.

There is nothing like having an affair with one of your managers in a medical cannabis dispensary. There was a bond between us that went far beyond a physical attraction. We would laugh and play around in the club, trying to bring a smile to  the patients. Sharing the love was part of our job, our life. Others were left to marvel at the magic we created.

Nevertheless, it was very intense leaving my now ex-girlfriend. Our 10 year relationship had sucked the life out of me and her threats of suicide were unbearable. In many ways, Gayle saved my life. We started working 6 days a week to get the club fully functioning.

Empowered by her relationship with me, Gayle took on the bakery. Though she never had a regular shift in the kitchen, it was in our home so she was always there cleaning and organizing things for the bakers. Gayle developed a number of new edible and topical products.

One of the members of the club, Sally, started getting severe burns all over her body from the radiation she was taking for cancer.  Gayle developed a salve using aloe that helped stop the burns from getting out of control and got the skin to look beautiful after it was all over. She helped us make massage oils with arnica, St John’s wort, comfrey, wild yam oil, mint, and camphor. The arnica/cannabis oil combination in particular works very well for swelling and inflammation, having helped a few people avoid surgery in their elbow, shoulder and knees.

The bakery got so busy that we decided it needed a new location so we got an apartment downtown in Gayle’s name. Our head baker, Owen Smith, really like to play his electronic music loud when he worked alone, something that really bugged the little old lady next door. Someone down the hallway cooking hash oil with smelly solvents was all the manager needed to call the police.

In many ways, though, that arrest is a blessing in disguise ,as this case is going to the Supreme Court of Canada while this article is going to print. Gayle was one of 4 women who testified in defense of Owen, citing her various reasons for using cannabis extracts for her aches and pains. This is the first medical cannabis case ever going before the Supreme Court of Canada and it is only fitting that she is one of the witnesses that testified.

But it is not all good news.

In the summer of 2011, Gayle had her right breast and part of her armpit removed with cancer. Though it was not present for a couple of years, in the fall of 2013 she had another lump removed. The cancer has now spread into her bones throughout her body.

Just after the court decision came down in 2012, my book, HEMPOLOGY 101: THE HISTORY AND USES OF CANNABIS SATIVA was finally published, thanks entirely to a loan from Gayle and her inheritance. We began to travel, going to conferences and hosting Hempology 101 conventions across eastern Canada. Her inheritance also allowed us to go to Jamaica and to go to the 1st Skunk sponsored Canadian activist getaway, meeting John and hanging out with some of the countries finest activists. It was the most incredible two weeks of our lives.

On Nov 1, 2014, Gayle’s back collapsed, the cancer having eaten 1/3rd of two vertebrate. After less than two weeks in the hospital, she was brought home to Cobble Hill where she has been in my care. They assumed she would die soon, as the cancer seemed to be aggressive and the medical system is only able to give her drugs to help with the pain.

Of course, Gayle has been eating cannabis almost her whole life and when the cancer appeared she started eating even more. While we know cannabis can help fight cancer, it did not seem to be enough.

When she was in the hospital unable to eat, we started giving her cannabis suppositories. They had an immediate and obvious positive impact. As soon as she could eat we started feeding her as many capsules full of cannabis extracts and hash that she could get down. Since getting home, she has been receiving donations of extracts and hash from many people. She would not be alive without it.

It has been over three months since they sent her home to die but all of the medicine and treatments have helped her tremendously. While she cannot walk yet, she can get into a wheelchair and seems to be slowly improving. We can only hope and pray that she continues to regain her strength.

Whether she was protesting downtown with a plant in her hand, helping an old lady learn how to apply cannabis oils, making a costume to wear, cleaning the kitchen or writing for the newspaper, Gayle Quin has truly shown others how to live with passion and grace. Her relentless drive to help strangers and friends alike has been a shining example to others. The cannabis community has truly become more rich and colourful from her divine presence. 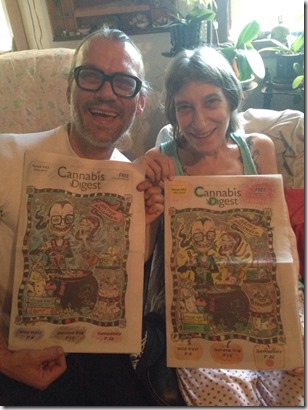