Deprecated: The $control_id argument is deprecated since version 3.5.0! in /home/oq5ayjaeetjt/public_html/wp-content/plugins/elementor/modules/dev-tools/deprecation.php on line 304
 Advertising Marijuana Part I:  Medicine Heals The Ailing Press  - Cannabis Digest
Skip to content 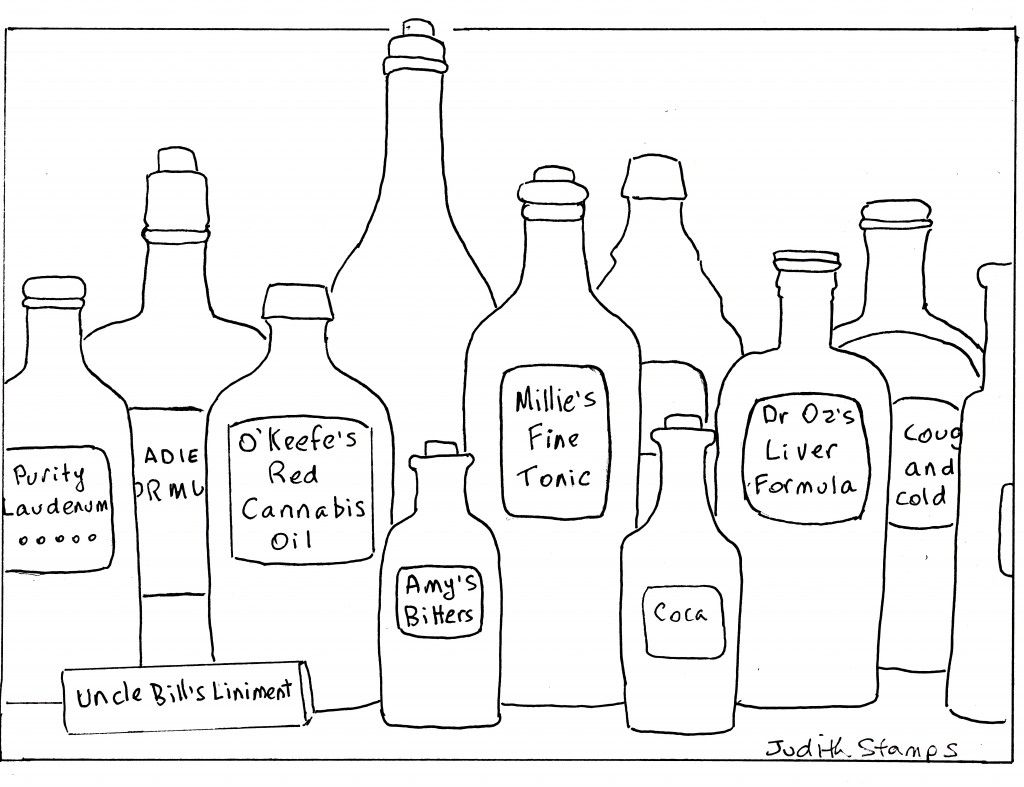 Wherever medical marijuana has taken root, officially speaking, ads for the plant have been bringing new life to newspapers.1 The Colorado Springs Independent (CSI) has recently put out a 48-page medical marijuana ad supplement, featuring retailers like  “Mile High Mikes,” “Happy Buddha,” and “Healthy Connections.” Village Voice Media now issues two advertising supplements: the “Chronic-le” in Denver, and “The Rolling Paper” in San Francisco and Orange County.  The Denver Post is doing well.   So are others.  The new ads are not restricted to marijuana.  There are spin-off advertisments for tax and business lawyers, builders, real estate agents, and security services.  CBS has called the phenomenon a new “cash crop” for the press.  No kidding.  Each full-page ad costs $1,100.  The CSI has recently hired a new full time reporter and promoted three part-time reporters to full-time positions.   They’ve also hired a dedicated marijuana reporter.  This may turn out to be more than a cash crop.  It may become a renaissance.

The ad campaigns come in the wake of Obama’s 2008 decision, as everyone says, to “call off the dogs.”  The DEA has ceased to harass states wishing to create their own marijuana policy.  But while federal policy has opened the door to canna-business plus ads, it is the states’ rules that have sent the message to the favoured medium.  Post legalization, advertising rules remain stringent.  There can be no billboards, handbills on windshields, or other public signage.  There are to be no posts on media where the viewers are likely to be under age.  Colorado, for example, has a 30% rule.  No more than 30% of viewers or readers of a medium featuring cannabis can be minors.  This rule has had the unintended effect of handing the ad business to the newspapers.  Minors just don’t read them.  They never have.  If ever the press has shed tears over this fact, it won’t be shedding them any more.  For decades now newspapers have been starved for advertising revenue, much of it lost to the Internet.   This shift in fortunes has taken many by surprise.  “Few predicted,” states the New York Times, “that [these ads] would be such a boon for local newspapers.”

But if the shift was not predictable, it is in many ways fitting.   Advertisements for home-style medicines have long been associated with the popular press.  They grew up together.  The first English newspaper ads were for Anderson’s Pills in 1630, and Tea, long considered a tonic, in 1652.   Indeed, home-style style medicines, called patent medicines, fuelled the early press, sustaining it from its birth in the seventeenth century to well into the early twentieth.  For publications that served North Americans in the nineteenth century, advertisements for pills, potions and tonics were essential.  In aggregate, they accounted for more than all the other ads put together.  They also accounted for thirty to fifty per cent of a papers’ income.  Gannett Publications, established in 1866, owes its origins to them.  Gannett currently owns 90 daily papers, 1,000 weeklies, and 30 television stations throughout the US and six other countries including the UK.  Now that’s good medicine!

Patent medicines had no patents.  They were the trademarked preparations that served most North American households well into the 1920s.  Some were extravagantly advertised; some more plainly.  Some did little; some were effective.  Most contained alcohol, opium, cocaine, cannabis, or some combination thereof, along with herbs long known for salutary effects.  They were the organized version of granny’s medicine cabinet.  In the colonial era, they saved lives.  They cheered the weary and brought sleep to the anxious.  They calmed dysentery long enough to allow recovery from influenzas.  They suppressed coughs long enough to allow recovery from bronchitis.   They fitted the order of the day.  They aided survival. 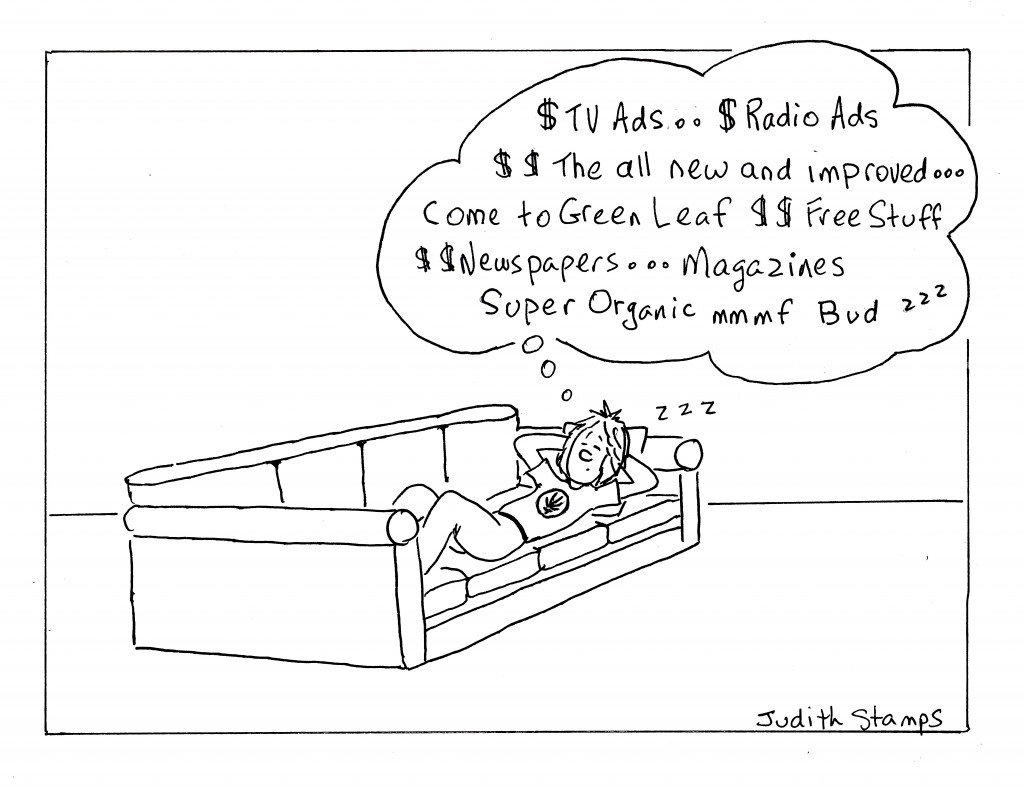 Besides, nineteenth century North America was hardly awash with physicians.  Canada of 1881 had one for every 1, 249 persons; in the US, the figure was around one per 600.2  Most of these were in or close to the cities.  It was normal, thus, for people to be their own physicians.  Moreover, many were suspicious of new and invasive medical techniques.  Many mistrusted doctors.  They followed instead, an ethic of self-healing and more generally, of self-reliance.  These values link Cannabis fans today to their nineteenth and early twentieth century counterparts. They provide a point of kinship.  If medical cannabis has begun to breathe new life into the ailing newspaper industry, then truly it has returned to one of its ancestral homes.

Patent medicine advertisers did more than support the budding press.  They invented the advertising techniques we’ve come to know and love.   A leading figure was P. T. Barnum.  Barnum was a publisher and trail blazing ad man.   He pioneered the use of imaginative posters and handbills; of testimonials; of celebrity endorsements; and of wild, imaginative typography.  A compatriot, Dr. James C. Ayer, invented the saturation campaign.  In the 1840s, he ran his ad for Cherry Pectoral in all 2,000 of America’s newspapers.  The press sopped it up.  In 1847 those 2,000 papers ran 11,000,000 patent medicine ads.  Yes, eleven million.  Then there are the advertising supplements.  Medicine makers created them.  They published calendars.  They produced the almanacs, wildly popular and free of charge in pharmacies and other retail establishments.   Pick up a Farmer’s Almanac this fall and you will see these spiritual roots in action: ads for herbal medicines and other home cures, traditional recipes, and ten ways to avoid your doctor.  Patent medicine makers also established early databases.  They solicited letters of endorsement, pooled them, and sold them to other advertisers.  In due time they pushed this process to the point of reversal, and published items such as The Ladies Home Companion.   The Home Companion is an advertising rag with a bit of news added for interest.

By 1870, pharmacists had formed professional associations, and had begun their campaign to engineer the home remedy’s demise.  They lobbied elected officials, wrote scathing ‘scientific’ papers and called on houses of elected representatives to pass anti home remedy legislation.  Until the 1920s they didn’t get far.  The newspapers were a powerful lobby.  Besides, it was argued, the medicines were popular.  People liked them and most believed that they benefitted from them.  Sound familiar?

It should.  Only the arguments are now a century louder.  Post prohibition—almost—press advertisers are lining up once again to take the reins.  Thus far, they’ve taken off in a couple of directions.  I thought I’d end this discussion by looking briefly at two current ad styles:  one reserved and classy; the other, decidedly dollar store.  In August 2014, New York became the 23rd state to legalize medical cannabis.  In honour of the event, and to bolster its own image, Privateer Holdings’ website, Leafly.com, took out a full-page ad in the New York Times.3 The ad features two slender, fit looking young adults:  Ian, who uses an Indica for his MS, and Molly, who has chosen a Sativa for her cancer.   Ian and Molly are well dressed, affluent and look like professionals.  Ian is standing at the door of a really expensive town house.  Molly is on an exercise run.  There’s a bit of nonsense here, of course.   MS sufferers are not all wealthy and you’re unlikely to meet a cancer patient who looks so much like a triathlete.   But the ad is effective.  It makes good use of DrugSense’s slogan: Just Say Know.  And it makes this point:  There is such a thing as medical marijuana, and the people who use it look much like your neighbours.

Then there are mass ads.  Mental Floss Magazine’s David K. Israel has provided us with a small collection of what you might find in the new multi-page ad supplements.4   These are charming.  We have the Discount Center.  First time patients receive a free lighter, blunt wrap, and edible.  We get Medical Marijuana Evaluations; Fast and simple; Bullet Proof Verification.  Huh?  “Bullet Proof!?”  We meet the winking smiley face that welcomes walk-ins, promises no hassles and offers 10% off for new patients.  I guess you can make the rounds of the shops until you have used up all the freebies.  These print ads are all green.  Actually, they feature a bit of red.   I think it’s the “green rush” with a sprinkle of Christmas.  There’s a bit of nonsense here too.  But who cares?  We’ll probably love it.

Let’s not love it enough, though, to get terribly whipped up about the ads.  This side of prohibition we ought to see that marijuana has gotten along very well without them.  From what I can see, their long absence has suppressed neither quality nor supply.  High Times Magazine and media representatives in Colorado and elsewhere are fighting to ease restrictions in all media.5   Of course, they should.  On the other hand, there is something to be said for sitting back and watching the current ads provide sustenance to the press.  The plant remedy is real; the newspaper, useful; and the ads?They contain their share of bullshit, but they entertain and they also educate.  The newspaper was our first mass medium, and cannabis, one of the first remedies that gave it life.  If the remedy has come full circle, so be it.  Welcome Home, Medical Marijuana.

One of the medical cannabis products I was making when arrested in 2009 was the V-CBC’s ‘Ganja Goji’ Lozenges. The result of my arrest was the launch of a (so far successful) constitutional challenge that has removed the prohibition on extracted cannabis products for thousands of ill Canadians. The benefits of sucking on a cannabis […]