Deprecated: The $control_id argument is deprecated since version 3.5.0! in /home/oq5ayjaeetjt/public_html/wp-content/plugins/elementor/modules/dev-tools/deprecation.php on line 304
 High Court Heroics - Cannabis Digest
Skip to content 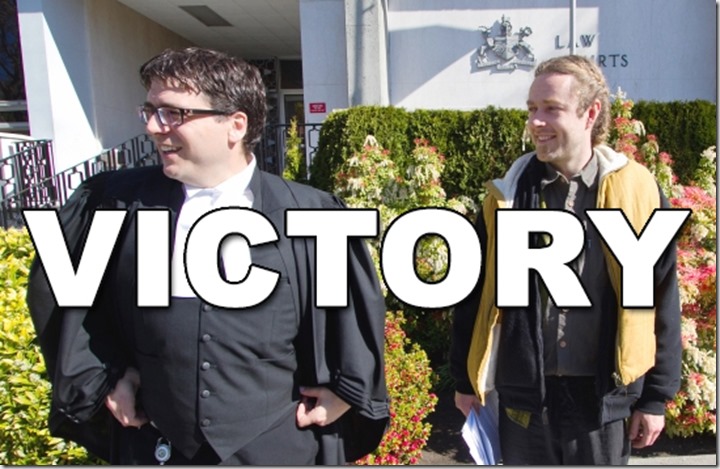 (editors note: Health Canada has since made a response to the Smith ruling, read about it HERE)

Cries of relief and outrage could be heard across Canada early in the morning, last June 11.  Tears of joy streamed down many faces as news spread about another blow to cannabis prohibition, though not everyone joined the celebrations.

A humbled Owen Smith proudly spoke of a new era in cannabis medicines, “Ìt is a profound honour to be the person standing at the center of a very important case.”

In an unanimous decision handed down June 11, 2015, the Supreme Court of Canada ruled that the federal government had violated the constitutional rights of patients by allowing them access to raw, dried cannabis, but prohibiting them from extracting the resins or making other derivatives.  The implications are huge.  Huge.

Instead of accepting defeat, federal Minister responsible for Health Canada, Rona Ambrose expressed her outrage at the courts and vowed to she would never say cannabis was a medicine.  Her attacks were aimed at the court for undermining the drug approval process and for making cannabis more acceptable.  It is clear the Conservatives are waging a war against the cannabis culture, with patients easily caught in the crossfire.

“Never in the history of Canada has a drug become a medicine because judges deemed it so.  There is a regulatory approval process… with clinical evidence and safely reviews so that we can protect the health of Canadians.”  Admitting patients are being used as pawns in a larger political strategy, Ambrose declared, “We will continue to fight against… this kind of message.  As I have said repeatedly, this is part of a larger issue.  We have to continue to get the message out that it is not a drug.”

Effective immediately, this decision has created chaos for the rulers of Health Canada on several fronts.  Patients can now possess cannabis derivatives without fear of the law, but there is no where for them to purchase those products legally.  The medical professional is unprepared to handle cannabis derivatives, yet they embrace the opportunity to use it in forms other than smoked or vaporized.  Licensed Producers are screaming for authorization to sell these new products, while the pharmaceutical industry has felt a cold chill run through its accounting department.

According to Ambrose, the federal government wants to fight this decision by the Supreme Court of Canada, though how they plan upon doing that is unclear.  They cannot fight in court anymore, at least not in this case.  Lower courts will not overturn such a strong decision from the highest court in the country.  It will be a long time before they get a judge to reconsider the issue of extracts for patients, if ever.

Many are frustrated the judges did not give clear instructions to fix the problem but there are a few reasons why the courts have been limited in their decision.  First, Owen was charged when the Medical Marijuana Access Program was in effect, not the current Marijuana for Medical Purposes Regulations, so there was no evidence provided about LPs provided to the court until late into the proceedings.  In the decision the judges strike down two sections of the Controlled Drugs and Substances Act without mentioning either regulations, sending a strong message that no matter what medical program is in effect, patients have the right to cannabis extracts.

Secondly, Owen was charged with possession of cannabis and possession for the purposes of trafficking THC, but not production, even though he was caught baking cookies, and a fridge full of cannabis-infused vegetable oils.  While the courts saw fit to expand their decisions from the charge of THC to include all derivatives, they did not include production when they struck down sections of the CDSA as unconstitutional.  This creates a legal lacuna, and it is not the first time something like this has happened to cannabis prohibition.

When the Parker decision was handed down by the Ontario Court of Appeal in 2000, the courts did not force the government to supply cannabis.  Instead of allowing Prairie Plant Systems to sell what they were growing in a mine for research, Health Canada created a program which allowed patients, or a designated caregiver, to grow their own medicine.  In Oct 2003, in the Hitzig ruling, that scenario was struck down as unconstitutional and the government was told they needed to find a means for patients to purchase cannabis for medical purposes.

Soon after, courts began to throw out possession charges, stating that as long as the federal government fails to provide a legal source of cannabis the law is unconstitutional and no one can be convicted of simple possession.  Seizing the moment, Marc Emery did the cross Canada tour Summer of Legalization in 2004, smoking cannabis in front of a police station in every province of the country to prove the law was not in full force and effect.  He and his bong were only arrested at about one half of the police stations.  All of the charges were eventually thrown out with around 4,000 other possession charges that year.

Late in the summer of 2004, Health Canada began to allow PPS to ship its cannabis to patients, sealing the lacuna.  In the meantime, charges against myself and others arrested in compassion club raids before the breach was fixed were dropped, as were other charges against growers supplying these organizations.  A decade later Health Canada scrapped the MMAR entirely, as court challenge after court challenge exposed its weaknesses and patients started accessing the program in larger numbers than the government had considered when the program started.

Now we can expect a similar situation.  It is just a matter of time before someone charged with production of a cannabis derivative convinces a judge that the law is unconstitutional, simply by referring to the Smith decision, and pointing out that the government has not fixed the production problem.  This will expose the lacuna, proving the government has no authority to prosecute anyone for any cannabis derivative offence until such time as there are legal means for patients to purchase them from Licensed Producers.

At that point the Conservatives are likely to consider crafting new regulations to tightly control the production of extracts, but they will not likely budge until they appear to have no authority to convict anyone with these laws.  Despite pressure from the courts, patients, Licensed Producers, medical professionals and the public, the federal government appears to be on a crusade against cannabis that defies logic.  We can only hope they get kicked out of office soon so a new direction can take root in the medical cannabis programs.

Crown Prosecutor Paul Riley in his arguments before the Supreme Court of Canada went so far as to say that the courts were creating a fourth new path to get a drug on the market.  Calling it an extra-regulatory means to sell a drug, Riley and Ambrose have expressed frustration with the judiciary for considering evidence about the benefits of cannabis to be substantial enough to warrant dismantling the laws.  This is the first time the courts have stopped the government from creating a blanket prohibition on a drug or plant, first with cannabis and now its derivatives, and those interested in maintaining the drug war are not happy.

Defense lawyer Kirk Tousaw, who was brilliant in both his written and oral arguments, attempted to have the high court strike cannabis out of the CDSA entirely, forcing the government to control its sale with the Natural Health Products Act.  While this is ultimately the most intelligent direction for the government to go, the court did not see fit to go that far, instead immediately striking down the law to protect patients but not meddling in the policy decisions of government.  We can only hope the next political party in charge does it without being forced by the courts.

Tousaw`s reaction to the statement`s made by Ambrose were eloquent.  “[She] is busy blaming the courts when she should really be looking at her own office instead of vitriolically condemning a unanimous Supreme Court of Canada decision with a bunch of justices that her boss [Stephen Harper] appointed to that court.  Maybe she should go back to the drawing board, listen to patients for a change, and come up with a system that is going to work.”

For now, the only viable source for cannabis extracts, for patients unable to make their own, are dispensaries like the Victoria Cannabis Buyers Club.  It is sad to note that while the Vancouver city council is citing the Smith decision as one of the justifications for licensing dispensaries, the regulations will not allow mail order across the country, due to some jurisdictional issues.  If Victoria and other city councils considering licensing dispensaries all draft the same by-laws, then patients living outside of large urban centers may be left with few options for derivatives except internet sites.

Lawyer John Conroy, lead counsel in the Allard case, may help push the government towards creating regulations for the distribution of cannabis derivatives.  However, it will be years before a final decision is made in that matter, and if the Conservatives retain office this fall, they will likely appeal until they can fight in court no more.  Given the contempt the Conservative government seems to have towards the courts, it is difficult to imagine they would do anything reasonable in this portfolio.

With this historical victory, a great blow has been struck to the Achilles Heel of cannabis prohibition.  Though the war wages on, one can sense the growing frustration of the Conservatives and their prohibitionist friends as more citizens join the chorus for sane drug policies.  Owen Smith and Kirk Tousaw will be known in history for changing the most backwards laws this country has ever seen.

Debra Harper “A significant percentage of patients (42%) reported accessing cannabis from illegal/unregulated sources in addition to access via LPs, and over half (55%) were charged money to receive a medical recommendation to use cannabis, with nearly 25% paying $300 or more.” International Journal of Drug Policy We hear how well Licensed Producers (LP’s) are […]

Lisa Mamakind Kirkman’s Battles in the Badlands of Alberta By Dean Schwind If you think this story is about the famous sexpot goddess, activist, writer, caregiver, overgrower, and icon in the war to free the weed, Mamakind, you’re wrong.  This is about Lisa Kirkman, a woman, a mom, a partner, and a patient who is […]