Deprecated: The $control_id argument is deprecated since version 3.5.0! in /home/oq5ayjaeetjt/public_html/wp-content/plugins/elementor/modules/dev-tools/deprecation.php on line 304
 Rasta and High Times: The Jamaican World Cannabis Cup - Cannabis Digest
Skip to content

Since the passing of the Ganja Bill in Jamaica new opportunities are being embarked upon by ganja farmers and leaders of the Rastafari community. Recently, an elder from the Nyahbinghi Mansion who is the Chairman of the Westmoreland Hemp and Ganja Farmers Association is Chairing both the Rastafari In Inity (a new community based organization) and the Rastafari Rootz Fest, which together will be hosting Jamaica’s first World Cannabis Cup in association with High Times. According to the Chair, Ras Iyah V, during a recent press release held at the University of the West Indies on the 22nd of September, “the Rastafari Rootz Fest is already seeking to become an annual event just like the Jazz Fest and Sun Fest”. As a licensed event, Ras Iyah V pointed out that unlike other fests in Jamaica the Rastafari Roots Fest will be the first national event that is actually owned by the Rastafari community. In his press release statement Ras Iyah V also highlighted how pertinent it was for the Rastafari community to establish a better economic base or foundation in order to fulfill community goals and ideas. 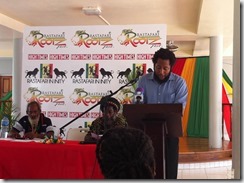 Although High Times will definitely be keeping its cannabis cup in Jamaica especially since the green light has already been given, there are some concerns. Some of these concerns are actually coming from out of the international ganja community and relates to how Jamaica and the Jamaican traditional farmers will benefit from such an event. One concern that a Canadian friend of mine has is that many of the grass root farmers who really grow the organic high grade ganja (some of whom he personally knows) will not have the opportunity to enter the cup because they don’t even know about it, nor are they a part of any ganja parish association! Other concerns are with the lack of international promotion of the event of which High Times is responsible for. Such concerns are relevant and do certainly speak to the lack of local and international promotion of Jamaica’s first cannabis cup hosted by Rastafari Rootz Fest.

Additionally there are some concerns pertaining to sponsorship as there seem to be little financial support given to both High Times and the Rastafari Rootz Fest. One other person even declared to me that their $25,000 Canadian as possible sponsorship money for the cannabis cup was totally ignored by High Times. But what is interesting is that during a recent conversation in Negril with a representative from High Times I remember that representative stating how the budget for the Jamaica World Cannabis Cup was such a “low budget”. I also remember Ras Iyah V mentioning how none of the possible local sponsors have come on board yet. Unfortunately there is a clear and close relationship between the lack of promotion of the Jamaica World Cannabis Cup, both at the national and international level, and lack of sponsorship! Hopefully more information from the press release will become quickly available to the regional and international community. 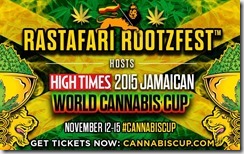 So how can one enter the Jamaica World Cannabis Cup? This is a question that many have been asking for months now without much of an answer from organizers. However, it is very unfortunate that not much can be done in Jamaica without the highest levels of bureaucracy. In terms of the prerequisite for entry to the cannabis cup Rastafari attorney-at-law Marcus Goffe noted that anyone wishing to enter the Jamaica World Cannabis Cup must have been a Jamaican resident for at least five years. Furthermore such proof of residence must be proven with a utility bill, etc. In further laying down some ground rules Goffe stated how Jamaican farmers must enter the cannabis cup through their local parish ganja associations or through the various Rastafari Mansions and Organizations. An option is also available for those farmers who have not yet joined ganja parish associations under non-territorial claims. With reference to the different competitions there will only be four categories. These four categories are sativa, indica, hybrid and hash (including oils).

Since the press release another back lash is already coming from grass root farmers in Jamaica who would like to enter the cannabis cup but who does not want their true identity or their residence known. Perhaps these are unlicensed ganja farmers who really grow abundantly for commercial purposes and who would like their legal names and residence to remain unknown for practical reasons. Yet, these are expert ganja farmers in Jamaica who can potentially bring a higher grade ganja to the cup and thus making the cup more interesting and more worth it. What is a High Times ganja cup without high grade ganja?

For further information about the Jamaica World Cannabis Cup held in Negril please visit the High Times website at www.hightimes.com. To help with local sponsorship please contact Chairman of Rastafari In Inity (Rastafari Rootz Fest) Ras Iyah V at: 1-876-404-9776 or 1-876-799-7577

Check out this beautiful artwork depicting Cannabis across Canada for the Cover of Summer Issue #53 by the talented Carly Neigum. Find a copy of the Summer print edition in a cannabis friendly business near you!

We are experiencing a historic moment, one much bigger than most people realize. Legalizing cannabis will not change the world overnight, but with the flick of a switch we are turning on the most potent plant this world has to offer. If you are tuned into the vibe, it is electric, vibrant and ready to […]