What is the RvSmith Extract Trial?

(Cannabis products from the V-CBC)

My name is Owen Smith and I am responsible for the constitutional challenge that would allow medical patients access to cannabis derivatives in Canada. Referred to as the Extract Trial, or the Cookie Case, mine will be the first medical cannabis case to ever be seen by the country’s highest court.  There are many details from deeply personal to purely legal that have combined to create this so far successful challenge. The outcome could create a profound new landscape for medical cannabis patients and their providers to explore.

In the next few blogs i will cover it more in depth, but first I will give you a brief overview. The Medical Marihuana Access Regulations, now the Marihuana for Medical Purposes Regulations, restrict authorized individuals to the possession of “dried marihuana” only. Dried Marihuana refers to the inert fibrous plant material as well as the medicinal resin produced in trichome heads on the surface of that material. The law that governs cannabis divides it into various categories distinguishing dried marihuana from resin, THC, CBD and CBN respectively. I was charged with trafficking THC.

While most cannabis use involves simply crushing and inhaling these flowers; medical patients have a diverse set of needs. By submerging the plant material in vegetable oil (or a cup of tea), the fat soluble resin will separate from the plant and dissolve into the liquid. It is only when you remove the plant material (in the tea bag) from the oil have you broken the law by creating THC. In 2009 I was arrested with a variety of infused vegetable oils for edible and topical use by members of the V-CBC. 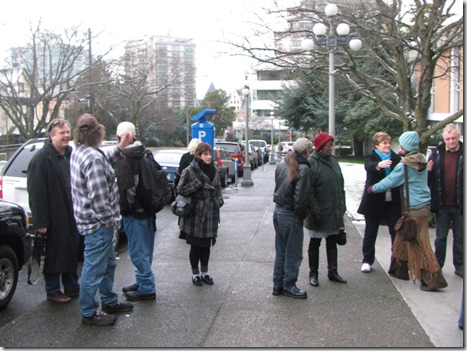 Before I could be tried personally, we would have a trial to decide whether or not the law is indeed unconstitutional and without good reason. We brought a botanical scientist to court as our expert witness to highlight this categorical error. Dr. David Pate confirmed that the THC containing resin separates so easily as to be incidental. He also explained that because THC and all the other cannabinoids are produced externally, the bulk of the plant is unnecessary and potentially detrimental to medical patients.

Dr. Pates testimony made up a great deal of the excepted fact in BC Supreme Court Judge Johnston’s decision. Patients in BC were instantly protected to make their own cannabis oils (or tea) without fear of prosecution. BC’s chief medical officer Perry Kendall announced that “By consuming cannabis in these ways, patients are able to avoid the negative health effects of smoking, which we know to be harmful to the lungs.”

However, the judge did not throw out the charges against me, opening up the potential for another trial—this time with a jury. We prepared for the jury trial for 9 months before the crown decided to abort, calling no evidence, allowing the judge to find me not guilty. The crown then appealed only on the basis that the judge had misinterpreted aspects of the law, they didn’t challenge the scientific facts.

The BC Court of Appeal listened to 1 day of arguments and nine months later delivered a 2-1 verdict in our favour. The presence of a dissenting judge gave the governments final appeal automatic entrance to the Supreme Court of Canada. On march 20th 2015 our team will be in Ottawa to present this case to Canada’s highest court.

We are asking for support with some of the costs, CLICK HERE to help