Deprecated: The $control_id argument is deprecated since version 3.5.0! in /home/oq5ayjaeetjt/public_html/wp-content/plugins/elementor/modules/dev-tools/deprecation.php on line 304
 Bulletin 404 - Cannabis Digest
Skip to content 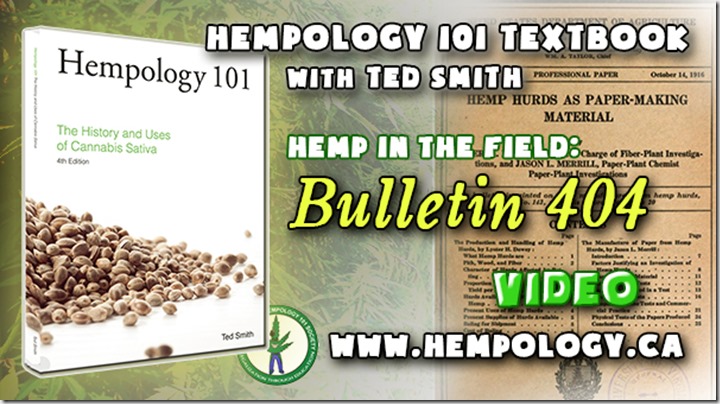 While paper has historically been made out of hemp, it was not until 1916 that a method was devised that turned the inner cork into paper, making much more profitable for farmers to grow it almost overnight.  The Department of Agriculture release Bulletin #404 that year, expecting this announcement to generate a flurry of investment in hemp paper production.   Alas, this new development ultimately was never fully exploited as this actually created many new competitors of hemp, ultimately leading to its prohibition.

When the Chinese created hemp paper thousands of years ago they used the long, strong fibers to form thin sheets of paper.  The inner cork, or hurds, were a waste product, not used for much more than stable bedding.  That is until Bulletin #404 was released. Hemp hurd paper was easy to produce, using far less chemicals than wood pulp paper.

Under the direction of visionary Lyster Dewey, the US Department of Agriculture was heavily promoting the development of the hemp industry in the early 1900’s.  Bulletin #404 is reprinted in the ground-breaking book, THE EMPEROR WEARS NO CLOTHES, which exposed the reefer madness conspiracy in the 1980’s.  Much of what is known about hemp today would have been buried in history without this amazing document.

For the complete history of cannabis, you should buy HEMPOLOGY 101: THE HISTORY AND USES OF CANNABIS SATIVA.  Of course, you could just slowly watch these videos we are releasing that slowly explain what is in the book but you are better buying the book too because I could not possibly do a better job on video than I do in print.

Compassion Club Gets Eviction For Christmas

For Immediate Release Thursday December 22, 2022 Victoria, B.C.:  The oldest medical cannabis provider in Canada will be moving in the new year, after its new landlord gave the society an eviction notice, effective Jan 2, 2022, just before the Christmas break.  On December 14, lawyers for Bluebird Core Associates Inc. served the Victoria Cannabis […]