Medical Marijuana in the Maritimes 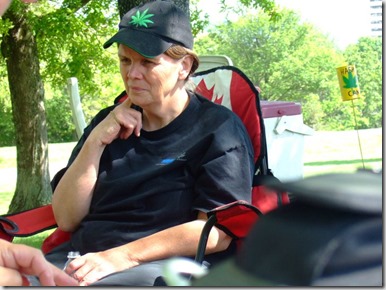 By Debbie Stultz-Giffin
Before I begin this article on the history of Maritimers Unite for Medical Marijuana Society (MUMM), I would like to thank Ted Smith for this opportunity to share some of what has and is happening on the East Coast medicinal cannabis front. I will tell you about myself and provide background information about MUMM <www.mumm.ca> and some of the many things that MUMM has been involved with.

I was diagnosed with MS in 1999, shortly after I suffered from overwhelming side effects of pharmaceuticals that quickly became no more than legal poison to my already battered system. In short order, cannabis was the only medicine that I could tolerate. In May, 2002, I issued a press release in Bridgetown, NS, announcing that I was part of a civil law suit taking the federal government to court due to the unconstitutional nature of the Marihuana Medical Access Regulations (MMAR). My husband, Cliff, was unable to apply to be my personal designated grower due a cultivation conviction from 1999, resulting from his growing my winter’s worth of medicine.

The MMAR provided exemptions from the law for approved medicinal users, but no legal source of therapeutic cannabis. The case involved Warren Hitzig, along with seven medical cannabis patients: Alison Myrden, Stephen Vandekemp, Marco Renda, Marylynne Chamney, Catherine Devries, Jari Dvorak, and myself (the only patient not from Ontario). Alan Young and Leora Shemish argued on our behalf that the MMAR provided an illusory access to cannabis for ill Canadians, and effectively encouraged patients to turn to the black market for their medication.

Ontario Superior Court Judge Sidney Lederman found that the constitutional rights of the applicants had been violated according to the Canadian Charter of Rights and Freedoms. The Canadian government was given six months from Jan. 9, 2003 to fix this atrocity.

This decision prompted Health Canada to announce on July 8, 2003, that distribution of the cannabis being grown under contract by Prairie Plant Systems in Flin Flon, Manitoba would begin once a few details had been resolved. Around the time that I was contemplating the above mentioned law suit, other activists were emerging. John Cook, MUMM’s Vice Chair and Director of the Cannabis Buyers’ Club of Canada – Halifax Outlet, held a press conference in Halifax, Feb. 21, 2002, announcing the spearheading of the Maritimes first compassion club to “come out of the closet.” John required a note from a patient’s doctor.

In 2005, RCMP confiscated a 500 gram package being shipped by his grower, Stephen Chute, on the Acadian Lines bus from Springhill to John in Halifax. Both face charges under the CDSA. John was set to argue that court decisions made in other provinces gave medical marijuana users across Canada the right to possess and cultivate their own cannabis without a federal permit, when the prosecutor stayed all charges without any explanation. Unfortunately, John has never gotten his day in court.

Chummy Anthony, a MUMM founding member and activist for the Marijuana Party of Canada, led a one man protest in front of a computer access site in Windsor, having been denied access just days before when he was researching medical cannabis to glean information to take to his physician. When the RCMP became involved Chummy declared that he was without an exemption, had a medical need, proceeded to consume cannabis on the spot, and was not arrested. 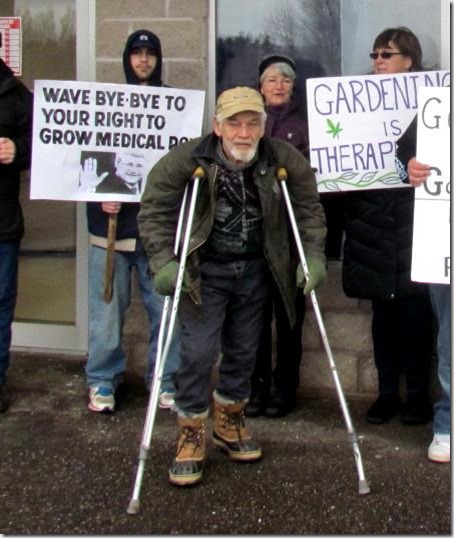 Feb. 21, 2003, MUMM hosted a Demand for Dignity Forum at the Universalist Unitarian Church in Halifax, highlighting the plight of medical cannabis patients. Senator Pierre Claude Nolin, our key note speaker, told the audience about the Senate Committee recommendations from the then freshly released Senate Committee Report recommending legalization of cannabis, legitimization of compassion clubs, and a complete revamping of the medical cannabis program. Several patients spoke about the abysmal failure of our federal government at meeting the needs of chronically ill Canadians.

As the six month deadline imposed by Lederman’s Decision loomed, a group of patients felt strongly that an official organization with objectives based on educational, advocacy, and lobbying principles, designed to assist patients and their medication suppliers, was long overdue in the Maritimes. On July 8, 2003, rallies occurred in Ottawa and Halifax calling for the resignation of the Hon. Anne MacLellan, the federal Health Minister. Patients were upset about the government’s inaction with making meaningful changes to the MMAR.

MUMM used this occasion to sign incorporation paperwork on Grand Parade Square, Halifax. The founding board of directors for Maritimers Unite for Medical Marijuana Society was John Cook, Frank (Chummy) Anthony, the late Jane Parker, Sally Campbell, Gordon Hume, and myself. MUMM was officially incorporated on Oct. 30, 2003 as a non-profit organization under the Nova Scotia Societies Act.
Our objectives were/are that:

1) MUMM would work to pressure Health Canada to ensure easier access to safe, legal, affordable cannabis for all who required medical cannabis.

3) MUMM would work proactively with regional grassroots activists and municipal, provincial, and federal politicians, institutions and agencies to protect the rights of patients who require cannabis for medical purposes, as well as those who risk prosecution by supplying them with their medication.

One of our founding members, Jane Parker, lived on a fixed income and often went without medical cannabis. In 2003, Jane applied to the Department of Community Services Income Assistance to have the costs of her cannabis covered like any prescription medication. Instead, she was offered an array of pharmaceuticals, including high doses of morphine (paid for by the Nova Scotia provincial government) to deal with the constant excruciating pain caused by the MS.

Two months prior to her death, and on the verge of bankruptcy, Jane’s health had deteriorated to the point that she had to be admitted to a nursing home. Sadly, the side effects of the pharmaceuticals were overwhelming and led to Jane’s premature death.

MUMM began holding regular membership meetings at the Hants Community Center in Windsor, NS, bringing together activists and patients from various parts of the province. A lifetime membership is a nominal, but not mandatory, fee of five dollars. As our membership began to grow, we offered a “super supporter” membership that included a MUMM t-shirt for $30.

In 2004, MUMM met with Dalhousie Legal Aid to explore the option of establishing a cooperative to provide medical grade cannabis to low-income Nova Scotians. Not only had Jane been seeking governmental assistance with the cost of cannabis, but Sally Campbell was also requesting similar coverage. Many other exemption holders were often being forced to choose between food and medicine. There was much interest on the part of exemption holders for this initiative, but the head of licensing for cooperatives, was not inclined to process any application that could not follow what he perceived the letter of the law to be at that time.

Having held a Hemp Festival at the Annapolis Valley Exhibition Grounds, Lawrencetown, Annapolis County, NS in July, 2004, attracting 200 people and 17 bands who donated their time and talent to our cause, we spent the following year raising funds to assist with expenses for our second hemp festival. The second annual Hemp Festival saw a swell in support. Approximately 400 people attended, with 26 bands and two out of province guest speakers set to take the stage. Marc Emery’s arrest at the request of the DEA for selling cannabis seeds to American citizens marked the start of the festival and Rick Reimer’s wrongful arrest for “public intoxication” concluded our weekend. Subsequently, the Village Commission of Lawrencetown demanded a series of meetings with the board of the Exhibition Grounds and the RCMP, resulting in the cancellation of the third annual hempfest.

Although able to meet most of the village’s expectations, MUMM was not willing to coral authorized medical patients into a tent to medicate. We were not in a position to deny the RCMP access to the grounds, but we were not willing to subject cannabis consumers who couldn’t access an exemption to potential arrest. MUMM has searched ever since to find a suitable location on private property to hold another festival. We have successfully held four annual Harvestfest’s on private property. In 2011, we arrived at our permanent location for both an annual Harvestfest at a rural location in NS, and home for a summertime weekend festival in 2012 featuring musicians, comedians, speakers, and vendors. Details will be evolving on our webpage and facebook group.

By 2005, the coordination of the Global Marijuana March, previously organized by Michael and Melanie Patriquen, had been passed along to MUMM to coordinate. MUMM have organized a global Marijuana Event every year since, until 2011 when Halifax Regional Municipality tried to extend the tobacco ban to include medicinal marijuana for that day only. This information was given to organizers at such a late date that the rally had to be postponed until 2012. In the interim, MUMM’s patient advocate, David Shea, has learned that the province’s smoking by laws trump municipal bylaws. Provincial bylaws do not include medical cannabis consumption. In 2012 MUMM will once again hold an event the first weekend in May to mark the global celebration demanding an end to cannabis prohibition. 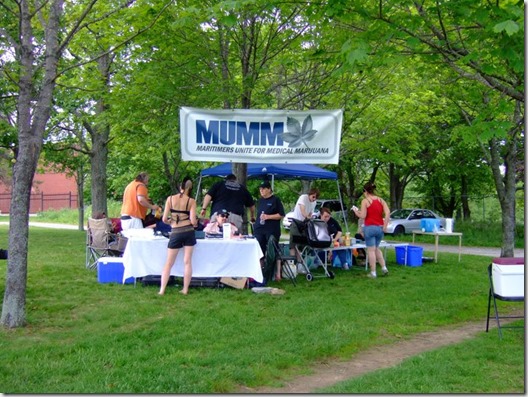 MUMM has also been the hosting group, since 2005, for the annual Cannabis Day Picnic held on the Dartmouth Commons—with 2012 being the 17th annual event! In 2007, MUMM decided to try to expand and attract new members was to host our meetings in Halifax. The first meeting was held at the Universalist Unitarian Church and consisted of the premier showing of Christian Laurette’s Run from the Cure (the Rick Simpson story). Most of the patients (including Simpson) featured in the DVD spoke and answered questions.

MUMM has since held many meetings in Halifax, including various educational components on topics of strain selection, cloning, benefits of cannabis, knowing your rights, and much more, mainly under the direction of our patient education chair, Chris Baker. We have offered court support, in many forms, to patients who have been charged under the CDSA. We have gathered at the church, Dalhousie University Student Union Building, and now at the North End Library on Gottingen St. We have held three annual Maritime Cannabis Conferences, participated in two Resolving Marijuana Prohibition tours with NORML Canada, and sent a delegation to the MMAR Patient Lobby Group convention to Ottawa in Jan. 2011 to mark 10 years of the failed MMAR.

MUMM has actively been involved in lobbying MLAs to provide coverage for cannabis patients and the QE-11 Health Sciences Centre to allow patients to vapourize their medicine while hospitalized. MUMM has been outspoken in the media battling media misconceptions, speaking out about issues pertaining to the MMAR, Bill C-10, court decisions, claiming cannabis as an income tax deduction, and more.
On Dec. 11, MUMM held our first ever Skype meeting and were joined by Amy Anonymous, from Toronto. Various ways to consume cannabis were discussed and we learned more about what was happening in Toronto in the activism arena. In 2012, we will be branching out and meeting with cannabis patients in NB and Newfoundland via Skype.

Eight years since incorporation, MUMM now has an active board of 15 members and a membership of over 330 patients and supporters. We welcome new members and volunteers.

To become more involved as we continue to shape the future of MUMM email me at chair@mumm.ca