Deprecated: The $control_id argument is deprecated since version 3.5.0! in /home/oq5ayjaeetjt/public_html/wp-content/plugins/elementor/modules/dev-tools/deprecation.php on line 304
 Cannabis in Costa Rica – Part 5 - Conclusion - Cannabis Digest
Skip to content

A future for Cannabis in Costa Rica

As we move into July, the Costa Rica Medicinal Cannabis Movement signature gathering campaign has surpassed 100K and are now seeking more in case of invalid or duplicate signatures. Costa Rica has only had one successful referendum in the past. The citizens decided by vote that they wanted a Free Trade agreement with the United States. The only successful referendum in British Columbia, revoking the HST, was similarly economic. A medical cannabis law doesn’t immediately effect all Costa Ricans, so will they see the need to vote for it?

Costa Rica is a very religious country. There are a few features consistently found in every town, a soccer field and a church. Pictures of the Pope are about as common as pictures of Queen Elizabeth in Canada. Many of the taxi drivers i rode with in the country kept small crosses of the crucifixion hanging from their rear view mirror for good luck. The Pope recently decried marijuana legalization, saying ‘with an evil there can be no yielding or compromise’. It was unclear if Pope Francis is aware of the medicinal benefits of cannabis.

Ernesto from the drug policy group ACEID admits that there is a lot of education that still needs to occur. There is need for the conversation to mature beyond the simple statements for or against, to include dialogue about how to treat drug use as a health care issue with respect to the different possible kinds of regulation. Jails are overcrowded with people who would be better suited under the supervision of health care professionals.

Ernesto believes that the stigma associated with drugs prevents officials from seeing the medical benefits through the smoky haze of the recreational culture. He feels that it is essential to distinguish medical from non medical use. The proposed law will allow growing a limited number of plants at home.  Currently the cultivation of 2 plants can result in a jail sentence. Ernesto told me of an elderly woman who had been arrested for growing 2 plants that she used to treat the symptoms of her cancer, she died in jail.

Patients are the best representatives for the cause as they tell the true stories of unnecessary suffering caused by the current laws. It is important that Costa Ricans can witness the impact on families in their communities to make an informed decision. I believe that as people learn about the safety and effective use of this medicine, they will see the need for compassionate action.

Doctors are also critically important representatives as they hold the trust of many people and can help articulate answers to the many questions that will be asked. Public debate needs to occur at Universities so that many of the general misconceptions can be cleared up for the coming generation of professionals. Doctors are planning to visit some of Costa Rica’s Universities in July. 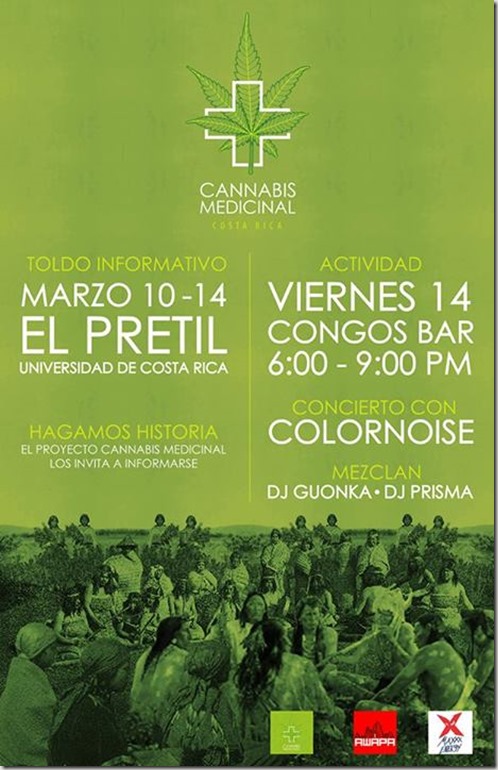 These youthful, ambitious drug policy groups are part of a worldwide momentum to end prohibition. ACEID (Facebook Page) is currently promoting the Support not Punish campaign to “raise awareness about the harms being caused by he criminalisation of people who use drugs”. They are producing educational documents on drug policy and health care to be distributed on the 26th of June, during a day of action and cultural activity that they are planning.

Similarly to North America, new drugs in Costa Rica are required to pass FDA standards. The Internationally recognized General Health Law, that has been establish in Costa Rica for over 30 years, demands that doctors, hospitals and pharmacists be the only professionals permitted to distribute medical preparations. In Canada, legal challenges to the constitutionality of the law have made cannabis an exception to the rule. The United States federal government continues to keep cannabis in a class of drugs too dangerous to be administered in the presence of a doctor.

The United States has invested heavily in Costa Rica. U.S. cannabis reform opponents like S.A.M. have raised the question of whether a referendum is the best process to authorize the use of a substance. It is only after insufficient effort from normal regulatory mechanisms (like the FDA) that a referendum is called upon to exercise the democratic right of citizens to progress with a popular idea. It would be hypocritical for the United States to find fault in Costa Rica practicing their democratic right to a referendum, since more than 20 U.S. states already have, two making cannabis completely legal. The International narcotics control board, who have come out in opposition to U.S. and Uruguayan reform, would likely oppose the move.

The proposed Costa Rican model includes participation from public hospitals, private sales through dispensaries, social clubs (vapour lounges) and an allowance for visitors with medical cannabis licenses to medicate while on vacation. 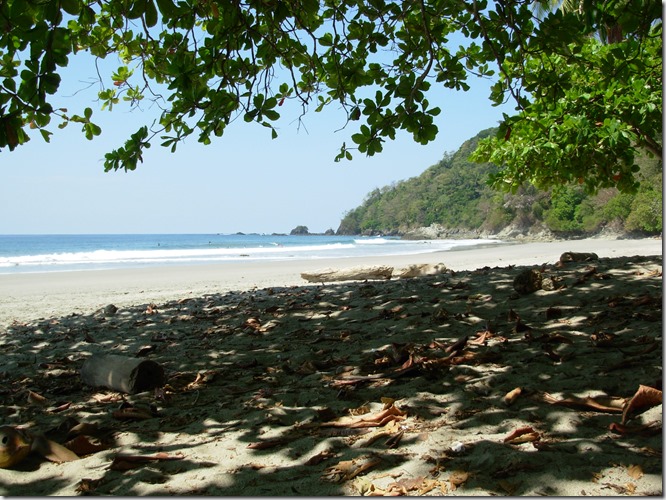 It was my pleasure to report about this beautiful country that I visited this year. I truly believe that medical cannabis would be a compliment to the Pura Vida (pure life) attitude of Costa Ricans.

Stay tuned to the Cannabis Digest Blogs for updates.

Kristen Mann Harvest time, the most exciting time of the year. For all you lovely activists out there overgrowing the government, thank you! You have worked hard all year to assert your freedoms, and now it is time to reap the rewards. If this is your first time growing, or even if its not, there […]

Those who have known me for many years are aware that I have consistently advocated for major reforms to Canada’s drug laws. The current perception of drug users as faceless criminals needs to shift to include neighbours, co-workers, and family members.  As patients, individuals require access to cannabis for legitimate medicinal purposes and/or compassionate health […]