The compound in Cannabis called Cannabidiol or CBD is causing a great medical and political debate about Cannabis. CBD has proven to be a near miracle medicine as it does not cause a high or euphoria and has apparently great medical potential in multiple applications all with unheard of safety in human use. CBD is proven clinically and experimentally to prevent disease and to treat current disease. The chart below is a portion of the knowledge about medical effects of the cannabinoids. There is a mountain of evidence far beyond what this chart begins to show.

CBD or Cannabidiol is a component of some, but not all cannabis. This compound is present if variable amounts, depending on the strain of cannabis and is proving to have remarkable, if not miraculous, medical applications. Why then is it illegal?  Why, would a substance that does not get you high, be considered a threat to our society? Obviously, there are no rational justifications to this question, and that may be the answer to the end of the drug war. Since this cannot be justified the politicians are being forced to change their anti-pot position.

According to the CSA or Controlled Substance Act; any product or extract or salt compound made from cannabis is considered illegal. That includes all forms of the plant including hemp. Any Cannabinoid is therefore illegal by the Controlled Substance Act. Hemp has all the cannabinoids including THC but the concentrations of THC are miniscule in the Hemp plant.  Until recently, you could not grow hemp in the United States, so no legal hemp was available for conversion to products made here in the U.S.; Hemp products produced outside the U.S., were considered legal as long as no THC was present. This included heat denatured hemp seed sold in bird food and other products.

Is CBD considered dangerous because it is a precursor to THC and people would chemically alter CBD to get high? Technically CBD can be converted to THC but this is a complex chemical reaction and is much more expensive than extraction of the CBD from the plant itself. There are no enzyme systems in the plant that converts CBD to THC. This means CBD is not a precursor to THC, but a separate end product in a chain of enzymatic reactions.

There is a common biosynthetic pathway leading to the production of THC, CBD and CBC. All three are created from a precursor called CBGA or Cannabigerolic acid. This Precursor CBGA is acted upon by one of three enzymes systems to convert CBGA to THC, CBD or CBC. The presents and relative quantities of the specific enzymes are what controls which Cannabinoid is produced by a specific strain of cannabis.  These enzyme differences are responsible for the different phenotypes of cannabis strains. This is the reason for the variability of concentrations of each of these substances in different cannabis strains. 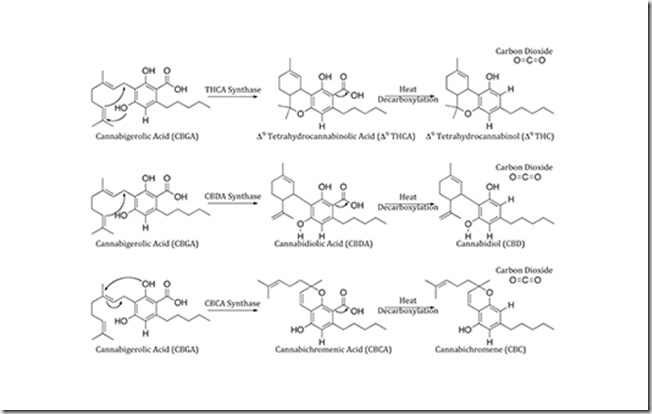 The internet has exposed the truth about the miraculous effects of CBD and Cannabis. This information was hidden prior to the accessibility to knowledge provided by the internet.  Prior to the internet, it was hard to disprove any of the Drug Wars propaganda.   Daily there is other medical evidence of Cannabis utility in treating Cancer, Strokes, Heart attacks, Diabetes and a host of other medical conditions, better than any current medical therapy. There are many news reports of children with seizure disorders being treated with CBD, where no other man made medicine has had success.  The politicians cannot ignore this information they would like to suppress. This creates a political problem when your constituents are the Industrial Prison Complex and you have to concede Cannabis has medical potential. It creates a cognitive dissonance when they have to admit the truth that conflicts with propaganda their income is based on.

Cannabis and all of its components are listed as a Schedule 1 substance. 1) Having no medical utility and 2) Not safe under physician supervision. To support the CSA the politicians must feign agreement with these two tenets of the scheduling system. Politicians can’t deny Cannabis has medical utility and can’t support the schedule 1, belief or assumption, that cannabis has no medical utility.  So much information about the miraculous effects of cannabis and CBD are bombarding the public, it cannot be ignored any longer. This admission is almost too much to ask from the politicians who have supported the drug war.

New Jersey’s anti-pot governor Chris Christie has had to change his anti-pot position to a more compassionate one because of one parent’s confrontation of the Governor. Brian Wilson, the father of Vivian Wilson who suffers from Dravets Syndrome, confronted Gov. Christie on a campaign stop. The new law the Governor was considering would ban all eatable forms of cannabis and oil. The proposed law would prevent the parents from obtaining the very medicine that would help the child.  Brian Wilson asked the Governor for help with his Daughters medical condition, which were relieved only by cannabinoids that would be given orally.  Governor Christi replied that “it is a complicated issue” The Father replied “Please don’t let my daughter die”.  This single incident may have been the deciding factor in the states new law that did include eatables.  This confrontation was an embarrassment for the Drug War and should be repeated “Ad Nauseam” by activist and other families denied cannabis as medicine. The politicians can no longer defend the un-defendable position the war on drugs is based on. (Marijuana having no medical utility and not safe under physician supervision)

Gov. Christie has made statements and still believes that cannabis use as a medicine is a medical front or a trick for complete legalization of pot. What-ever!

Ok, I would like to confess, and slightly digress in my discussion about CBD, to admit that I am personally using the use of cannabis as medicine, as a lame excuse for the complete legalization of cannabis. Yes, that’s right; I am the trickster that started all this hullaballoo about the medical utility of marijuana. I know I don’t speak for all cannabis activists, I do admit however to playing this trick on the smarter, “all knowing” pot-prohibitionist. There is a mountain of scientific information about cannabis and CBD treating and preventing Diabetes, Strokes, Heart Attacks, IBS, Crohns disease, Seizures and many other illnesses. I am deliberately ignoring that information and using the “excuse” that Cannabis has medical application so that people who are not sick can use it too! After all, Sick people can be trusted with cannabis for “medical” purpose, but well people cannot. (Heavy sarcasm for concrete people who believe that calling marijuana medicine is a trick for legalization.)

Mississippi Governor Phil Bryant signed into law a bill allowing marijuana-derived cannabidiol (CBD) oil for medical purposes. “The bill I signed into law will help children who suffer from severe seizures disorders,” Gov. Bryant stated.  “Throughout the legislative process, I insisted on the tightest controls and regulations for this measure, and I have been assured by the Mississippi Bureau of Narcotics that CBD oil (Cannabidiol) is not an intoxicant,” the tremulous governor said.

CBD oil is currently not available as a purified product in any significant quantities in the United States. Governor Bryant may have made this humanitarian effort only for show and not for medical relief.

CBD is not a pure extract and most preparations of oil contain THC and other cannabinoids and turpenes. Companies are now marketing Hemp Oil with high CBD and almost no THC as legal products in the United States. The pitch is that their product is from industrial hemp extract and that the oil produced is devoid of THC and therefore legal in all 50 states. The sales pitch would make you think that you have little risk possessing these products, others who profit from marijuana prohibition would most likely disagree. Although CBD is technically illegal it is becoming harder and harder for politicians to justify their unjustifiable position of incarcerating cannabis users.

What politicians don’t understand is that Cannabis and its components are not pharmaceuticals but are better termed Nutraceuticals. Nutraceuticals are products derived from food sources that are purported to provide extra health benefits, in addition to the basic nutritional value found in foods. Cannabis best medical value may be in the use of it as a nutritional adjunct. When eaten raw and unheated cannabis provides acid varieties of the cannabinoids that have additional amazing medical utility and don’t get you high. The future of cannabis as medicine is the inclusion of cannabis in our daily diet.

Humans will disobey any laws that prevent them from self help because of the natural instinct of self protection. The trial of Randal v United States which established the Investigational New Drug Program was the first to recognize this concept. The Judge cited that any reasonable person would deliberately break the law if following the law would mean losing your eyesight. Robert Randal’s growing and use of cannabis to prevent loss of sight from Glaucoma was reasonable because no other legal pharmaceutical was working. The court recognized this human nature pattern of self preservation that no law could correct. You can’t pass law that prevents me from helping myself or my family! Truly this is the foundation of the War on Cannabis. This is why the current prohibitionist laws are doomed. These laws are against human nature of self preservation.

Cannabinoids are like super vitamins that your body needs to function properly. If you have defects in your own Endocannabinoid system, you might benefit from augmentation of your deficient ECS by using plant cannabinoids to replace your deficient, natural Endocannabinoids. The future of medicine is in eating raw cannabis products on a daily basis to prevent disease like Diabetes and decrease the severity of other disease like stroke or myocardial infarction.

What then is the legal status of CBD in the United States? The times are changing, but currently CBD is illegal to possess unless you are a lab running standards.  Will they eventually recognize the medical utility of CBD and other cannabinoids? Will they understand prohibition does not work? You think?