Deprecated: The $control_id argument is deprecated since version 3.5.0! in /home/oq5ayjaeetjt/public_html/wp-content/plugins/elementor/modules/dev-tools/deprecation.php on line 304
 First ever Medical Cannabis case to reach the Supreme Court of Canada - Cannabis Digest
Skip to content 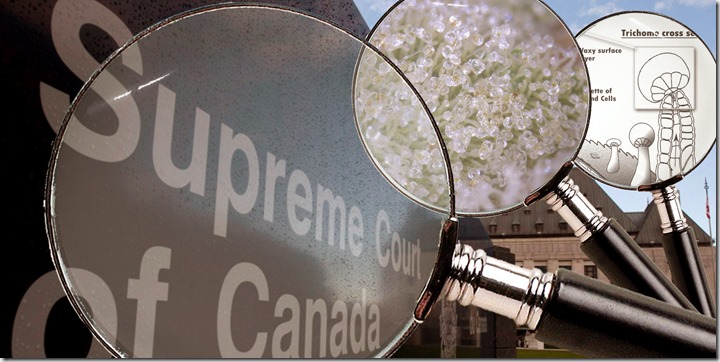 Last thursday we heard the news that my medical cannabis extract decision has once again been appealed by the Canadian Government. It is now destined to become the first case to present evidence regarding medical cannabis to the Supreme Court of Canada. The supreme Court does not typically accept new evidence and the government has not challenged the scientific facts of the trial.

Read for yourself the unchallenged scientific facts that were accepted by Justice Robert Johnston of the BC Supreme Court in April of 2012.

From Dr. Pate’s evidence I accept:

The active compounds of the cannabis plant are manufactured in cells at the base of, and stored in structures called glandular trichomes.

Viewed microscopically, the glandular trichomes appear to be stalk rising from the plant surface with a globular top. Dr. Pate accurately analogized this structure to a golf ball on a tee.

These glandular trichomes contain resin, and it is in the resin where the plant secretes THC and CBD.

The highest concentration of glandular trichomes is found on or near the outer surface of unfertilized female flowers.

From the perspective of either a medicinal or recreational marihuana user, it is the contents of the glandular trichomes that are important.

Both these methods remove the glandular trichomes intact, with the resin still contained inside.

The results of fat-based extraction methods are often referred to as “cannabis cooking oil” or “cannabis butter.”

Other methods involve using petrochemical solvents suchas petroleum ether to take up the resin from the glandular trichome, then evaporating off the solvent.The results of the solvent-based extraction method is often called “hash oil.”

These methods result in separation of THC, CBD, and other potentially active ingredients called terpenes from the plant matter.

A caveat on that statement is the possibility that there may be some cannabinoid inside a leaf, not as readily accessible or as easily rendered as the glandular trichomes on the leaf surface.

The medical benefits from THC include anti-inflammatory and anti-spasmodic effects, increasing appetite in those whose appetites are suppressed by medical treatments such as are administered to AIDS patients,and alleviation of nausea in those taking chemotherapy for cancers.

The well-known non-medical effect of THC is its psychoactive effects, an unwanted side effect from a medical point of view, a primary benefit from a recreational user’s point of view.

CBD has some anti-inflammatory benefits, including some analgesic effects.

There may be some potential anti-psychotic benefit from CBD in high doses, but that has not yet been fully studied.

The glandular head of the trichome also is known to contain terpenes.

CBD also has some potential to inhibit the metabolism of THC by the liver, thus reducing the body’s ability to intercept and eliminate the medical benefit of THC.

There are different mechanisms for getting the therapeutic components, whether THC or CBD into the body, and Dr. Pate described each.

One can ingest the compound orally: if one were taking THC for gastro-intestinal conditions such as Crohn’s disease or Irritable Bowel Syndrome this would arguably deliver the therapeutic benefit more directly to the site of pathology.

Oral ingestion also has the benefit of prolonging the effects of the drug in the system, with the corresponding detriment of taking longer to build a therapeutic level of the drug than would occur with smoking, for example.

Because of the slow build-up of the drug in the body,dosages are more difficult to manage, as it takes sometime to determine when the optimum therapeutic level has been reached.

Because orally ingested THC or CBD stays in the system longer, it would be better for someone with a chronic condition of pain or glaucoma, where some level of therapeutic dosage would remain while the patient slept.

Smoking achieves a far quicker benefit, as the drug enters the body through the lungs and is dispersed rapidly.

The level of THC in the body also declines much more quickly with smoked marihuana than with orally ingested THC.

Smoking would be a better way to take a therapeutic dose in case of a sharp increase in pain or discomfort.

Smoking also has harmful side effects associated with inhaling smoke which, although less deleterious than tobacco smoke, pose risks to health nonetheless.

A fourth application or ingestion method would be to spray a solution containing the active compound under the tongue, called trans-mucosal. Its advantages include faster assimilation of the drug, like smoking, without the risks associated with smoking.

There are some cannabis, or similar, products that have gone through the clinical trial process and become available.

One is Sativex, an extract of the cannabis marihuana plant that contains THC and CBD in equal proportions, taken as an oral spray.

Another is Marinol, a synthetic THC in a sesame oil capsule.

Another is Nabalone, similar to Marinol.

There remains a risk that a cannabis compound mixed with another drug, like an opioid or alcohol, can have worse results than either drug alone, and as well, the risk that the psychoactive effects of THC can adversely affect judgment, perception and reaction in those operating automobiles or dangerous machinery.

However one takes the active compounds in cannabis marihuana, it is unlikely that one will suffer any long lasting harm from an overdose.

There is some potential for terpenes to have a role in the efficacy of cannabinoids, but this also needs much more research.

The cannabis marihuana plant and its active compounds are unlikely to cause physical harm in themselves,unlike other drug compounds where taking too much can lead to death.

It is not possible to tell by looking what the contents of a cookie might be, or what concentration of THC a capsule of oil might contain.

Women in Weed – Experiences in the Cannabis Industry