Deprecated: The $control_id argument is deprecated since version 3.5.0! in /home/oq5ayjaeetjt/public_html/wp-content/plugins/elementor/modules/dev-tools/deprecation.php on line 304
 UVic 420 Holding Its Ground - Cannabis Digest
Skip to content

After 16 years of weekly 420 circles at the University of Victoria campus security are still making appearances trying to stop the UVSS Hempology 101 club from protesting.  However, the club has held firm, despite the my arrest for trafficking in 2000 and smoking bylaws that came into effect in 2011.  Last week, though, the group was approached by a single campus security officer who seemed very intent upon stopping anyone from smoking cannabis, citing the federal possession laws and threatening to harass students.

With so many years of experience dealing with police and various types of security guards I feel very confident dealing with people in uniforms.  Sometimes security guards and campus cops can be more aggressive and rude than police, who are generally very professional and polite.  They all thrive upon the fear that a uniform can cause and are not used to dealing with large groups of non-compliant citizens.  Since I have no fear of them or the law, and they usually fear at least losing their job, the balance of power often lies in my favor if I keep my cool.

While I was able to convince this campus cop that he needed back-up and a better plan if he wanted to stop such a large group from breaking the law, there is no guarantee he will not be back today with either police or more campus cops.  This was the first time in sixteen years any campus cop approached the 420 to tell me that we were breaking federal laws and that students could face severe consequences for doing so.  We have had multiple interactions with campus cops for years since I was first arrested and they have never threatened us like that, which is a concern. 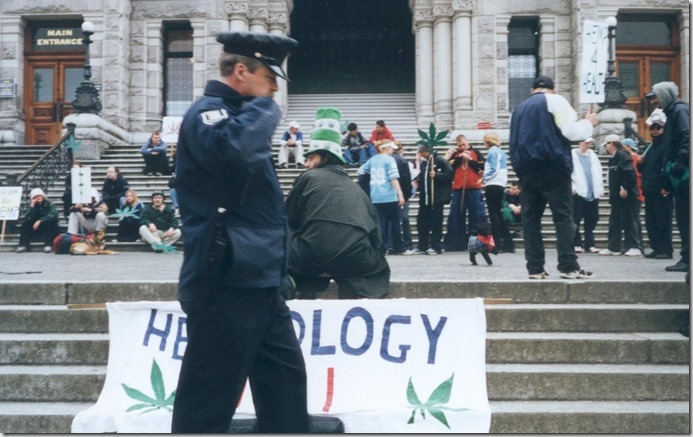 When I was arrested in Nov 2000 the police did not even grab me in the circle, instead doing their deed in the parking lot when I was leaving.  They told me that students would never return after hearing I had been arrested.  After the incident made front page news, however, the students showed up in larger numbers than ever the next week.  It was funny how the arrest made the group much more popular than before and when I finally returned over 4 years later, Hempology 101 had become one of the largest clubs on campus.

Since that time campus security have approached the group in regards to several issues, including two times we have called an ambulance to help someone in medical distress.  One time a campus cop stood behind me and waited until I did not have a joint in my hand before kindly asking us to move a little farther away from the building, as smoke was somehow drifting in!  Even when discussing the smoking bylaw, campus police never threatened harassing students with possession charges until last week.

One of the most ironic circumstances I have experienced was getting the former head of campus security, Hunter McDonald, to speak at the 8th Annual Cannabis Convention.  He was present when I was arrested and after he told me I would not be allowed on campus again until the conclusion of my trial, I promptly informed him that not only would I be back but that I would be teaching before he retired.  His appearance at our convention generated lots of local media attention and seemed to begin a new era of cooperation between the club and campus security.

Until last week the campus security had claimed it was the administration that was forcing them to act, which is why it seems like such a big change in tactics.  When the smoking policy was brought into effect 3 years ago, security were constantly speaking to us about the rules, telling us that it was okay to get together and smoke cannabis in protest of the federal government but that we had to do it by the Student Union Building.  In response we organized a referendum for the entire student body to vote on and we won by a slim margin, proving that the 420 in the center of campus was a  student tradition, not just a tradition of our club.  With this referendum behind us we marched back to the center of the university, where we had several more interactions with campus security but only about the smoking policies. 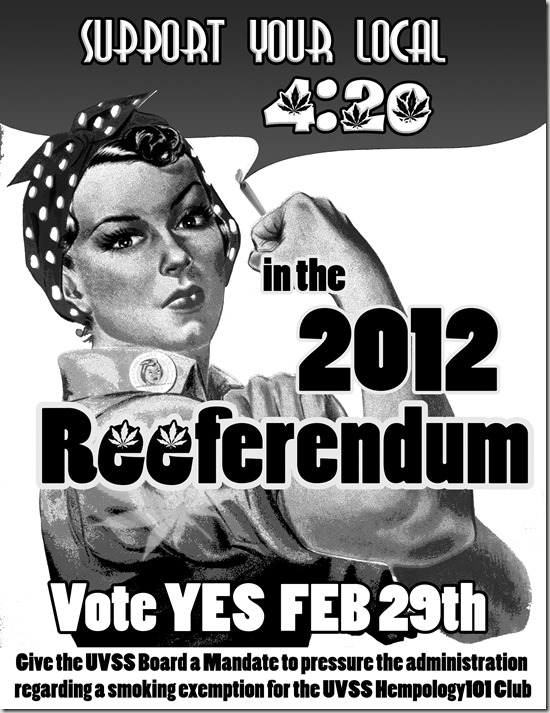 If campus security bring uniformed police to the circle it would definitely have a chilling effect upon the group but it could backfire against the administration.  Certainly none of us want to get arrested and we will do everything possible to protect the students against both the federal law and university administration, which can cause a lot of problems for students, especially foreigners.  Hopefully students will follow my lead and not light up in front of any officers, as we have far better ways to disarm them.  Humiliating the authorities for wasting precious time and energy worrying about a bunch of students peacefully smoking a herb is a very effective way of getting officers to leave and stop acting like they are well-paid babysitters.

Any attempt to attack the 420 meetings and threaten the students will be met with a lot of press and multimedia attention.  Everyone has a cell phone these days, so any heavy handed activity by police or campus cops will be very well documented and exposed around the world.  If the university wants to maintain an image of being progressive and friendly, then any such approach could prove a nightmare for them.

Personally, getting arrested again might actually help my career, as book sales have slowed down.  It is not for my own safety that I hope the police and campus cops do not show up again today, or any other day, but I do not want them threatening to jeopardize the academic future of these young students who are mostly there for a fun, social gathering.  One thing is for sure, the 16 year history of weekly 420 circles at the University of Victoria will not come to an end anytime soon with the commitment the students and activists have shown.

Wednesday Sept 14, 2016 Victoria, B.C. Cannabis legalization offers all British Columbians an opportunity to benefit from the multi-billion dollar market that has been created here by cannabis activists over decades.  In an attempt to bring together a wide range of individuals and organizations that are working hard to educate the public about cannabis, The […]

Feb 12, 2021 – URGENT need for more letters of support for the VCBC Exemption application