Deprecated: The $control_id argument is deprecated since version 3.5.0! in /home/oq5ayjaeetjt/public_html/wp-content/plugins/elementor/modules/dev-tools/deprecation.php on line 304
 Interview with The Dutch Office of Medicinal Cannabis - Cannabis Digest
Skip to content

van de Velde: In 1998, the former minister decided to set up the bureau. But because of the regulatory and legislative work associated with the drafting of a new government agency, it took until 2001 before the office was actually installed and only in September 2003 came the first MC on the market.

Dewals: What are the different functions of the DOMC?

van de Velde: Firstly, we guarantee the quality of the MC. For this, we carry out controls our self but independent research laboratories do them as well. Secondly, we ensure that a stock of MC is available. We instructed a grower whom must meet certain requirements. For example, he must ensure that he delivers standardized products. This means that it is always the same product, with the same levels of active ingredients, especially THC and CBD, that he cultivates and delivers. Finally, we appointed a logistics service provider who ensures the packaging and organizes the distribution of the MC. So the DOMC acts only in the control of the product and outsources the other tasks. 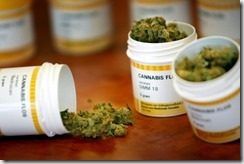 Dewals: Do the pharmacies that offer MC have a specific license?

van de Velde: No, MC is treated the same way as another drug that falls under the Opium Act. All pharmacists may have it in their shop but they are obliged to keep it in a safe, such as morphine-like drugs. Every Dutch pharmacy has to serve its clientele with the medications prescribed by her doctor even if it is MC. Obviously, MC may only be issued if a doctor writes out a prescription for it. Any doctor can do that, he must not follow a specialization or compulsory course. The responsibility lies with the physician to acquire the necessary knowledge about MC. The DOMC provides regular workshops and doctors and pharmacists are welcome to participate. But this is no obligation. The doctor departs from his normal professional ethics and asks himself the question whether MC might help a patient. As this should be done for any other drug. Often MC will not be prescribed as a first option medicine. It is rather mentioned when people did not have relieve with other medications.

Dewals: What’s the profile of a medicinal cannabis user?

van de Velde. That is very diverse, users are usually between twenty and seventy years old, the indication varies from neuropathic pain, chronic pain, multiple sclerosis and fibromyalgia (connective tissue disease). Those are the large groups of MC users. However, sometimes it is used with other diseases or symptoms as well. The physician is free in his prescription. Currently, the BMC provides five different varieties of MC. The difference is mainly in the THC and CBD content of the product. The majority of patients use Bedrocan which has a THC content of about 20% and a CBD content of <1%. We recently started a new product called Bedrolite with less than a 0.5% THC and approximately 9% CBD. Based on patient feedback we refine or we cultivate new varieties of MC.

Dewals: The DOMC recommends two methods of intake. On the one hand via a vaporizer on the other hand via tea.

van de Velde: Right. We recommend not to smoke MC because toxic substances are hereby released and inhaled. It is better when the patient uses MC via a vaporizer, which turns THC-acids into THC at a lower temperature, about two hundred degrees, then when you burn it. In this way he avoids inhalation of harmful toxic substances when MC is smoked. With a vaporizer, the body takes THC in through the lungs, and ensures a quick absorption and working of the MC. When you drink MC in tea, the absorption is done via the gastrointestinal tract and it will happen more slowly. In addition, the tea is heated only to a hundred degrees. So, there is a much smaller conversion to THC and the patient will absorb more THC-acids. The two different methods can therefore lead to a different effect. It takes time and experience to find the right dose of MC. The patient strives for a dose and intake frequency in which he builds a therapeutic THC level in his blood. The user should not interrupt the use of MC but has to use it continuously as prescribed by the doctor.

Dewals: Your brochure lists a whole list of symptoms or diseases in which MC can help; therapy resistant glaucoma, weight loss, phantom limb pain, multiple sclerosis, Gilles De La Tourette’s syndrome and others. Is there a scientific basis for this?

van de Velde: The BMC supports in drawing up this list on various scientific articles, review articles and meta-analyzes. Important criteria are that the scientific test was carried out in an adequate manner and a positive therapeutic/clinical  effect was shown. We check regularly whether new scientific research have been published showing that MC can serve with other complaints. When this happens we correct our list of diseases, but it does not often happen.

Dewals: The list is not exhaustive, there may come new indications?

van de Velde: Indeed, and I know that patients use MC in indications other than those in our list. A doctor in the Netherlands is free to consider MC in other indications and prescribe it. The trust and communication between patient and physician is paramount here. For some complaints, the therapeutic/scientific effect of MC is not yet fully established. However, patients sometimes have good results when they use MC, even then a doctor can prescribe MC, for example in Crohn’s disease, epilepsy, migraine and so on.

Dewals: Are there diseases in which one does not prescribe MC?

van de Velde: We do not recommend to prescribe MC in people with psychological problems or a psychiatric illness, at the time of their demand. In heart patients and pregnant women, the latter are obviously not sick, we don’t recommend it neither. But again, a doctor is in principle free to prescribe it. Moreover, there is no defined minimum age for the use of MC. A teenager might get it prescribed, but I never encountered it.

Dewals: Are there health insurers that repay the prescribed MC?

van de Velde: This varies greatly and is dependent on the health care provider. Some indemnify partially, others not at all, and still others compensate it completely. It may also be that the insurer only reimburses MC for certain indications or a maximum amount per year but it is never in the basic package and there are many MC users affected by this.

Dewals: Please compare MC when you look at price and quality with drugs based on THC as Sativex?

van de Velde: This is a difficult task. I must start by saying that Sativex is not available and is not reimbursed in the Netherlands. I think its price is more expensive than the MC that we make available in the pharmacies. In terms of quality, I can not say whether MC or Sativex is better. It is important to know that in MC there are other cannabinoïdes present than THC, which we know influence each other’s therapeutic effect.

Dewals: Can a Dutch pharmacy serve a Belgian patient with a prescription for MC?

van de Velde: Yes, but the problem is that this patient can not take the MC across the border to Belgium. But if the Belgian authorities would consent to it, there was no problem. The DOMC exports MC to pharmacies and research centers in several countries such as Belgium, Italy or Germany. In Germany, for example, no one is authorized to cultivate MC. Thus we export MC to German pharmacies where they divide it. But this is done under the supervision and with the approval of the German authorities who have to deliver the import license.

Dewals: The Belgian Minister for Health Maggie De Block, herself a doctor, states that there is no scientific basis for MC. According to her, only Sativex works and only in MS patients. What do you think of her statement?

van de Velde: We as DOMC have a lot of contact with patients and they often tell us that they have been helped well with MC. It is important to know that these people are not looking for an intoxicant but a means to eliminate the symptoms of their illness. Often people who were not helped with regular drugs find relief with MC. We often get messages at the DOMC from patients thanking us because their life took a very positive turn after the start of MC. That’s why we do it, to help the patient. In addition, there is research that shows therapeutic efficacy of THC and CBD, the major components of MC, and this demonstrates not only in MS patients. So our experience is different. I would like to refer to www.cannabis-med.org website for this data and the Minister could investigate them.

(article previously appeared at The International)

On December 3rd, 2014 I attended The Cannabis Seminar on my home island of Salt Spring, BC. It was presented by Dr. Paul Hornby of Hedron Analytical and Neil Morgan of the newly created Canbis Nutrameds. The event offered Salt Spring Island a rare opportunity to meet other community members with an interest in cannabis. […]

Cannabis Carols are Coming to Town

Cannabis Caroling has been an annual staple of the International Hempology 101 Society‘s community activities for many years. As always you are invited to join the crew for a smokin’ sing out on Wednedsday, December 21st outside The Ministry of Health (Blanshard and Pandora) in downtown Victoria. Starting at 4:20. To get a sense for what to […]