Well it appears as though I will be writing the “Updates, Etc.” article in each issue now, taking over from my love, Gayle Quin, who is struggling with her health.  She will continue writing a personal note with each issue. 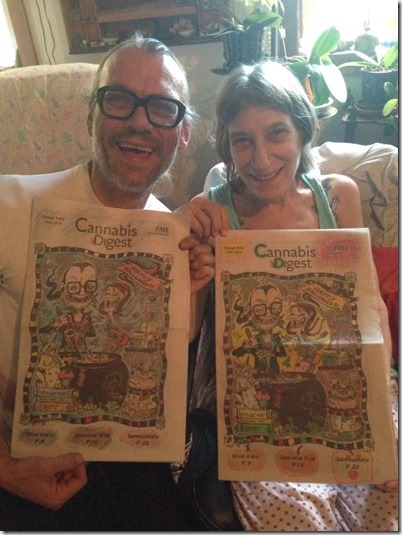 (Ted and Gayle coloured Issue 42 of the Cannabis Digest)

This newspaper may not have existed without her.  She was the one who, in 2003, strongly insisted that the Victoria Cannabis Buyers Club create a newsletter.  After surviving 4 police raids in 2002-03, the VCBC needed more than ever to communicate with its membership.  Our first issue was no more than a large photocopied sheet folded in half to make 4 pages.

Soon after Owen Smith was busted for making cookies we turned our newsletter into a national newspaper; we knew that this case would have huge implications, and wanted to make sure the public understood what was happening.  Now that we are going to the Supreme Court of Canada in March, having won at every other level of the judicial system, our hard work creating this paper is starting to pay off.

While there is virtually nothing any of us can do to help our lawyer Kirk Tousaw in court, we can support the Victoria Cannabis Buyers Club financially by helping to pay for some of the court costs.  Members of the VCBC have paid for almost all of the costs of the trial so far.  Given that the potential benefits stream far beyond our group, this burden is unfair.  Hopefully others interested in seeing changes in these laws will help fund this critical court case.

As for the club itself, everything appears to be going smoothly.  It has been two years since I turned it into a non-profit society and let it function on its own.  In late fall the club held its second Annual General Meeting, with all of the incumbents getting re-elected, along with the addition of Ron Vanzetta.  While the transition to a non-profit was rather unexpected at the time, it certainly appears as though the club is positioned very well for the future. 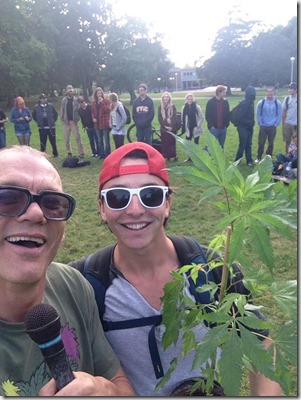 In the fall the International Hempology 101 Society, the owner of this paper, also held its AGM, with several new faces joining the team.  It has been a tough year for our board of directors, as the strain of trying to carry on the weekly meetings last summer caused a handful to step back from the group.  Now with a revitalized board we are still focused on a few solid projects.

Since I have had to withdraw from a lot of my work in Victoria it has been a struggle for the society to continue the 420 meetings at UVic, but nevertheless the crew is making sure it happens every Wednesday.  If you know anyone who might be interested in speaking at a 420, please feel free to contact us, as we are always looking for guest speakers to fill the void I have left behind.  This has been the first year in a decade without my UVic lectures, and it feels weird.  But the students love the 420 gatherings and it will continue on forever, one way or another.

The first thing we will do this year, in late January, is help the VCBC celebrate its 19th birthday.  Not sure what is planned at this point, but if you are a member you should watch the white board in distribution for updates and announcements.  Hard to believe it was 19 years ago I started all this but the facts speak for themselves.

It is also hard to believe that we will be at the centre of the first medical cannabis case ever before the Supreme Court of Canada.  But on March 20 as Owen Smith heads to Ottawa to fight for cookies, that is exactly what is happening.  More specifically, Owen’s case is very important to people for two reasons.  First, his case should assure that patients gain legal access to cannabis derivatives.  Second, his case will affirm that no one can be convicted of an unconstitutional law. Talk about huge! 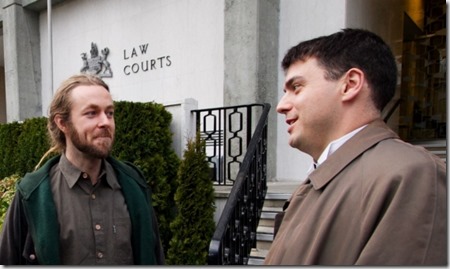 (Owen Smith and Kirk Tousaw outside the Victoria Courthouse)

So our group needs to fundraise.  There will be several attempts to raise funds, some online via Facebook but mostly in Victoria.  These will focus mainly on March 17, International Medical Marijuana Day.  We plan upon holding our annual silent art auction at the VCBC, so feel free to come by the club in March and place a bid.  Other activities will be announced when everything is confirmed.  This case is costing the members of the club over $100,000, so any donations coming in from the public are greatly appreciated.

Finally, a reminder to everyone that we publish a blog every single day on the Cannabis Digest webpage.  Over the winter holidays we released our cannabis carols, including a new one I wrote called I Saw Mommy Puff With Santa Claus.  Seriously, though, our blogs are increasing in popularity every month as we have gathered an excellent team of writers to share their thoughts about this fascinating scene.

Digest Admin·August 13, 2014
There are no comments yet No comments

How to date a non-toker