The recent raids on medical cannabis dispensaries in the cities of Nanaimo and Toronto remind us how tenuous is the situation for storefront providers of cannabis medicine. They depend on the charity, good will and enlightened attitudes of city councillors, law enforcement agents, health officials, neighbours, and anyone else with clout. Doctors remain uneducated; and scientists and journalists range from supportive to damning. There is no solid ground. Recent Canadian court cases have determined that cannabis may be consumed in Canada in a variety of ways; and that forcing patients to buy from LPs is not in keeping with their rights as laid out by Section Seven of the Canadian Charter of Rights and Freedoms, namely, the rights to life, liberty, and security of the person. But Supreme Court judges can offer little remedy for the ignorance and meanness of local authorities when they mouth support for cannabis but obstruct patient access.

And judging from the number of raids in Toronto (43), obstructing patient access was probably their greatest overall effect, maybe even their key effect. Legal cannabis is useless to patients if it is not accessible. This point was emphasized in 2003, in the case of Hitzig v. Canada, where the Ontario Superior Court ordered the federal government to arrange for legal supply. It was clarified further in 2015 when the Supreme Court of Canada affirmed patients’ rights to consume cannabis extracts. Then in 2016 in the case of Allard v Canada, the BC Federal Court acknowledged dispensaries as central to patient access, and as noted earlier, pronounced it unconstitutional to force patients to buy from LPs, or to deny them the right to grow plants. If you stitch these decisions together you should not be able to find your way to raiding dispensaries, arresting people, stealing their inventory, and flaunting the catch at a press conference for every world nation and enterprising extra-terrestrial to see. Unless, of course, you still have no idea what access means. Or you do, but rely on the ignorance of the general population to push an undeclared agenda. 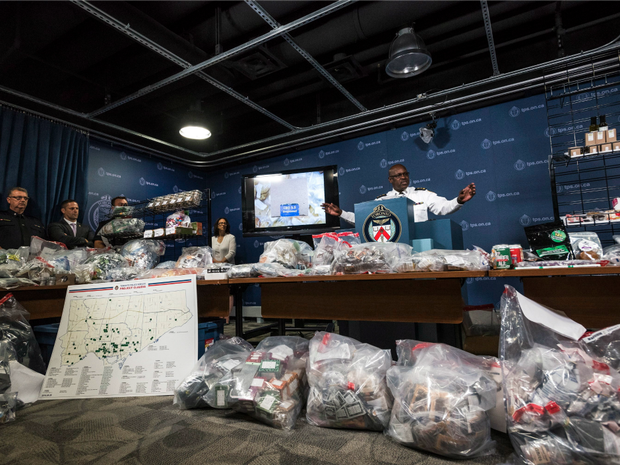 If you need cannabis concentrates, capsules, suppositories, tinctures, topical salves and ointments, or edibles, you must make them yourself, or go to a medical cannabis dispensary. These medicines are not available elsewhere. Many patients are too ill to make medicines, and making concentrates at home can be dangerous, so dispensaries are the best access points. Yet this past week, Toronto Police Chief Mark Saunders (successor to Bill Blair) prefaced his post raid remarks by saying that the raids were not about attacking lawful access to medical cannabis. Lawful access as the Toronto police see it, is access via LPs. Has it not just been established that forcing patients to buy from LPs is unjust? And what of the specific medicines? Doesn’t some authority in Toronto know anything about them? Herein lies the folly of appointing law enforcement officers as gatekeepers to medicines. They have no feeling for the subject, and no appropriate training.

The raids were about public safety. That’s what the police chief said. Apparently not all of the medicines available at Toronto dispensaries have labels listing milligrams of THC. Not all, in other words, have been lab tested for potency. This failing is hardly a tragedy. When Colorado first legalized cannabis, little product was tested because there were hardly any labs. Now there are more, so there is more labeling. Not all cookies sold at BC dispensaries list mgs of THC. Some list servings per unit. That method works. Some LPs have in house labs; and all have access to accredited labs. But until recently, few dispensaries had access to this kind of testing. Labs are not in the business of harm reduction; most will not touch an illegal drug. Vancouver has only recently acquired a lab that will test for anyone. Ditto with Vancouver Island. These practices will change as regulations set in. Until then, familiarity with the strains and edibles from one’s favourite dispensary, and access to educated staff will continue to do the reasonably good job they have always done. Truly, we don’t even know if THC is the important thing to measure. Gas and liquid chromatography, the lab techniques currently used for testing, date only from the mid 20th century. 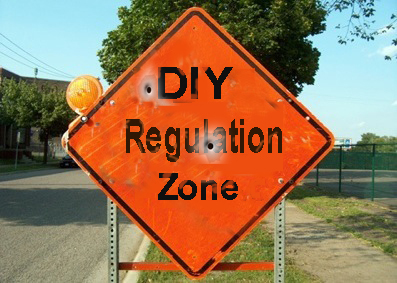 Cannabis has existed as a folk medicine since antiquity, and no public has been at risk. As to contaminants, molds and fungus can be seen by anyone under a good magnifying glass. Perhaps the larger problem is that people in North America have become accustomed to counting everything they put in their mouths: calories, grams of carbohydrate, fat, protein, salt, fiber, and other such items. ‘Fitbits’ will count your steps, your body fat, and all the rest. This practice has spawned an obsession with numbers, but I rather doubt that it has made anyone healthier. I’m all for testing if that’s what folk want. It may even serve patients dramatically better than the older system. Meanwhile no one is in danger, except from bad policies.

But, says Saunders, no one seems to know where some dispensaries are getting some of their cannabis. It could be from the black market. Rest assured, someone knows. The brokers know, and the dispensary owners know. Black market growers are growers with no government-issued license. They are individuals, not a category. Some have been winning cannabis cups, breeding high CBD plants for young patients, and advancing the science of growing for medicinal purposes. Before there were dispensaries, people bought their medicine from other local sources. They were our Black Market. If I were a dispensary owner, and sourced cannabis from an unlicensed grower with a fine track record, I would not provide his or her name to Mark Saunders or any other police officer. If I did I’d be putting the entire supply chain at risk, along with the patients. As to the public, what its members need is familiarity with cannabis as medicine. That knowledge is available through the more experienced dispensary staff. They’ve been around for over two decades. Truly, Saunder’s dramatic display is little more than cheer leading for LPs plus a ‘safety’ veneer. The real question is: Will his campaign work? 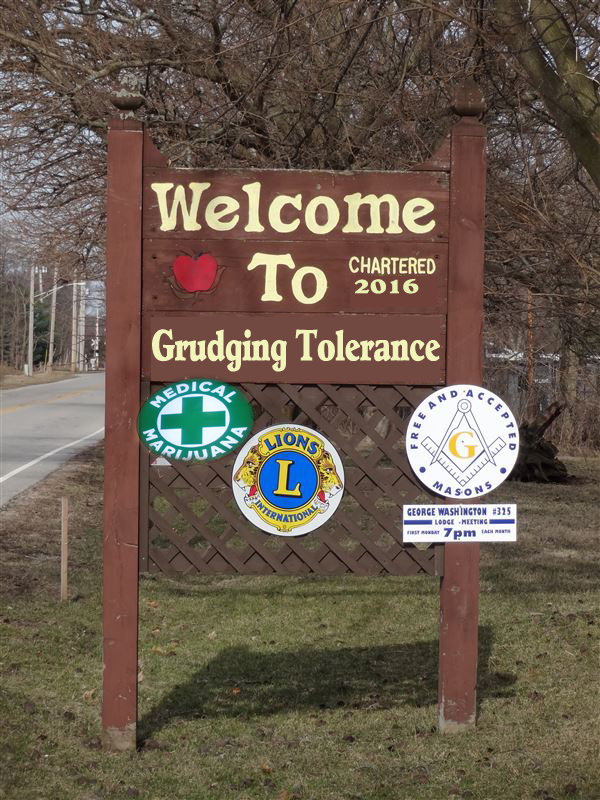 Of course it isn’t just Saunders. Representatives from Canopy (formerly Tweed), Mettrum and other LPs have trucked out the same assertions: no testing, mysterious sourcing, Red Alert! So have some Toronto City Councillors. Outside of the National Post and Toronto’s Now Magazine, the media have mainly added fuel to this fire. They persist in calling dispensaries ‘pot shops,’ and cannabis medicine, ‘pot medicine.’ Perhaps we should start calling opiates ‘junk medicine,’ and stimulants ‘speed’ medicine. It might clarify the picture.

In general, too much public discourse on cannabis medicinal or recreational has been marked by disrespect. Saunders addressed his press conference using the phrase, ‘so-called medical dispensaries.’ These were, in his view, recreational shops looking to cash in on the medical idea. It is likely that some were just that. But no one can say precisely why this condition is dangerous. What plagues cannabis is the notion that it is a ‘drug’ in some sense that does not apply to alcohol, caffeine, and tobacco. It is thus counted as a deadly sin, or some equivalent. Blurring the lines is the fact that cannabis is simply enjoyable. As a medicine it soothes inflammation, eases pain, relaxes muscles, and lifts soggy spirits. It does not come with a long list of creepy side effects. And it is enjoyable. This happy fact drives the resident prohibitionists mad, and leads to a cascade of accusations. People who demand this medicine, they claim, just want a joy ride. Why we should deny arthritis sufferers a joy ride I have no idea. I doubt that anyone else does either. But it is how we have been taught to think. Maybe we should stop expending energy on cordoning off medical from recreational cannabis consumption, and trying to explain the difference. It probably won’t help. A medicine that is enjoyable to take is not, in the short run, going to be a medicine easily endorsed by medical experts. They’re never going to be able to measure where the medicinal effect ends and the enjoyment begins. So there’ll be no tweaking the dose to remove the latter. They’ll never find a failsafe method to separate genuine patients from people feigning illness. That will raise the hackles of medical insurers. And, if there is compassionate pricing for patients, of tax collectors too. I say we adopt the view that cannabis is fun and safe, and leave refinement to future, perhaps less hysterical eras. The war on drugs appears to have blown a hole through large sections of this one.

Disrespect marks federal Liberal attitudes as well. We are two and a half months from Ottawa’s upcoming announcement of its new medical cannabis regulations, and a year away from hearing about the general plan for legalization. But the expertise of long time activists has no place at the planning table. Under such circumstances, one has little choice but to view the upcoming regulations as tool kits meant for tinkering with them, and for sculpting the future—the activists’ future. This summer is likely to be a time for court challenges for the medicine providers of Toronto. The fall may see us all in an uproar. What will happen to the Cannabis Growers of Canada, a.k.a. the MMAR growers? They were never authorized to provide product to dispensaries, but their actions are compassionate, and serve the needs of patients. And dispensaries? They are only authorized where city governments have moved beyond prohibition. And home growers? Real estate dealers like to promote the idea that cannabis contaminates houses in which it is grown. And what will be the role of the LPs, liquor stores, pharmacies, and unions? Let us take a moment to thank the stars for the soothing effects of cannabis; we are likely to find ourselves in a regulatory construction zone for years to come. Perhaps we should think of legalization as a twenty-first century project, and pace ourselves accordingly. Meanwhile we should seek diversion. There are upcoming cannabis picnics, festivals and conferences. I plan to sign up any day, just as soon as I place my order for extra journals, pads of paper and sharpened pencils.

Digest Admin·August 4, 2017
There are no comments yet No comments